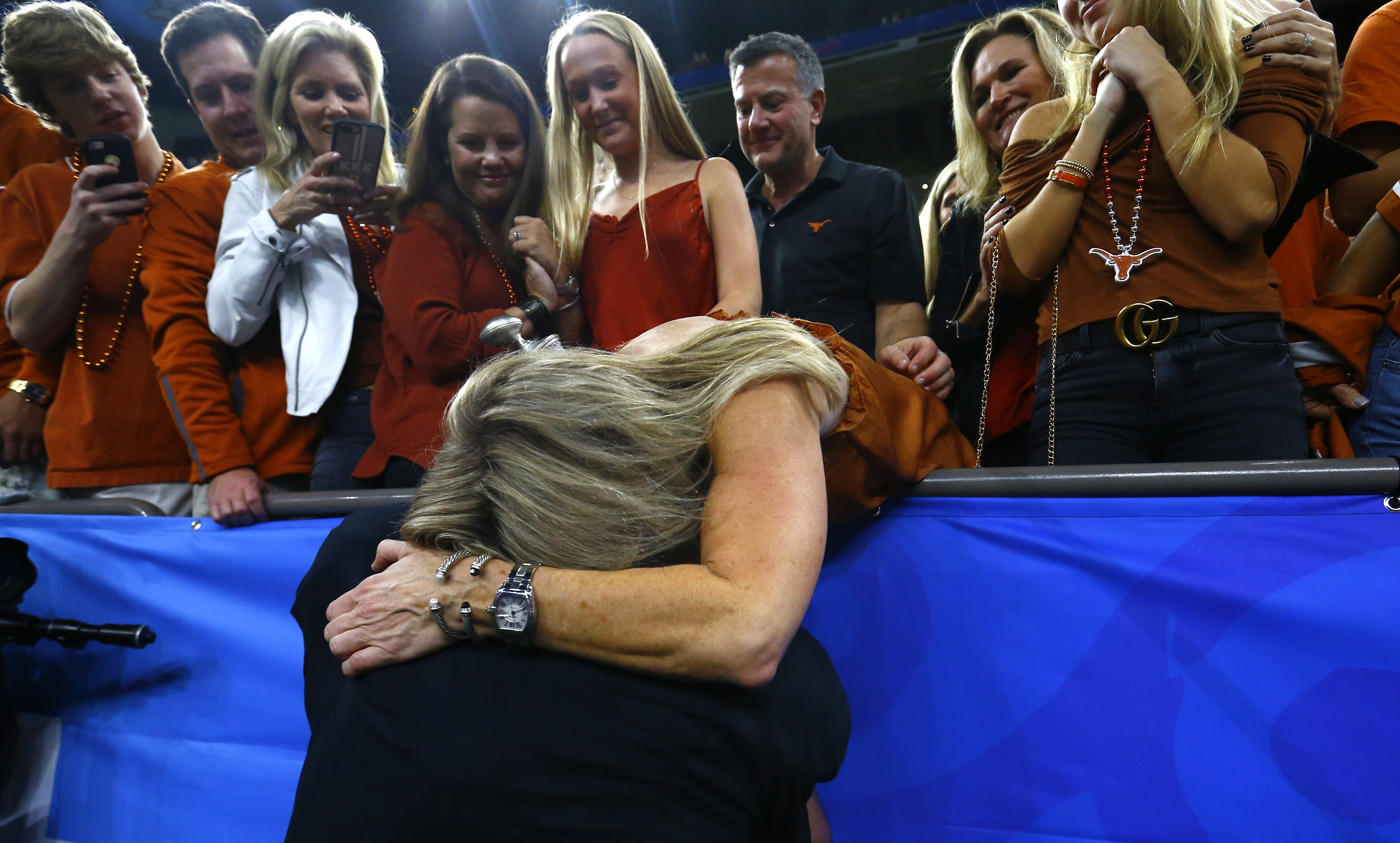 By now, Longhorn fans have seen video clips or photographs of Sam Ehlinger paying homage to Drew Brees by donning his throwback Westlake jersey at the Sugar Bowl on New Year’s Day.

What some may not know is that the idea didn’t come from Ehlinger himself, and the jersey wasn’t found at an Austin-area merchandise shop. Instead, the show of respect came about thanks to an alert teammate from Homestead, Florida.

Senior cornerback Davante Davis was walking near Canal Street prior to the game when he spotted the jersey at a retail shop. After a quick text message to an excited Ehlinger, Davis purchased the item, brought it to Ehlinger and the quarterback reimbursed the $90 price tag.

Ehlinger wore the jersey during a pregame walk into the stadium, and the former Chaparral put in on once again after Texas had completed a 28-21 upset of the highly-touted Georgia Bulldogs. Not even head coach Tom Herman’s strict dress code policy could stop Ehlinger from honoring the NFL’s all-time passing leader.

“Coming into the Superdome, I had to respect Drew because of all the amazing things he’s done in this building,” Ehlinger said. “I honestly wanted to play like him and have a little magic. That was just paying my respect to him.”

Brees was sent a picture of Ehlinger’s tribute and posted his support on Twitter. He said that he was able to catch most of the second half of the Sugar Bowl and gave his Westlake predecessor credit for guiding the Longhorns’ offense.

“He played big, his team played great, but he was obviously the leader and the catalyst for the team,” Brees said. “I’m happy for his success and he’s a great kid.”

Brees, of course, led Westlake to the 1996 UIL Class 5A state championship before departing for Purdue. Ehlinger left Westlake two decades later and finished his prep career as the program’s all-time leader in passing yards and touchdowns.

Brees said he’s known Ehlinger for years and marveled at how the signal caller has handled the spotlight of being the Longhorns’ starter.

“I feel like I’ve seen him grow up a little bit, just knowing him since middle school and high school and some of his goals and aspirations,” Brees said. “I think he’s always envisioned himself being in that position, playing for the University of Texas — the hometown team — and leading them at quarterback. He’s done a phenomenal job of that in his first two years. He’s still young. His future is very bright.”

That opinion is shared by many that watched Ehlinger earn the Sugar Bowl’s Most Outstanding Player award after becoming the first Texas quarterback since Vince Young to rush for three touchdowns in a bowl game.

But even after witnessing Ehlinger rise to national prominence in his own backyard, Brees still seemed more surprised that the sophomore could actually find one of his No. 15 Chaps jerseys.

“Did he have to get that specially made or put a call in to the coach or AD and borrow it?” Brees asked reporters in a press conference the day after the Sugar Bowl. “I don’t know. It was cool.”

Westlake High School has since remedied the problem of a potential lack of inventory. It announced on Jan. 9 that the team store inside Chaparral Stadium has ordered throwback Brees jerseys to sell, as well as versions with Ehlinger’s No. 4 and Nick Foles’ No. 7.

Perhaps Davis should ask for a portion of the proceeds.