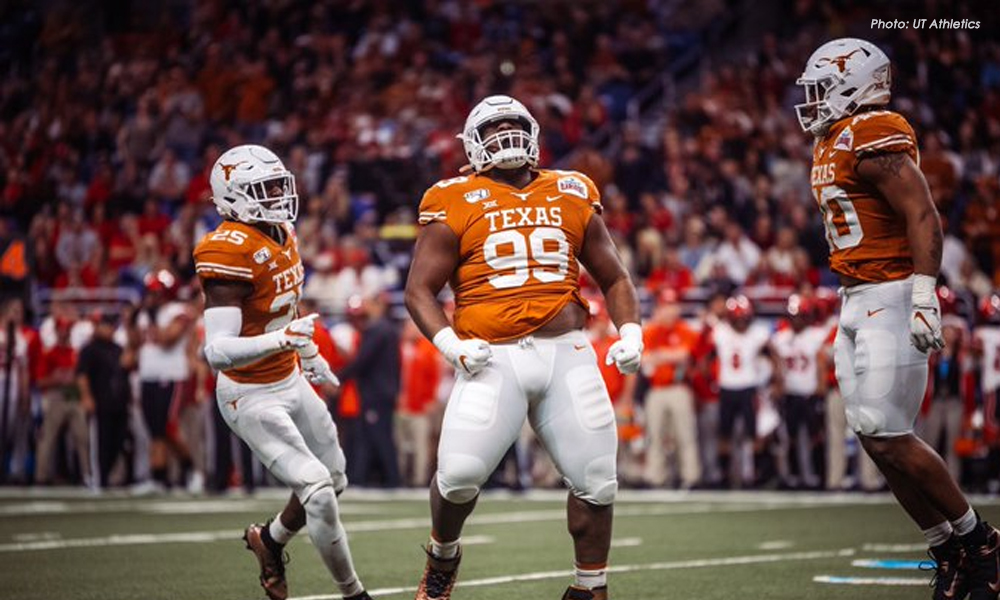 SAN ANTONIO — The Longhorns’ 38-10 demolition of 11th-ranked Utah in the Alamo Bowl provided yet another sugary sweet catapult into the off-season despite a topsy-turvy season overall.

Texas (8-5) was enigmatic at times during 2019, as the secondary and offensive line took turns regressing during Big 12 play. But on New Year’s Eve in the Alamo City, everything came together.

Sam Ehlinger was his old efficient self, as the junior quarterback completed 12 of 18 throws for 201 yards and three touchdowns. He also used his imposing size to add 73 yards and a score on the ground.

Meanwhile, junior linebacker Joseph Ossai spent all game looking like a heat-seeking missile. Ossai finished with eight total tackles — including six for loss and three sacks — as Texas held the Utes (11-3) to their lowest scoring output since the 2018 Pac-12 championship game against Washington.

Not surprisingly, Ehlinger and Ossai were rewarded by being named the Alamo Bowl’s Offensive and Defensive MVPs.

“Our talent can take us pretty far,” Ehlinger said. “When you add mistake-free football, watch out.”

The Longhorns began the game with a 29-yard field goal by Cameron Dicker on the opening drive. Ehlinger avoided potential disaster when a Utah defensive back dropped a possible pick-6, and the former Lake Travis kicker converted the march into points.

From there, it was pretty much smooth sailing for the boys in burnt orange.

Texas’ defense smothered Utes quarterback Tyler Huntley early and often, as Utah managed just 60 total yards in the opening quarter. Even special teams made an impact, as D’Shawn Jamison broke loose for a 71-yard punt return in the second quarter to set up the game’s first TD — a 5-yard throw from Ehlinger to senior Collin Johnson.

The Longhorns emerged from the halftime locker room up 10-0 and tacked on another 6 points when Ehlinger hit Keontay Ingram on a wheel route that went for an 11-yard score.

Utah booted a short field goal to pull within 17-3, but Texas went back to work on offense and crossed the goal line again on a 6-yard run up the gut from Ehlinger.

Despite a few questionable calls, the fourth quarter turned into a glorified curtain call for the Longhorns’ seniors as the lead ballooned to 28 points. Devin Duvernay snagged a 16-yard throw from Ehlinger, and Ingram later rumbled 49 yards to the end zone to cap the game’s scoring.

The Texas defense forced seven punts on the night and dominated even though it didn’t force a single turnover.

It was a fond farewell for linebacker Malcolm Roach and fellow seniors Johnson, Duvernay and Zach Shackelford. All four have a legitimate shot to be playing on Sundays next season.

The Alamo Bowl rout also helped head coach Tom Herman improve to 4-0 in bowl games with the Longhorns.“We knew that we were going to have to play with a greater passion and physicality than they would,” Herman said. “It would have been easy for guys to splinter after the regular season was not what we had hoped. These guys are competitors. They want to win.”