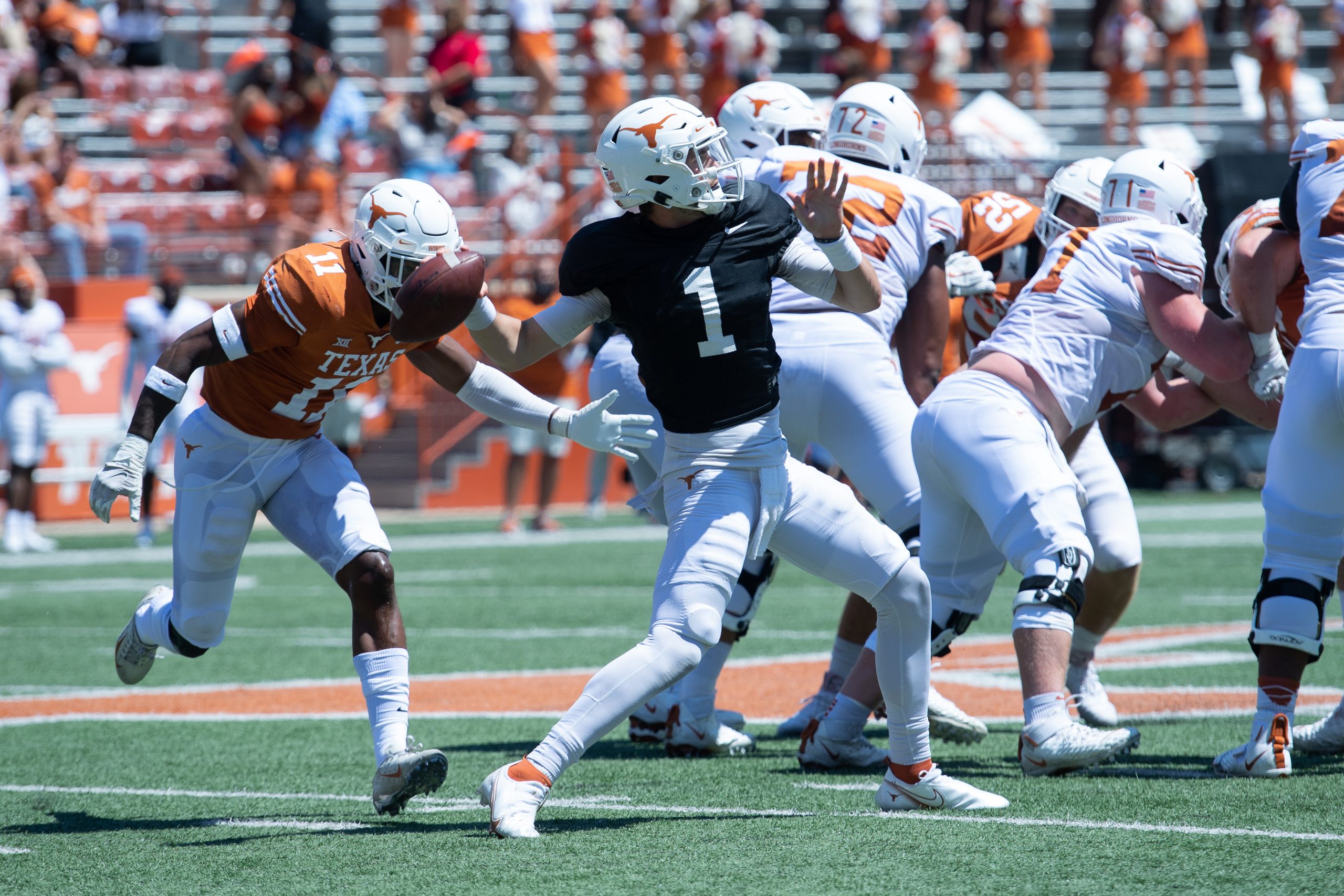 Is it Casey Thompson’s time, or will hometown product Hudson Card be the first signal caller to throw a pass during the Steve Sarkisian era?

That question has been on the forefront of Longhorns fans’ minds ever since Sark arrived on the 40 Acres to take over a program that has once again fallen stale — this time under the watch of purported savior Tom Herman.

Thompson, a 6-1, 195-pound redshirt junior from Oklahoma City, appears to have the inside track due to his maturity level and eye-popping performance in the 2021 Alamo Bowl. After Sam Ehlinger was forced to leave the game with a shoulder injury, Thompson stole the spotlight and went 8 of 10 passing for 170 yards and four touchdowns as Texas romped to a 55-23 win over former Big 12 foe Colorado.

A strong case for Card can be presented as well, though. The 6-2, 195-pound redshirt freshman from Lake Travis was a high school All-American that has the accuracy and timing necessary to bring the Longhorns’ passing game to life and convert key third downs.

During the annual Orange-White spring game, it was Thompson that got reps with Texas’ first-string skill players, but Card had arguably the better showing, which provided even more mystery to the position battle as the season draws closer.

Don’t expect Sark and his staff to rush to a decision. The competition will likely fuel both players and will also give the Longhorns a backup who’s instantly capable of stepping in should injury or ineffectiveness force a QB switch.

“I think we’ve got two frontline guys to start the process,” Sarkisian said of Thompson and Card. “I do like the maturity of [Thompson]. I like what he brought in the bowl game — you got a pretty good feel. We’ve obviously dug into a lot of practice tape. I like the skill set of Hudson Card. I think he’s a really talented player, and you see that when you dig into the tape.”

Thompson and Card each have solid mobility, but Thompson looks to be the more durable ballcarrier if he chooses to pull the pigskin down and take off downfield. That could provide an edge for Thompson as the Longhorns’ passing game rebuilds around wide receivers Josh Moore, Jordan Whittington and Troy Omiere and tight ends Cade Brewer and Jared Wiley.

A dual-threat player under center would also draw more eyes from opposing defenders and potentially make sophomore running back Bijan Robinson even more dangerous out of the backfield.

Both QBs will look to transition to Sarkisian’s run-pass option style attack that prioritizes quick hands and accuracy. The intangibles — like competitive drive and leadership — will also be tested as the Longhorns search for their new field general prior to Sept. 4’s season opener at DKR against Louisiana-Lafayette.

But even when a decision is made on who will be taking the first snaps of 2021, different questions will just replace the old ones — how much confidence does Sarkisian’s staff have in its starter, and if things go awry, how soon would a potential change be made?

In reality, the battle between Thompson and Card was decided after the Arkansas loss amd the winner of the job enjoying success is Casey Thompson. The eyes of Texas will be upon both players even though CT looks to remain a starter moving in this weeks home game versus Tech. Coach Sark hopes that the two QBs can prove both are the right one to help bring the Longhorns back to national prominence.