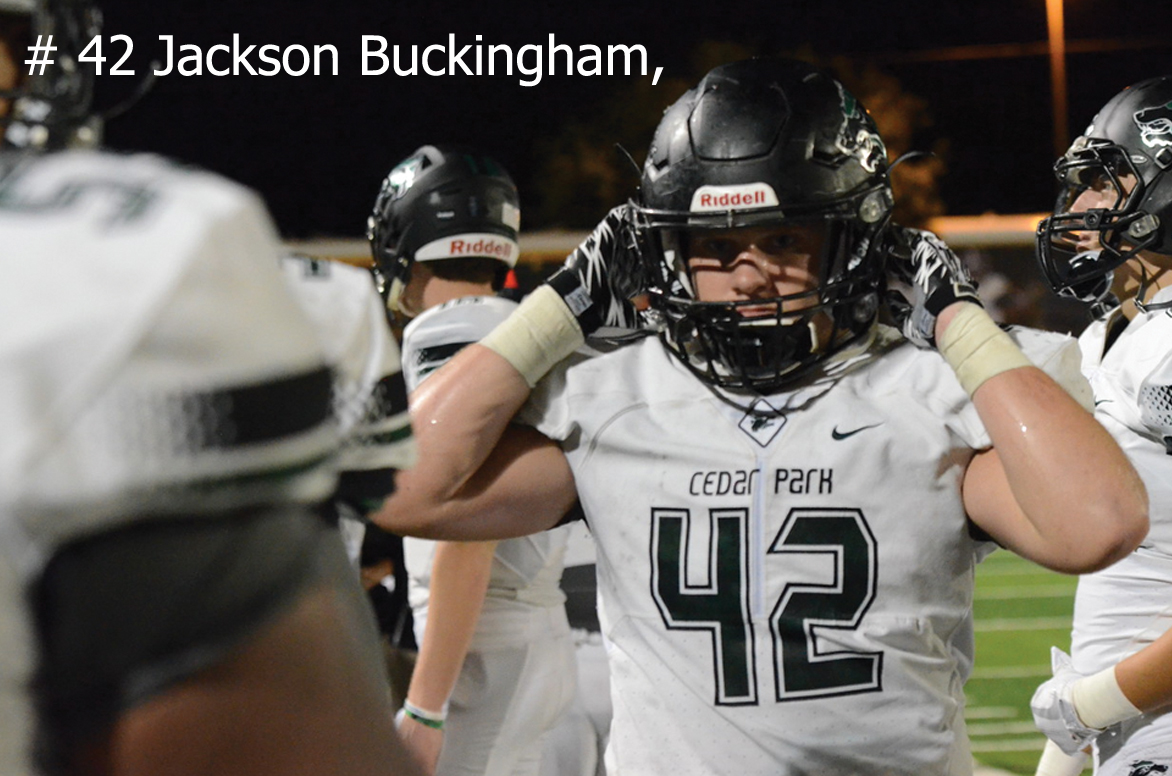 Many thought Cedar Park’s hopes for a district title were dashed when senior quarterback Mak Sexton broke his femur early in the first quarter against Georgetown. The Timberwolves had lost another team captain in safety Gunnar Chriswisser a few minutes before, and with two of its leaders getting worked on in the training room, fell behind 27-7 by halftime.

But Cedar Park has one of those strong football cultures coaches are always talking about. The kind of culture where its next man up, nobody feels sorry for themselves and everyone plays for each other. So instead of packing it in, the Timberwolves came roaring back for a 28-27 win. Two weeks later, with both Sexton and Chriswisser still out, they beat undefeated Hutto 35-25 to clinch a sixth straight district championship.

“I think (the culture is) instrumental in our success,” said Cedar Park coach Carl Abseck. “Our kids really don’t care who gets the credit, who gets catches, the carries, the tackles, the sacks. They just want to do what they can do to help the team be successful.

“There’s a lot of tradition to uphold and I don’t think they want to be apart of the group that lets that tradition down. We talk to them all the time about the next man up mentality and practice and prepare like you’re a starter because you never know when you might be so I think they take those lessons to heart.”

Sexton’s injury allowed quarterback Ryan Fiala to get some valuable experience as he enters his senior year. The 6-foot-4 righty completed 55.7 percent of his passes for 1,264 yards (5.5 yards per attempts) with 17 touchdowns and seven interceptions. With a full offseason to prepare for his role as QB1, Fiala could be primed for a big year.

“There’s no substitute for playing on a Friday night at the highest level and he got a big piece of that last year,” Abseck said. “He was able to come in and do a great job for his team. The experience that he got was huge and it’s going to pay big dividends for him and for us this year so we’re excited about that.”

Cedar Park’s offense was heavy on the ground game when it won its first state title in 2012 but began shifting to more of an aerial attack when Sexton became starter in 2015. Abseck likes his quarterback and skill guys enough that there will be no turning back in 2018. With a pair of burners on the outside in receivers Brandon Breed and Carson Neel, a great pass catching back in Will Lipscomb, converted-linebacker Logan Mayou playing tight end and rising 6-foo-4 junior wideout Will Udoye coming off a strong season on JV, Abseck sees mismatches all over the field.

“We’re gonna pretty much stay who we are,” Abseck said. “Every year for the last three years, we pretty much upped the ante on the passing yards. I think we want to be a little bit more balanced this year, but we still want to play peddle to the metal and we’re going to throw it around because it really fits the personnel that we have.”

Cedar Park must replace a majority of its defense, including eight of nine varsity linebackers. That unit anchored the vaunted “Black Rain” defense last year with District Defensive MVP Keegan Nichols and All-District first-teamer Jackson Buckingham combining for more than 220 tackles as seniors.

“It’s going to be difficult to replace those guys,” Abseck said. “They were great players for us and exceptionally hard workers, and so that’s not an easy replacement. But that’s been the hallmark of our program, is that the kids coming up from behind on the sub-varsity levels, they’ve been preparing for those moments.”

While the new linebackers get up to speed, the Timberwolves will lean on a defensive line that brings back senior Jesiah Whittington, junior Ben Bell and senior Jacob Munoz. Whittington is a returning first team all-district defensive end who racked up 27 tackles, five sacks and eight tackles for a loss last year. Bell is a returning all-district second team interior lineman who Abseck said “exploded” during the offseason. He’s now 6-foot-2, 240 pounds and recently set the school power clean record. Munoz is undersized but possesses an incredible motor, and they’ll occasionally be joined by senior B. J. Jones, who is moving to offensive line after making first-team all-district on defense last year but will go back to his old spot in certain situations.

Abseck loaded the non-district schedule with four 6A opponents (Vandegrift, Cedar Ridge, San Angelo Central, Katy Cinco Ranch) who went a combined 39-10 last year, and an already tough district that included Hutto and Georgetown will get tougher with the additions of 6A drop-downs Manor and Pflugerville. But when you have a culture like Cedar Park, a tough schedule isn’t a hindrance. Those are just more chances to get better and prepare for what they hope to be a long playoff run.