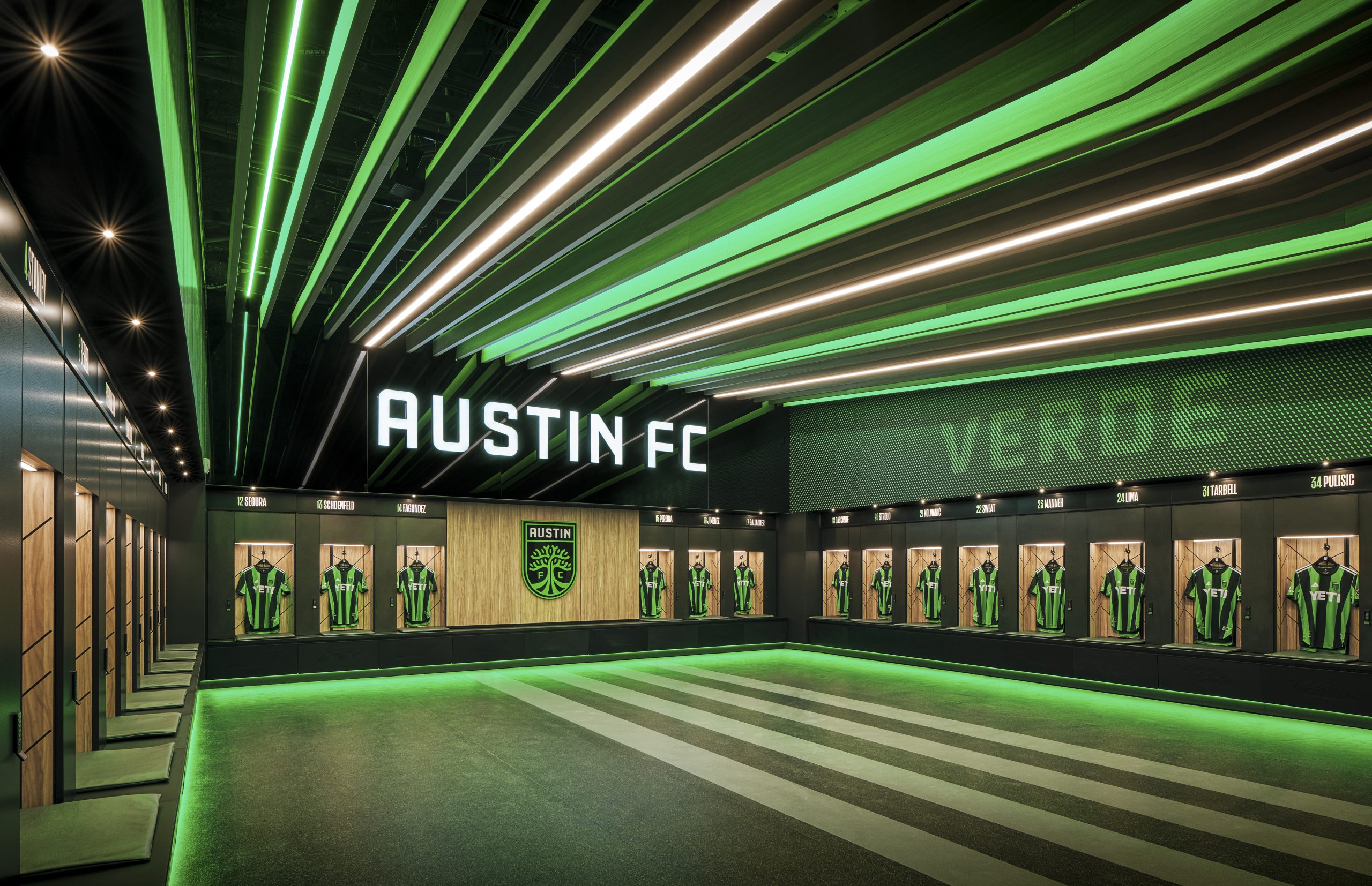 Austin, Texas — Henderson Engineers, a national building systems design firm, celebrates the one-year anniversary of the June opening of Q2 Stadium, the first ever major league sports venue in Austin, Texas. The Kansas City-based company, which has offices in nearby Dallas and Houston, served as the lead engineer for the $260 million facility that is home to the Austin FC Major League Soccer (MLS) team. In providing architectural lighting, electrical, fire and life safety, mechanical, plumbing, security, and telecom design services, Henderson was keen on elevating the fan experience.

Most striking of all Henderson-designed features are the lighting systems, which enabled Q2 to be the first ever stadium worldwide to be constructed with tunable RGB LED lights from the ground up. As a result, all 402 light fixtures throughout the facility have color changing and color tuning capabilities. The stadium’s operations team can instantaneously shift the lights from white to more than 16 million unique colors, allowing them to illuminate the pitch, the stands, and even attendees in numerous hues and patterns.

“Most stadiums use fireworks to boost excitement, so it’s an amazing experience to watch everything around you change color to red, white, and blue during the national anthem, to rainbow when commemorating PRIDE Month, and so on,” explained Mischa Haramia, Henderson’s entertainment practice director who project managed the firm’s work on Q2. “Austin FC fans are ravenous, and the full-color-tunable lights are a great complement to the passion they show for their team at every game. The operations team also really loves the experience it provides, so much so that they host tours for the general public and other major league sports teams to specifically showcase the lighting.”

Adding to Q2’s stimulating atmosphere are several landscaped green spaces surrounding the stadium that serve as outdoor recreation areas on game days and public parks year-round. This includes a terraced 2,500 capacity amphitheater that doubles as a concert venue. To sustainably irrigate the greenery, excess rainwater is diverted from the soccer pitch via piping and pumping systems that were powered by Henderson and stored in nearby ponds, the stormwater catch basins designed by GarzaEMC, the civil engineer on the project. Henderson helped implement a HVAC condensate capture system that stores condensation in a holding tank and pumps it out to irrigate the landscaping as needed. Furthermore, the stadium’s electrical, mechanical, and plumbing systems are fully equipped to allow the facility to install a SubAir System for the pitch if desired in the future to supply fresh air into the root zone to help maintain healthy turfgrass.

“In a relatively dry state like Texas, it’s important to make sure we’re using our natural resources responsibly,” noted Haramia. “We’re proud to have helped provide fans, families, and the surrounding community with beautiful green outdoor spaces that they can enjoy throughout the year while still limiting water usage. The amphitheater is an especially great addition in a city where live music is a beloved part of the local culture. And because we’re diverting rainwater, the City of Austin’s sewer systems are less strained whenever there’s unusually high rainfall or wastewater.”

For a seamless technological experience for fans and the operation team, Henderson provided a public distributed antenna system (DAS) and WiFi throughout the 465,000 square foot venue to boost connectivity and power key stadium technology features including a large LED videoboard. Given the rapidly evolving technological landscape, the systems are designed to be readily adaptable to future innovations.

“Social media, video, and other communication tools are an integral part of the modern sports experience, and we made sure fans are able to engage with the game and each other from virtually every location at the stadium,” said Haramia. “Our venue experts work on projects for every major sports league, giving us firsthand experience on how fast technology is changing and the steps we can take to keep up. So, we consciously provided Q2 with the flexibility to upgrade its WiFi systems, cellular network, and DAS without needing major infrastructure upgrades. That helps ensure the venue can remain at the forefront of tech for years to come.”

The Q2 Stadium project team included Gensler as the lead architect, Walter P Moore as the structural engineer, and Austin Commercial as the general contractor. The facility is LEED Gold certified by the U.S. Green Building Council owing to the sustainability efforts undertaken during design and construction.

Henderson Companies, Inc. is the 100% employee-owned parent company of Henderson Engineers and Henderson Building Solutions. Henderson Engineers is a national building systems design firm with a wide array of engineering design services and a project portfolio representing a wide range of markets including business, community, retail, healthcare, and venue. Henderson Building Solutions is a construction management and commissioning services firm that provides a seamless bridge between design, construction, and ongoing maintenance. As Henderson, we combine engineering knowledge with in-the-field construction expertise to provide single-source design-build solutions for any project.

Founded in 1970 and 2013 respectively, we’re licensed in all 50 states (plus the District of Columbia, Puerto Rico, the U.S. Virgin Islands, and British Columbia) and bring buildings to life through our 1,000 employees and 250+ PEs across 12 offices, including New York, Philadelphia, Tampa, Nashville, Bentonville, Dallas, Houston, Kansas City (Lenexa, Kansas, and downtown Kansas City, Missouri), Phoenix, Las Vegas, and Los Angeles. Our vision is to be the firm that builds a better world. We’ve diligently cultivated an inclusive, best-in-class work environment where people can reach their full potential. Our core values drive us to deliver unrivaled service and solutions that make us the team you want to partner with.

The Brotherhood of Austin FC
2022 Legitimate for Austin FC