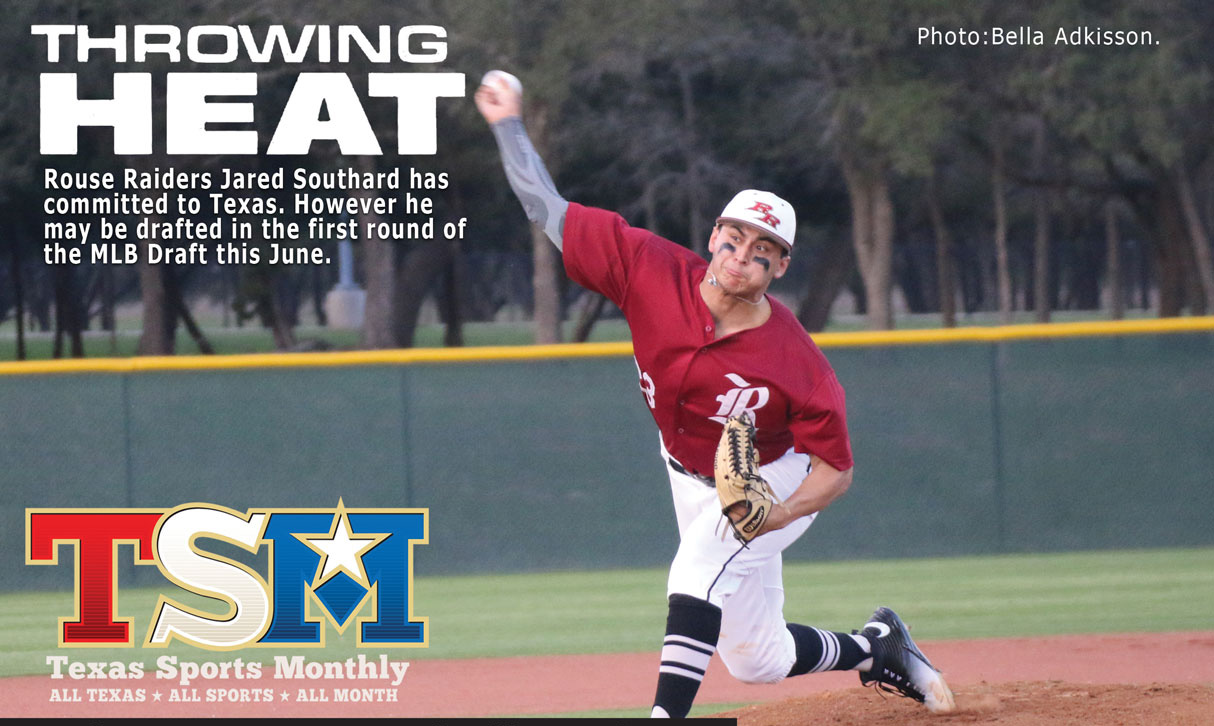 Jared Southard has been making most opposing high school batters look foolish for the past few years. It’s almost been like a Division I pitcher throwing to a high school’s junior varsity team. The stocky, six-foot-two-inch, 200-plus-pound pitcher, a senior at Rouse High School in Leander, has been surely dominating this season. He’s given up fewer than 10 hits, and just one earned run, in 40-something innings, and at the end of the regular season was nearing 100 strikeouts. He’s thrown several one-hitters and even one or two no-hitters this season.

Southard committed to play baseball at UT in the fall of 2016 when he had just turned 16 years old his sophomore year. Even then he was throwing in the upper 80s. Now, he throws a fastball that consistently hits 91-93 MPH, often topping out at 96. This fact, coupled with command and his sharp, hard-breaking curveball that routinely hits 77-80 MPH, makes Southard virtually unhittable at the high school level. When Southard signed with UT in 2016, he was ranked as the 135th overall player in the country in the graduating class of 2019, was considered the 15th best player in the state of Texas, and was ranked third for all right-handed pitchers in the state for the 2019 class. In 2016, following his sophomore year, he was named an Honorable Mention Underclass All-American. Now the young fireballer will surely get drafted this June, which could lead to him signing a contract to play professional baseball.

Southard didn’t start pitching seriously until the summer before his sophomore season; before that he’d been a catcher. And then really things took off for him: He was named to 17-5A’s All-District team after his sophomore and junior seasons. He has played club and travel baseball with the Houston Banditos, and even represented Texas at the States Play Tournament hosted by the Texas Rangers. University of Texas head coach David Pierce, speaking to the Longhorns’ official website, said he thinks of Southard as a “power right-hander.” He said the young pitcher “looks the part, and his arm is explosive. He continues to work hard to be the best he can be. Jared’s ceiling is tremendously high, and he has a chance to reach it because he is a grinder.”

“[Jared] has been really good,” Rouse head coach Chad Krempin said. “He is undefeated on the season, and he hasn’t given up an earned run on the season. He’s given up six hits, I believe, in 40-something innings.” Coach Krempin admitted that the Rouse coaching staff decided early on to limit Southard’s time on the mound. That way, he wouldn’t be overthrown, which could lead to injuries and an inability to use him down the road in the playoffs.

But since throwing Southard more frequently late in the regular season, coach Krempin said Southard has “been phenomenal; he’s thrown several one-hitters and one or two no-hitters. And just one run, unearned, has been scored against him. … I think he’s going to get drafted pretty high. There’s a chance that he could sign if he’s drafted high enough.” In other words, if Southard gets drafted high enough in the Major League Baseball June draft, whether in the first, second or third rounds, the money that is likely to come from a signing bonus (perhaps well into the seven figures) would certainly influence Southard’s decision to choose a career in professional baseball over playing at UT.