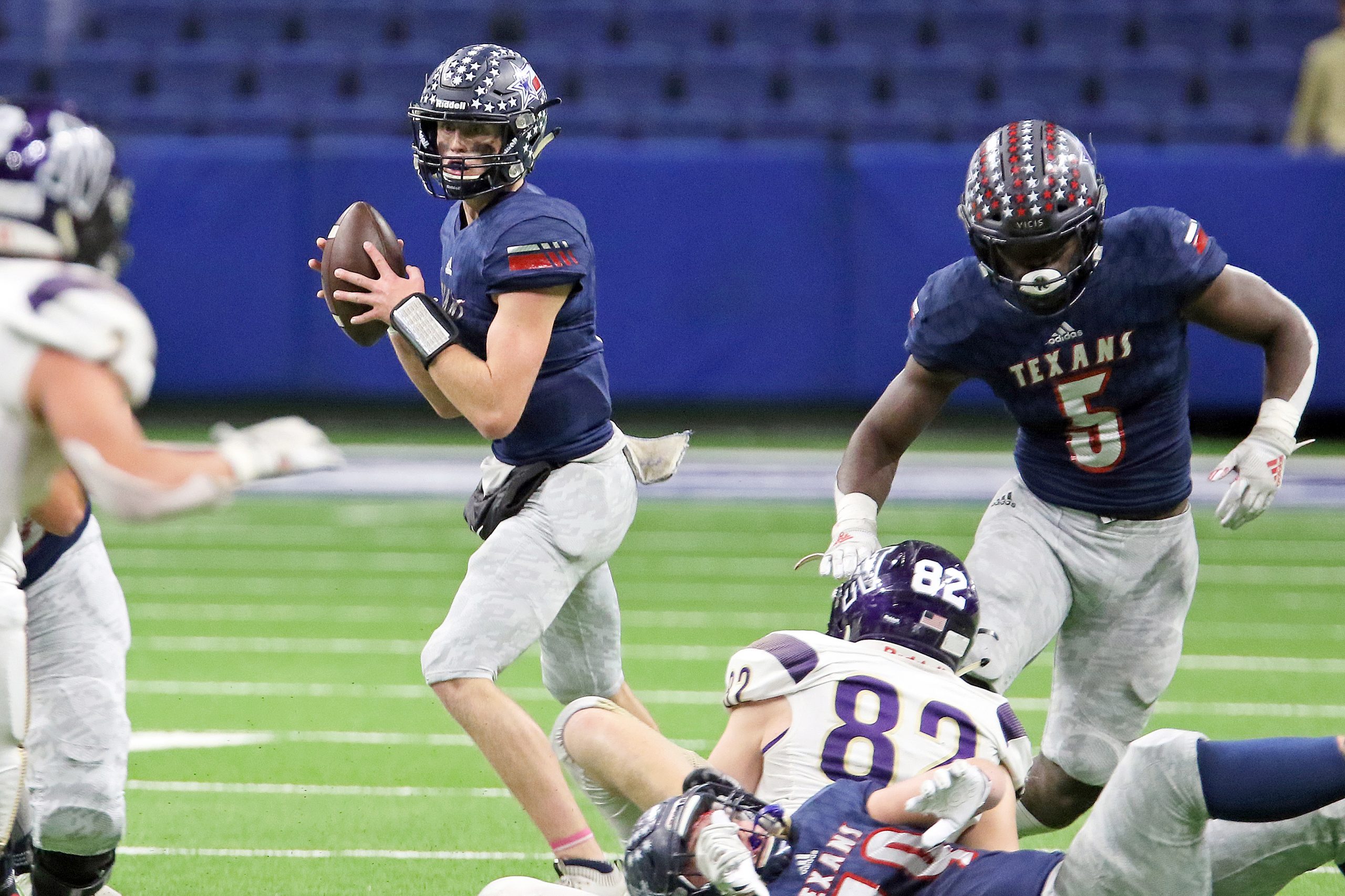 Not many folks outside the halls of Wimberley High School thought the Texans would end up playing for a Class 4A Division II championship this season.

But senior quarterback Cooper McCollum has been confident in his team’s ability all season. In fact, the signal caller has been planning on a special 2019 campaign since before Wimberley sewed up a spot in the playoffs.

“We actually had to turn in goals for our team — we had to turn in three goals — and one of mine was to be the leader of a team that’s remembered,” McCollum said in mid-October. “We don’t want to be a team people forget. We want to get our name written in stone up on the state champs wall so when they walk in, they see our name first and they know we mean business.”

McCollum has since raised his game to a new level while helping the Texans’ offense become even more unstoppable. The 6-foot-3, 195-pound senior came into the state title game having already accounted for over 4,000 yards of total offense and 61 touchdowns.

They key for McCollum and the Texans has been balance. Not only can McCollum torch an opposing defense with his arm, but he’s shown the ability to keep plays alive with his feet until his wide receivers gain separation down the field.

McCollum has plenty of weaponry at his disposal, as Wimberley’s receiving corps is made up of seven players who have collected 10 or more receptions. The leader of the pack is junior Christian Marshall, who has used his 6-foot-3 frame to haul in 61 passes for 1,282 yards and 18 TDs prior to the state championship matchup against Pleasant Grove.

Wimberley also has a solid running back in Moses Wray, who excels at getting the tough yards that help set up the Texans’ play-action passing game. Wray’s 1,223 yards and 15 scores force defenses to stay honest when attempting to game plan for Wimberley.

Of course, it hasn’t been smooth sailing the whole way for McCollum and the Texans. The quarterback was forced to leave Wimberley’s 42-14 loss to Navarro with an injury that he sustained with his team holding a two-touchdown lead.

However, that type of adversity has only led to bigger and better performances down the line. Since the postseason began, McCollum has thrown for 1,320 yards and 19 TDs, including five each in back-to-back weeks against Navarro and Silsbee.

The Texans punished Navarro 42-12 in their playoff rematch, and it looked as though McCollum was going to lead another rout in the state semifinals against Silsbee. As it turned out, Wimberley needed all five of his scores versus the Tigers, as Silsbee made a late comeback to pull within six in the fourth quarter.

The Texans once held a 49-16 lead in that game, but McCollum never showed any panic. Instead, he did what he does best — get the ball in the hands of his playmakers on the outside as Wimberley prevailed 56-43 to punch its ticket back to state for the first time since 2011.

“I wasn’t scared,” McCollum said. “I know who we are, and I knew we’d execute when it mattered the most.”