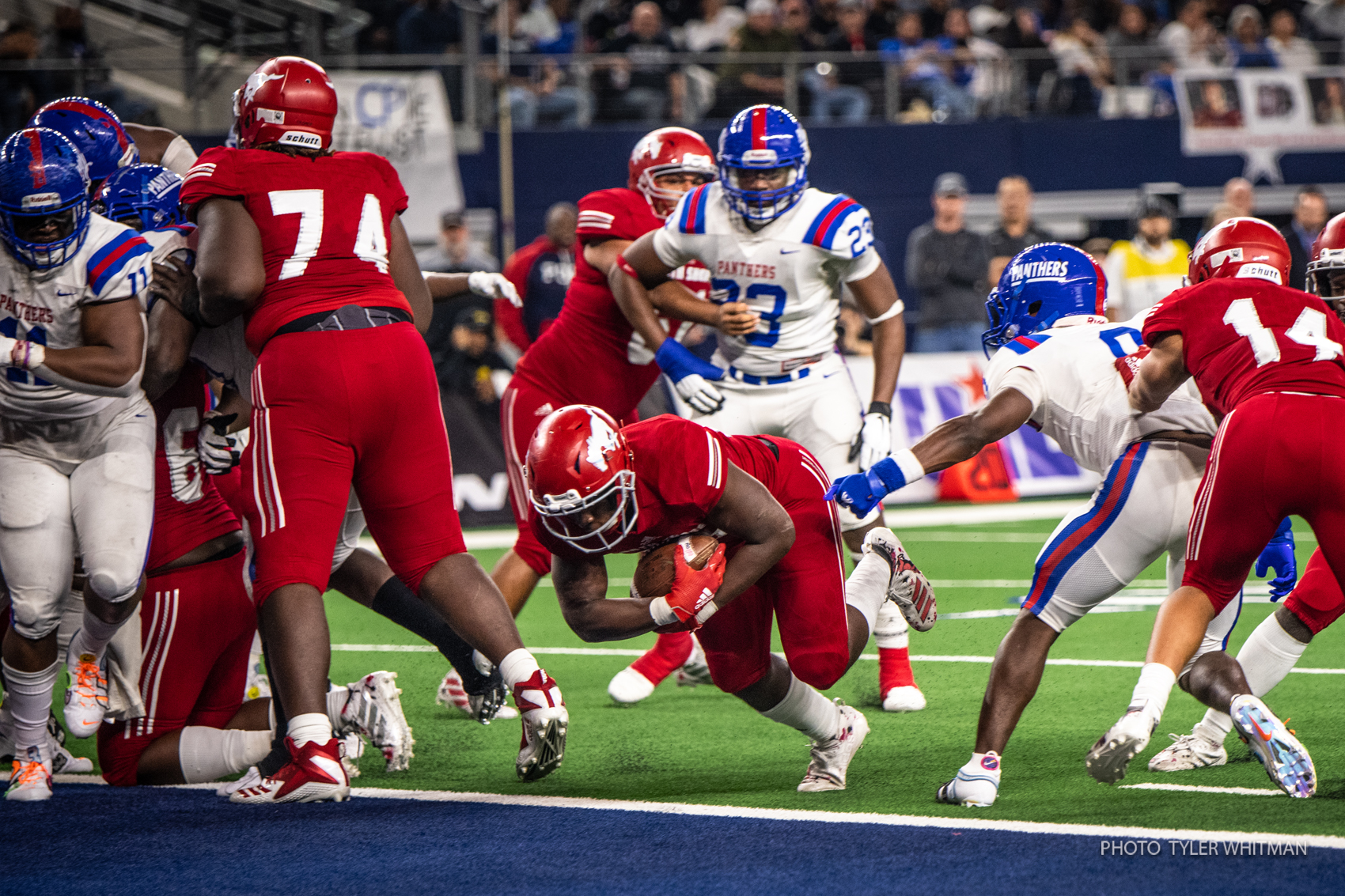 A rematch. A battle. A fight. This is the 2019 Texas UIL Football State Championships at AT&T stadium in Arlington. Two teams would face off in front of 47,818 fans, winner take all including the title best 6A DI football team in Texas, the pressure was on. The North Shore Mustangs took on the Duncanville Panthers in a match up to remember. This time just a year ago these teams went head-to-head in the state championship with North Shore throwing a Hail Mary in the final seconds to win the game. If there were any doubts of who the dominant team is, North Shore erased them when they won 31-17 over the Panthers.

Up to this point, both teams had taken on tough advisories with Duncanville stampeding through Southlake Carrol and Rock Wall while North Shore sailed past Lake Travis and Katy. Combined the teams had a point differential of 1054 points.

Duncanville received to start the game, as a redshirt freshman quarterback Chris Parson would lead the Panthers out in his first-ever start, filling in for the injured Ja’quinden Jackson who was out with a torn ACL. The Panthers immediately asserted the running game as junior running back Rodrick Daniels cut up the defense for a 16-yard gain. The freshman quarterback would not keep up as Parson’s next two passes were incomplete forcing a Panthers punt.

The Panthers made a field goal in the dying seconds of the first half tying the game up 17-17. Both teams needed to step it up in the passing game. To this point North Shore only had 27 passing yards and if you took the giant 62-yard pass away from Duncaville they had 29 passing yards. Yes running wins games but you need to be able to pick up the 3rd and longs.

Coming out of halftime it was anybody’s game, both teams still fighting for the crown of best team in Texas and both doing it without their biggest offensive play makers. The Panthers would fold under the pressure straight out of the gate as their punter fumbled the snap, than recovered it and fumbled again. North Shore recovered at Duncanville’s 20-yard line.

After Mustang reciter Syncere Green made 14-yard on a catch Rodger Hagan would capitalize with a 1-yard running touchdown. Roger Hagan took it upon himself to pick up the slack with Zachary Evans out, through the first three quarters Hagan had 87-yards rushing and two touchdowns.

Duncanville followed with yet another slip up as freshman quarterback Chris Parson tried to fight for more yardage but ended up putting the ball on the turf. Luckily for them North Shore was unable to do anything with the ball just giving it right back. The Panthers would come so close once again but every time they would fall just short. A pivotal moment on 4th&1 the Panthers were stuffed on the goaline turning the ball over to the Mustangs.

North Shore knowing it would be a slug-out did the same thing asserting their ground game with four straight runs amassing a total of 27-yards. Dual threat quarterback Demetrius Davis would than scramble out of the backfield following his blockers and using pure athleticism to earn him a 30-yard touchdown run.

“We’ve been running the ball the last couple weeks really well, so that was the game plan – to make sure we came out and got the run game going”, said North Shore offensive coordinator Willie Gaston.

Duncanville would not change its ways, they were committed to the ground game and it would stay that way. The Panthers would run the ball six times for 28-yards relaxing any nerves the young quarterback had. Parson would than find Rodrick Daniels on a flat route, after an electric juke he burst up field for 11-yards setting up Daniels for his own 25-yard TD run to tie the game up.

If you did not get the sense already you will get it now, this was a ground and pound game. By halftime both teams were over 100-yards rushing while both attempted under 10 passes. North Shore would march down field aided by an offsides penalty on 4th down, they gradually moved downfield thanks to their running game, North Shore would than settle for a field goal.

Duncanville would get the ball and as they had all season they would be electric. Starting with a 23-yard run by Roderick Daniels who was leapfrogging over defenders. Than a spectacular catch by Marquelan Crowell who mossed the defender on a 34-yard gain. The drive would be capped off by a 6-yard quarterback keeper.

North Shore running back Roger Hagan scored on a 2-yard touchdown run. All the while fans were noticing the absence of 5-star running back Zachary Evans who was nowhere to be seen. North Shore head coach Jon Kay would not go in to detail on reports that Evans had been held out due to disciplinary reasons and would not play in the game.

“We talked about in our staff meeting about just kind of some third quarter woes that we’ve had here recently and I think a lot of the fingers get pointed to the defensive side but the reality is we’ve had huge special teams errors that have put us in bad positions we’ve had turnovers on offense that have put us in bad positions so it was a collective discussion about what we can be doing better coming out of the third quarter and you know we met long and hard on that as a staff to try and make some adjustments which you know I give credit to our coaches the fact that, you know, here we are heading into our second state championship game and, they’re still searching for ways to improve and take the next step,” said North Shore head coach John Kay when asked about his goal line stop.

“Again I think that leadership spills over into our kids. Our defense has been much maligned lately, all of a sudden people feel like North Shore forgot how to play defense because we’ve been playing some explosive offenses. In situational football sometimes you step back and allow some things to happen, knowing that you know, what difference does it make if you win by seven or if you win by 57 when you’re talking about the postseason, that’s just the nature of the beast.

“To see those kids come out in the second half, and shut out an offense, like Duncanville. The kid [Ja’quinden Jackson] is phenomenal, they’re dripping with talent and they’re extremely well coached. For these kids to come together and make those adjustments and execute on the largest stage, I think, all the credit goes to them and coaches,” said John Kay.


At this point in the second half both teams were having trouble holding onto the ball as North Shore was once again forced to fumble giving the Panthers yet another chance to intrude on their one score lead. Duncanville had seemingly no offense whatsoever as they were forced to punt again.

This time the Panthers would not be let off the hook as Davis found receiver Charles King wide open in the end zone for a 44-yard touchdown to give the Mustangs a two score lead. The Panthers would try to comeback but all attempts were futile as North Shore’s defense was just too dominant.

The Mustangs claimed a clear victory with a win of 31-17 in a game decided by turnovers. A win that also marked the start of a dynasty. North Shore has won two state championships in a row and will bring star quarterback Demtrius Davis back for his senior year as the Mustangs look to make it a three-peat.