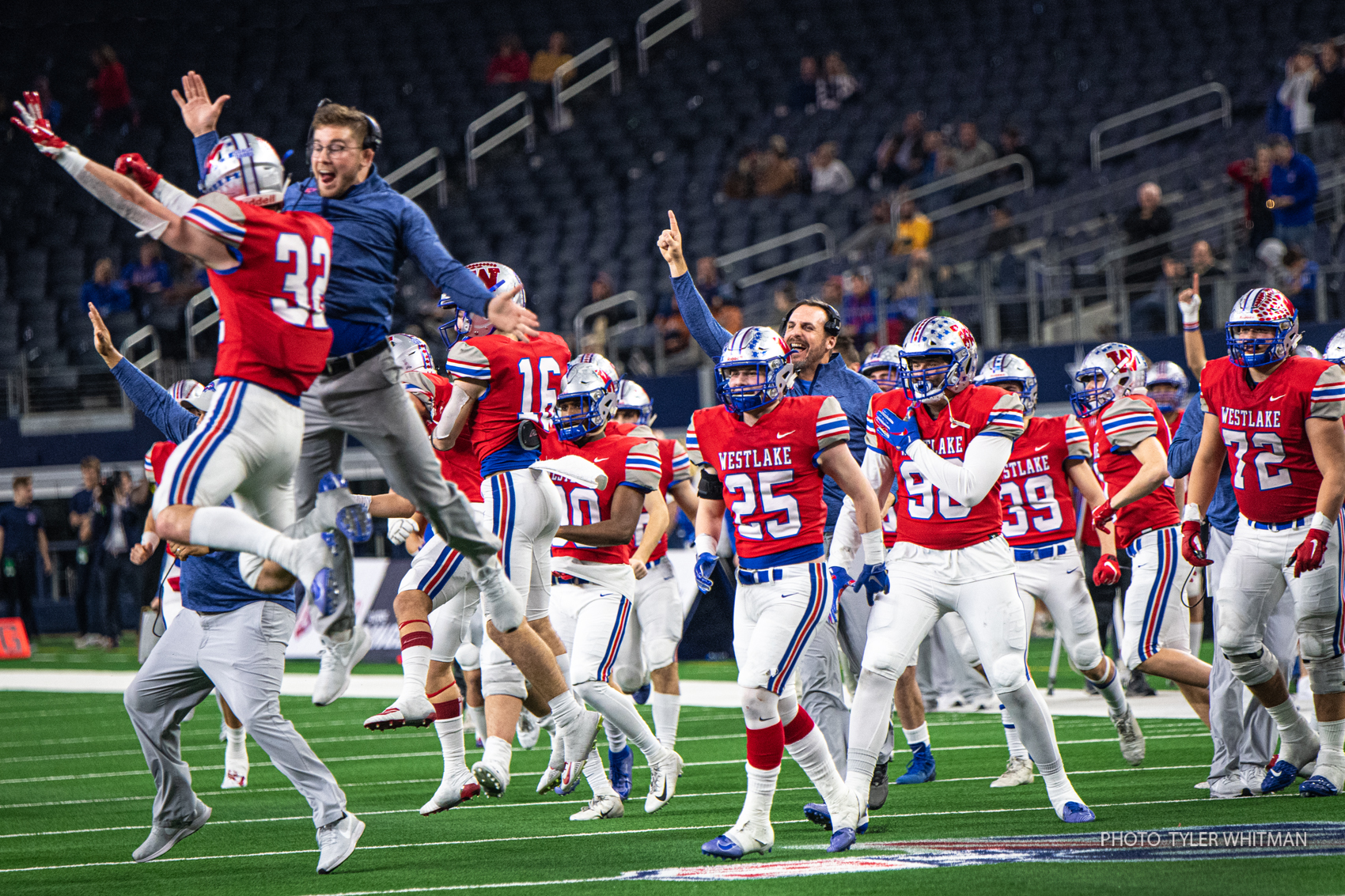 Two teams would enter only one would emerge victorious as the 6A DII Texas UIL Football State Championship was underway with the Westlake Chaparrals taking on the Denton Guyer Wildcats. Both teams had risen to the top of their division due to their physicality and run game and both were prepared to out-muscle and out-work the other. In a surprise upset Westlake shut out Denton Guyer 24-0 in a game with many twists and turns.

Both teams are no strangers to the big lights at AT&T stadium with a combined total of 13 championship appearances including tonight. Guyer won its two titles back-to-back in 2012 and 2013. While Westlake’s victories were much further apart with one in 1996 and the other in 2019. Coincidentally, Denton is 0-2 against the Dodge family (Todd Dodge – Westlake and Riley Dodge – Southlake Carroll) this season and 14-0 against everyone else.

“There’s no doubt that they are ready to play. They’re ready to go after a state championship and we’ve got a tremendous opponent in front of us, but we’re gonna have fun tonight,” said Westlake head coach Todd Dodge of his team.

“On the way here, I wore the Drew Brees jersey that Sam wore in the Sugar Bowl, the Westlake one. I kinda got in my mojo, but it’s awesome. When I was a freshman, I was behind [Ehlinger], and it’s really cool to have him here and have him watch us win state,” said Westlake quarterback Kirkland Michaux.

Westlake received to start the game and as they always did they looked to assert their physical dominance. Starting off with two straight power runs it proved unfruitful as the wildcats matched the Chaps physicality. Westlake than took to the air and exploited a defensive weakness as Westlake quarterback Kirkland Michaux would complete a series of passes, 18-yards, 35-yards, 11-yards, and a 5-yard touchdown pass to Jake Misch who was wide open in the end zone.

Guyer electrified the crowd as their speedy kick returner brought the ball all the way to the house. However a flag was thrown and it was called back due to holding, the fans excitement soared then plummeted. The Wildcats would have to slog it out getting down field as they went through three 4th down conversions. They then suffered a major casualty with the loss of star quarterback Eli Stowers due to injury. Stowers, a four-star recruit committed to Texas A&M is reported to have torn the posterior cruciate ligament (PCL) in his left knee. With Wildcat fans shocked, silent and heartbroken, freshman qb Jackson Arnold bravely took the field. Arnold whose hands were visibly shaking, understandably having been thrown in to the un-fillable shoes of Stowers, attempted his his first throw, which was intercepted by defensive back Michael Taffe in the end zone.

The game from here on out would be a defensive one. Guyer continued that trend forcing Westlake into a three and out. Jackson Arnold would than fumble the snap and get sacked on the ensuing play by Westlake defensive end Austin McClendon once again forcing them to punt.

Denton Guyer got the ball back after a Westlake punt and star running back Kaedrick Cobb went to work weaving and juking his way through defenders for a pickup of 26-yards. Than the pressure came as Westlake defensive back Michael Taff came roaring into the pocket and dropped Arnold for a loss.

Westlake would put together a long drive aided by 4th down conversions and somewhat lucky penalties. The highlight was a 10-yard catch by Ryan Lindley and Kirkland Michaux being sacked in the backfield by Dotun Olanipekun. Then on 4th&18 from the 33-yard line the Chaps went for it, what seemed to be a terrible decision was in motion. Michaux rolled out to his left and fired a missile down field to Mason Magnum for a 33-yard score. The Westlake fans erupted.

Guyer would intercept Michaux’s pass before halftime but nothing would result. Westlake did everything fairly well in the first half, they were lock-down on defense and the passing game was roaring, the number one thing was to get Zane Minors going. For Denton Guyer it was about getting the offense going, especially through the air, they had 15 passing yards through the third quarter and that would simply not due against a strong Westlake defense.

Coach Dodge had this to say going in to halftime,”We’re not running the ball well enough right now. We’re making some explosive plays in the passing game. We got to do a better job of protecting the quarterback, the second half. Got to get a little bit more out of our run game.”

Coming out of halftime Guyer quarterback Jackson Arnold just did not want to be pummeled by players 100 pounds heavier than him. Sadly, his wish did not come true. On the first drive he was sacked twice by Austin McClendon and Will McConnell. The Guyer defense would continue to generate pressure on the quarterback but it was no help as the offense was essentially a stationary turret that was out of bullets and the secondary was a piece of armor that was hit one too many times.

Westlake took advantage of this as Kirkland Michaux found a wide open Jackson Coker down the field for a 39-yard touchdown. Westlake put the game on cruise control only scoring a field goal from there on out, but still managing to stay on top.

Westlake defensive back Henry Smogur would get an interception putting him in company with Michael Taffe (1 int, 1 sack) who won defensive MVP. Michaux completed 20 passes for 285-yards and won the offensive MVP of the championship. His favorite target was Ryan Lindley (7-65) who went out with a hand injury as well as Mason Mangum (3-79-1).

“We have a very physical football team,” said Dodge when asked about the physicality of his players. “We have a bunch of kids that the worst thing that can happen to them is, to come to video on Saturday morning and have their team see them being soft or less than physical or giving less than great effort and that’s such a great peer pressure in our locker room.”

Westlake held their opponents to a scoreless game with a 24-0 victory. Westlake brings the title back home to Westlake/Austin which has not been done since their first state championship trophy in 1996, known as the Drew Brees era. After being eliminated multiple times by North Shore (2019 6A D1 state champion) they finally brought one back, symbolizing a banner year for Todd Dodge where he achieved 200 career wins and a Texas 6A DII State Championship.

“What a tremendous job that they’ve done all year long and I just, I am so happy. I’m so happy about the state championship,”commented Dodge on his team’s victory.

Jackson Coker had this to say about the team’s journey,”It’s unbelievable. This is something you know we’ve been working for, you know some of these guys I’ve been friends with since I was about two years old, and just to come out here and play the way we played is just, I’m at a loss, it’s unbelievable. It means everything, you know, we have a tradition of winning and I’m just glad that we could come out and uphold that to the potential that you know we held ourselves at.”