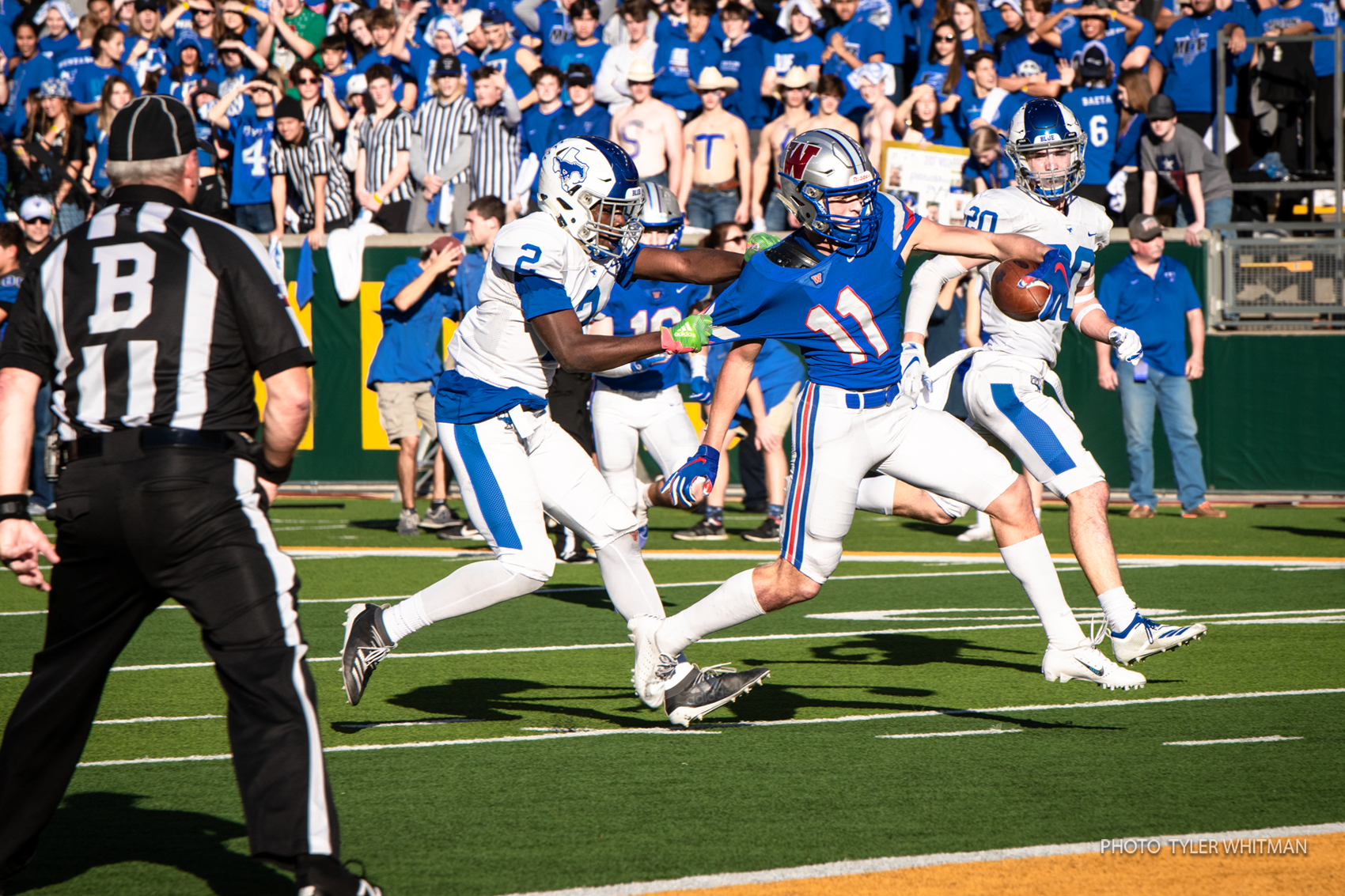 At McLane Stadium in Waco, a Texas high school football 6A Division II semifinal took place between the Westlake Chaparrals and the Katy Taylor Mustangs, both teams fighting to advance to the state championship at AT&T Stadium. The Chaps had made it to the semifinals the previous two years but were unable to tell the tale of anything further. The Mustangs, however, were in their first-ever semifinal game. Westlake swiftly eliminated Katy in a massacre ending with the Chaps winning 63-3.

After running through their hand painted banner with the modo ‘Hustle and Heart set us apart’, Katy received to start the game and were immediately welcomed to the semifinal round by Westlake who forced them to punt early. Katy’s defense followed in the same manner forcing Westlake to punt. On Westlake’s next drive they needed to make a play. They started with a 17-yard pass from quarterback Kirkland Michaux to Ryan Lindley. Next Michaux rolled out to his left firing a missile downfield to receiver Mason Mangum for a 33-yard touchdown.

After once again punting Katy’s defense would put up a fight. Mustang linebacker Martian Nowlin was able to sack Kirkland Michaux for a 15-yard loss. Starting in amazing field position on Westlake’s side of the field Katy put a nine play drive together highlighted by Keaton Kubeckas 15-yard catch to set them up for a field goal they would make.

The field goal was a bright spot for Katy and would remain so as their nightmarish first half would drag on and on. Westlake had the ball and were looking to end the game early. Jackson Coker, a jack of all trades, was lined up at running back, Kirkland Michaux found him on a middle seam route for a 60-yard catch and run straight into the endzone.

Westlake’s dominance would continue as defensive end Austin McClendon sacked quarterback J Jensen III. Capitalizing on the short field Kirkland Michaux would find Jake Misch in the back of the end zone for yet another Westlake score. Michaux also found freshman receiver Jaden Greathouse on the quick slant for a 6-yard touchdown.

With 45 seconds remaining in the half, Katy was just trying to make it to halftime alive but Westlake would not let that happen as they hunted the Mustang’s returner down forcing and recovering a fumble. As the Chaps had all game they threw the ball deep and on this play all-time leading Westlake receiver Mason Mangum was the recipient of a 38-yard touchdown.

Heading into halftime Westlake was up 35-3 and showed no signs of slowing down. On offense, the Chaps were finding holes and exploiting them as Kirkland Michaux had five first half passing touchdowns. The defense was doing their part and I would attribute that to the defensive ends. They collapsed the pocket on passing plays and more importantly played the inside zone and option hand-off incredibly well.

Westlake received to start the second half and the game was all but over as they quickly reasserted their dominance. It started out with a 41-yard touchdown pass to Jackson Coker who was left wide open in the end zone without a defender in sight.

Westlake defensive back Lucas Mireau then intercepted J Jensen III’s pass setting up yet another deep Westlake throw. Mason Mangum would run a great corner-post pattern to find himself once again open in the end zone for his third touchdown and Kirkland’s seventh. Kirkland Michaux wanting to add a little extra scrambled for a 29-yard touchdown to put yet another nail in the coffin.

Kirkland Michaux totaled 215-yards on scoring plays alone, and 302-yards on the day. Mason Mangum lead in the receiving game with 143-yards, all three of his touchdowns were in the 30-40 yard range. Jackson Coker who had 100-yards on the night averaged 33.3-yards per touch as well as a 66% touchdown rate for every touch.

Westlake’s backups came in to the game for the remainder of the fourth quarter. Head coach Todd Dodge and his 2019 Westlake Chaparrals are heading to AT&T Stadium next Saturday to attempt what has not been done in the last 23 years…Bring a championship title home to Westlake. The Chaps will face the number four ranked Texas team Denton Guyer, who is fresh off a 35-17 win over Westfield.

North Shore too much for Cavs 2nd year in a row.
Wimberley QB Cooper McCollum