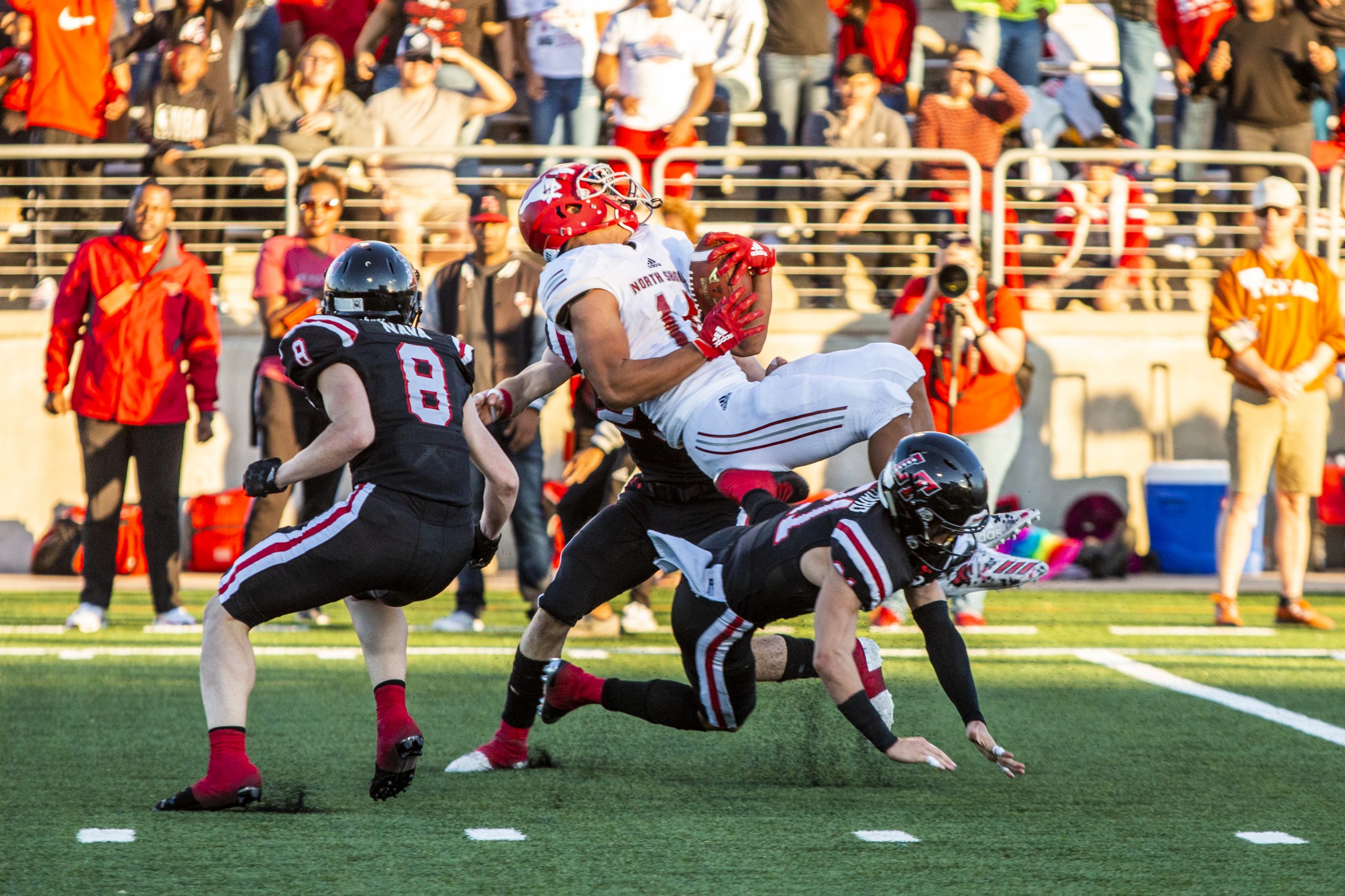 North Shore too much for Cavs 2nd year in a row.

North Shore too much for Cavs 2nd year in a row.

The final score didn’t come close to telling the whole story of Galena Park North Shore’s 49-38 win against Lake Travis Saturday at Kelly Reeves Athletic Complex in the Class 6A Div. I State Semifinal in Round Rock, TX. A year after getting run off the field by the same team in the same round of the playoffs, Lake Travis scored 35 second-half points to give North Shore a legit scare before falling valiantly in the end.

“What a great response by our kids,” said Lake Travis coach Hank Carter. “Football coaches get up there and they talk about being resilient and mentally tough, and I think a lot of people that don’t get it would say that’s just a bunch of coach speak. But this is what it’s about. The way our kids came together and our coaching staff got together with the kids at halftime, made some adjustments, and we fought and clawed. We at least made them nervous and that’s more than we did a year ago. They’re a great team. They’re very well-coached. They’re extremely talented, and they’re very deserving of the victory. But I’m very proud with how our kids responded.”

The big mystery at the start of the game concerned North Shore senior running back Zach Evans, who was nowhere to be seen at kickoff. The 5-star prospect who is almost universally considered the No. 1 tailback in the country was taking the SAT and didn’t check in until the final minute of the first half. Once he finally got on the field, he showed exactly why he’s sought after by almost every major college football program in the country by rushing for 169 yards and two touchdowns on 17 carries

His absence, however, wasn’t much of an issue for North Shore’s offense in the first half. Instead of giving it to Davis, the Mustangs handed the ball off to senior Roger Hagan, who rumbled for 117 yards on 22 totes. Junior quarterback Demetrius Davis was also dialed in. He finished with 234 total yards (125 passing, 109 rushing) and four total touchdowns (3 passing, 1 rushing) as North Shore built a 28-3 halftime lead.

“They went to the bullpen and brought out a guy (Hagan) throwing 105 miles an hour,” Carter said. “The Evans kid is tremendous and everyone obviously knows about him. I think, to me, though, the guy that makes them unique and special is their quarterback. He runs the ball as good as any running back that I’ve seen and he’s making great decisions with the football and he’s throwing it on the money. Coach Kay does an excellent job with his team and they played like champions tonight.”

Lake Travis never found a way to truly stop North Shore’s ground game as the Mustangs rushed for just a shade under 400 yards, but the Cavs’ offense got into a groove in the second half and almost sparked an incredible comeback. After throwing for just 26 yards on the first half, senior quarterback Hudson Card left it all out on the field after the break and finished with 357 total yards (290 passing, 67 rushing) and three total touchdowns (2 passing, 1 rushing).

His determination shined on Lake Travis’s final two drives. With the Cavs trailing by 25 in the fourth quarter, Card broke off an electric 28-yard scoring run where he fought through arm tackles, reversed the field against one of the fastest defenses in the state, and successfully dove for the pylon as a Mustang play tried dragging him down. On the next possession, he made eyes almost pop out of their sockets as he seemed wrapped up by the North Shore pass rush, only to break free, tip-toe the sideline, and complete a 26-yard pass that set up a three-yard touchdown run by Weston Stephens.

“Early on I think they were getting a little bit of pressure on us so we’re probably holding on to the ball for just a little bit longer than we needed to,” Carter said. “They were covering us well. Again, credit to North Shore. But he settled in, made some great plays. I told him on the one that he scored there, ‘oh man, I guess you still can run.’ And he’s doing all that on probably about 50 percent of how his foot oughta work.”

Lake Travis also recovered an onside kick and forced two second-half turnovers to keep hope alive. The first turnover was a leaping interception by sophomore defensive back DJ Johnson, who went up and snagged a hard pass in zone coverage that Davis thought he could get over him. There was also a fumble out of the end zone. And, of course, senior wide receiver Kyle Eaves, who did as much as anybody to keep the Cavs alive with eight catches for 155 yards and a touchdown.