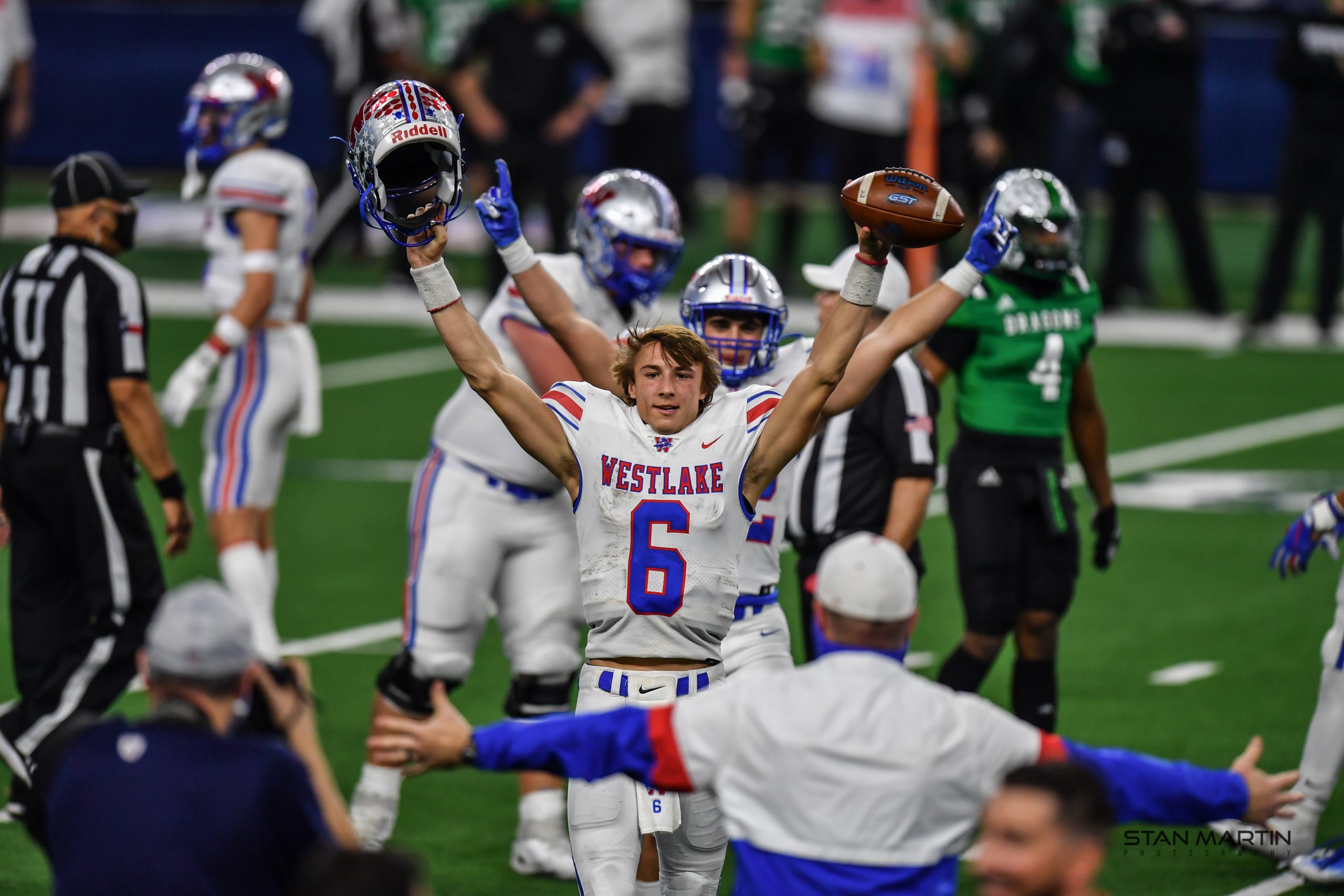 ARLINGTON — The Dodge Bowl began as a back-and-forth shootout, but a second-half landslide by Austin Westlake helped father Todd Dodge reign supreme in a once-in-a-lifetime matchup against Southlake Carroll, which is coached by his son, Riley.

The Chaparrals prevailed 52-34 at AT&T Stadium after striking for 31 straight points to turn the tide after Westlake found itself tied with the Dragons at 21-all in the second quarter.

Westlake’s Michael Taafe, who was named the game’s Defensive MVP, picked off Quinn Ewers to end the first half and added a spectacular one-handed pick in the third quarter as the Chaps surged to a multi-score lead.

It was another dominant performance for the Chaps (14-0), who claimed the Class 6A Division I state title a season after winning the Division II championship.

“It was a slugfest,” Westlake head coach Todd Dodge said. “Our defense answered the bell in the second half. Offensively, that’s the best game our offensive team played all year long and we played well at times. In the big-time games, big-time players step up.”

Westlake led 28-21 at the half and immediately marched toward a touchdown in the third quarter that was tallied by Nakfoor on a 4-yard run.

On Carroll’s next drive, Taafe plucked a Ewers pass out of midair with an outstretched right hand, and moments later, Klubnik jogged across the goal line from 4 yards away to give the Chaps a 42-21 lead.

From there, Westlake began to assert its will and kept piling on the points.

“It wasn’t anything that we really changed,” Taafe said of the second-half turnaround. “To be honest, we were a little nervous. I was, too. They kicked us in the mouth the first couple of drives and we just said to ourselves, ‘Do we want to keep doing this, or do we want to stand our ground and stop it?’ That’s what we did — we got some turnovers and it worked out in our favor.”

Nakfoor tacked on a 5-yard TD run with 8:29 to go in the game, and the Dragons (12-2) added two late scores that were sandwiched around a successful onside kick.

Klubnik was named the Offensive MVP after going 18 for 20 passing for 220 yards and a score. The fleet-footed senior also ran for 111 yards and two TDs.

Minors led Westlake with 135 yards and a score, which came on a 75-yard burst during the Chaps’ first offensive snap and helped tie the game at 7-7.

Back came Carroll, as Ewers went up top and found Brady Boyd for a 49-yard TD. Westlake wasted little time responding, as Nakfoor found a seam and sprinted ahead for a 38-yard score.

The two teams again traded scores in the second quarter. Greathouse put the Chaps in front with a 15-yard reception in the end zone on a perfectly-thrown pass by Klubnik, but Boyd answered by hauling in a 27-yard score from Ewers.

From there, however, the Chaps’ vaunted defense began to come up with some key stops. Klubnik tallied a 1-yard scoring run with 1:12 to go in the second period to give Westlake the lead at 28-21, and the Chaps caught fire down the stretch to seize the program’s third state championship overall.

“This football team that I had the pleasure of coaching this year collectively loves the game of football more than any team I’ve ever seen,” Todd Dodge said. “I can’t tell you how proud I am of them. We had to kind of will our way to a victory.”

Following the triumph, Westlake’s coach said his message to his son Riley was simple.

“I told him I loved him,” Todd Dodge said. “I told him I’m so proud of him and I told him he has one hell of a football team.”