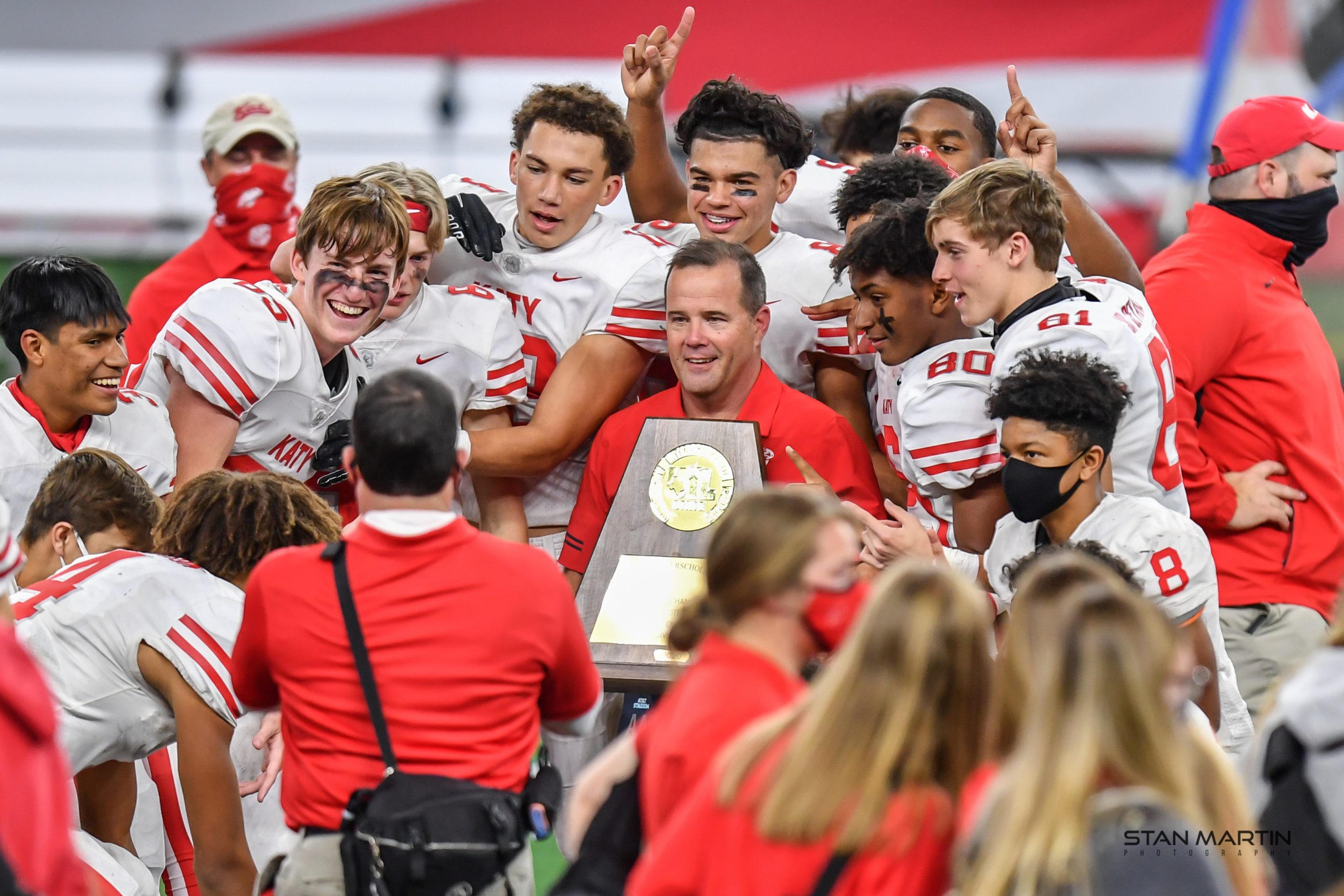 The Tigers blasted the Longhorns 51-14 to claim the Class 6A Division II title — the program’s ninth state championship overall.

Katy (14-1) put the clamps on Cedar Hill’s offense from the outset and began to grind away with its potent rushing attack featuring the sibling duo of Seth and Jalen Davis. The Tigers also caught the Longhorns napping on a few play-action passes over the top.

Joseph said his team made a commitment to chase greatness after dropping a district game to Katy Tompkins back in early November.

“We got better all year long, and that’s the objective,” Joseph said. “I told them we lost a district game in 2008 and turned around and won a state championship. I told them it was possible but they’d have to roll their sleeves up and go to work. Those kids did. They responded great after that.”

Katy leapt out to a commanding 24-0 lead at halftime against Cedar Hill (12-2) and kept the pedal to the metal in the last two quarters. The Tigers tallied two defensive scores to help salt away the runway victory, as Hamilton McMartin returned a fumble 55 yards for a score and defensive end Cal Varner later notched a pick-6 against Cedar Hill quarterback Kaidon Salter.

Varner was named the Defensive MVP of the game, but Joseph said his defense revolves around a team-first mentality.

“Each one of them understands they have a job and they had a role and then they all fit together,” the coach said. “It’s not about an individual — it’s about a team.”

Davis was named the Offensive MVP after rushing for a game-high 124 yards and a score. His brother, Jalen Davis, added 109 yards and a TD of his own.

Katy vaulted ahead 7-0 in the first quarter after taking advantage of Cedar Hill’s attempt to slow the Davis brothers. Caleb Koger found a wide open Taylor Saulsberry for a 37-yard TD toss on play action, and Jalen Davis opened the second quarter with a 3-yard TD run.

Nemanja Lazic drilled a 48-yard field goal later in the period, and Isaiah Smith broke loose for a 55-yard scoring jaunt with just 36 seconds to go before intermission.

The Tigers’ lead increased to 34-0 in the third period after Lazic connected on a short field goal and McMartin notched his scoop-and-score fumble recovery.

The Longhorns broke up the shutout bid when Salter scored on a 4-yard run with 4:28 to go in the third, and after Lazic made his third field goal of the afternoon, Salter scampered into the end zone from 10 yards away.

Katy finished strong in the final stanza thanks to a 25-yard TD run by Seth Davis and Varner’s interception return, which went for 15 yards.

“We just worked hard in practice every single day,” Seth Davis said. “My brother is a big mentor for me and I couldn’t do anything without my brother. I love him and I’m thankful I got the opportunity to win it with him.”

The Tigers’ second score of the game was set up by a diving interception from Shepherd Bowling. Katy’s defense frustrated Salter — an Tennessee signee — for much of the game and threw Cedar Hill’s offense completely out of sync.

Salter finished 12 for 24 for 112 yards as the Longhorns were held to just nine total first downs.