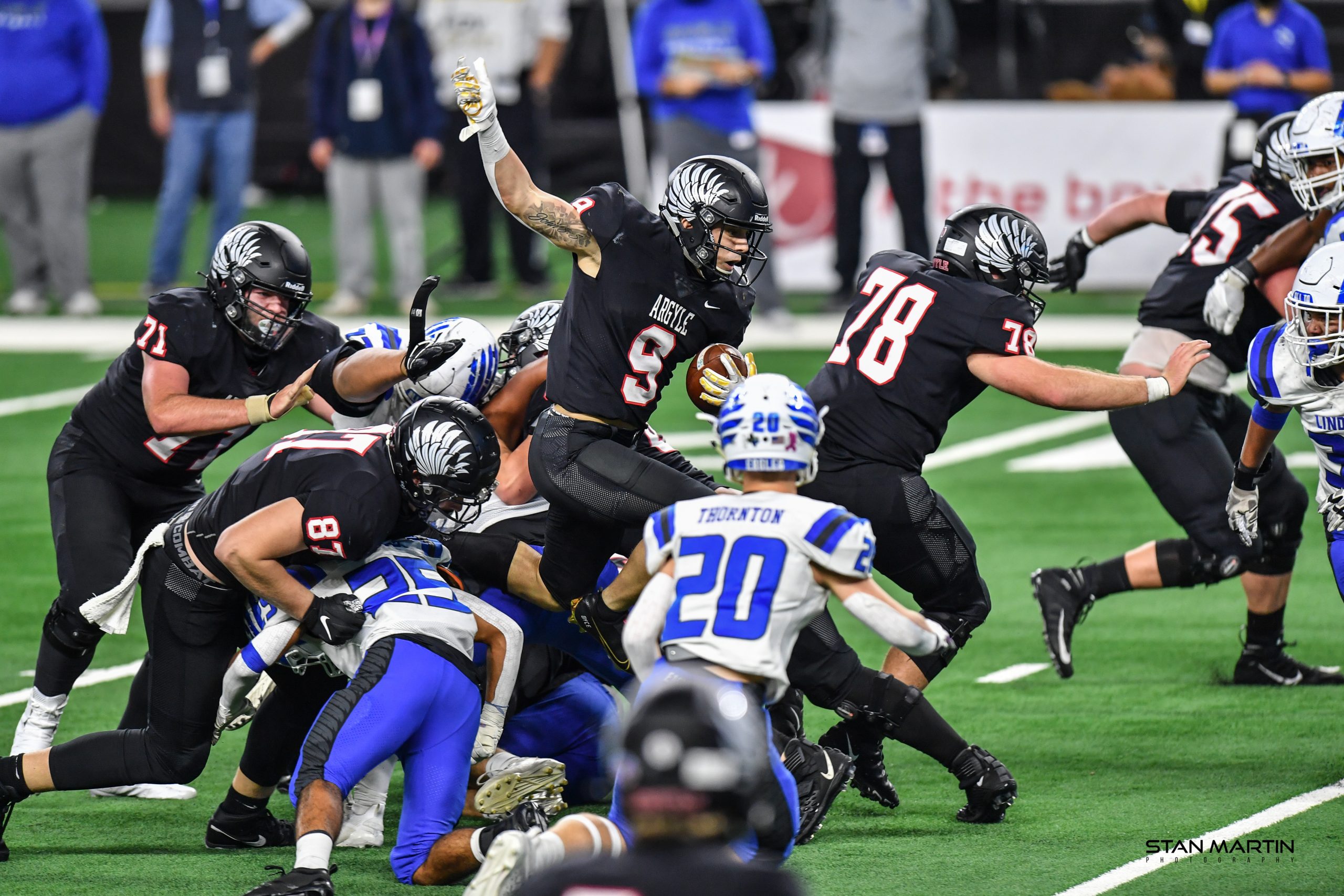 ARLINGTON — Argyle’s 49-21 victory over Lindale in the UIL Class 4A Division I state championship felt more like a coronation than an actual competition.

The Eagles (16-0) wrapped up an immaculate 2020 season after jetting to a 28-point lead and cruising to the finish line from there. Along the way, senior running back Tito Byce rushed for 152 yards and found the end zone four times en route to being named the game’s Offensive MVP.

“It’s a joyous event,” Argyle head coach Todd Rodgers said. “I’m proud of my football team. I think they played like champions tonight. They were really focused the entire week. It was amazing to go out there and apply it in such an unusual environment. This is the biggest crowd we’ve played in front of all year. We loved it.”

Argyle left little doubt which team reigned supreme in 4A-I after flexing its potent offense on the opening snap of the contest. The Eagles saw quarterback CJ Rogers toss a 44-yard pass to Cash Walker, and eight plays later, Byce bulldozed his way across the goal line from 1 yard out.

Byce added three more scoring runs prior to halftime, and Argyle took a 28-0 lead into the locker room. Byce capped drives with TD rushes of 4, 2 and 2 yards as the Eagles left Lindale in a cloud of dust at AT&T Stadium.

The performance was even more meaningful for Byce given the fact that he was forced to watch the end of 2019 from the sidelines after suffering a torn ACL.

“It’s been a crazy journey,” Byce said. “I went right to work after I got surgery. All of my teammates and my coaches just pushed me super hard and I had the whole community behind me and it turned out great like we wanted it to.”

Lindale (13-3) broke up the shutout in the third quarter when Sam Peterson tallied a 6-yard TD run, but Argyle was content to trade scores with the Eagles during the second half.

Rogers threw three scores for Argyle after halftime, finding Jasper Lott on throws of 2 and 4 yards in addition to connecting with Ward McCollum for a 43-yard TD strike. The signal caller finished 23-of-30 passing for 357 yards as the Eagles romped to the program’s second state title on the gridiron.

“He’s been a fabulous quarterback and an amazing leader on our team,” Rodgers said of his QB. “I’m glad it all turned out that way for him and the rest of the people that did the work when nobody else was watching.”

Argyle’s defense also held up its end of the bargain by slowing down sensational Lindale running back Jordan Jenkins, who managed 112 tough yards on 26 carries.

“You’re never going to stop a great running back like that,” Rodgers said. “You just need to slow him down a whole bunch and kind of take him out of the game per se. And we were able to do that.”

Following the completion of the contest, Argyle senior defensive back Zach Stewart was named the Defensive MVP after he recorded 6 1/2 total tackles and also broke up a pass.  “I think we played all year with an edge,” Stewart said. “We felt we needed to go out and prove ourselves every game, and I think we did that.”