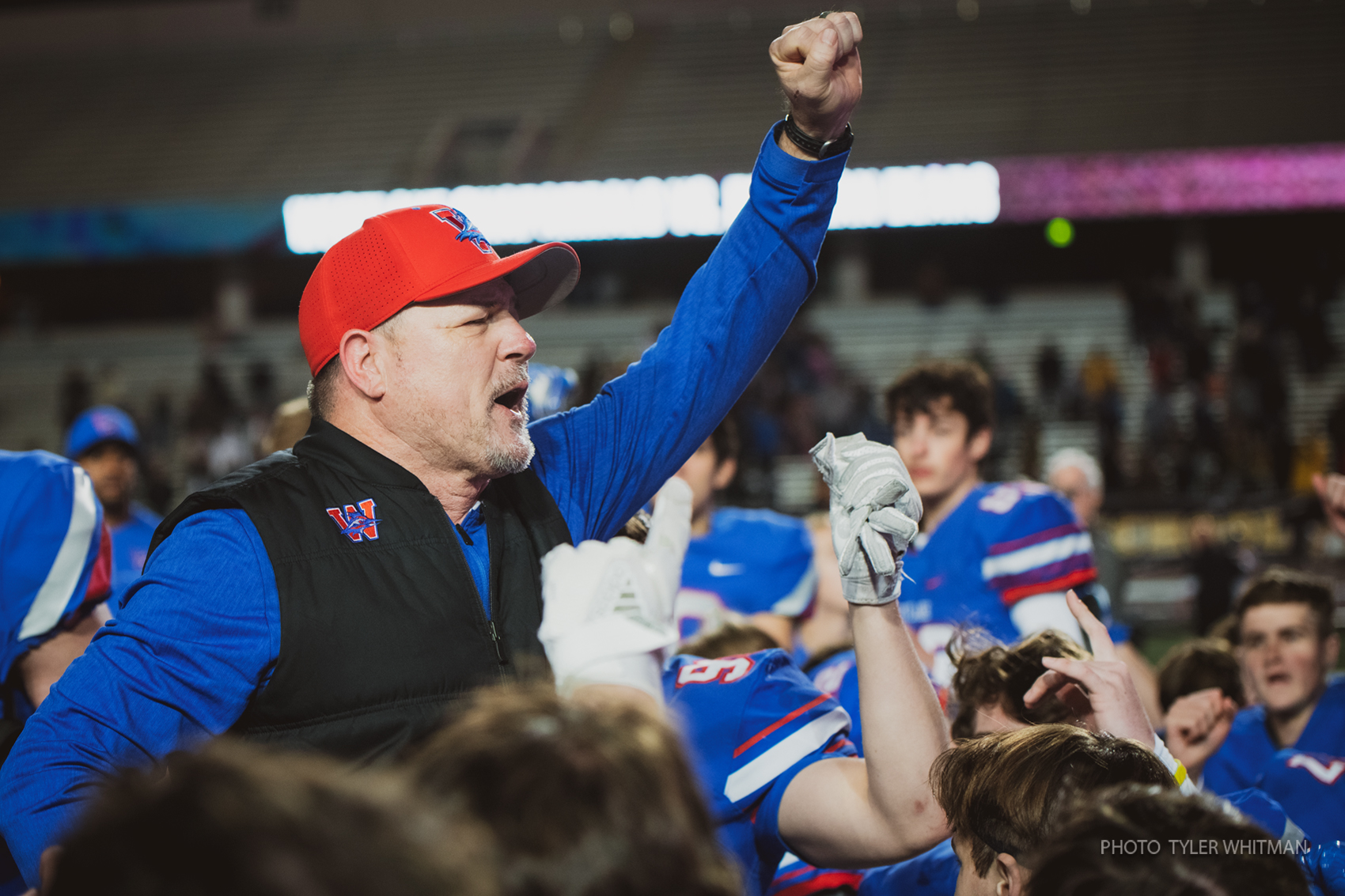 A rematch of last year’s second round Texas high school football playoffs took place at Bobcat Stadium. Friday night the fans cheered on their championship dreams as the Westlake Chaps squared up against the Brennan Bears. Westlake were the kings of the matchup coming into tonight after winning 49-7 last year and they looked to defend that crown in an elimination game. Last year there were fireworks with 99-yard touchdowns and blocked punts and though this game did not light up the sky, it was a fun watch. Westlake stifled Brennan 24-6 in a defensive game.

“We took it more seriously”, says Westlake quarterback Kirkland Michaux about preparation for this game. “Each round it gets tougher and tougher. It’s a lot of being in the film room and practice on the field so I think we prepared well and that showed up.”

Brennan received to start the game. Looking for early momentum the Bears looked deep to speedy receiver Jalen Spells. Spells beat the coverage but could not bring the ball in as it hit off his hands for what would have been a walk-in touchdown. The Bears would eventually punt later in the drive.
Starting in great field position due to a weak punt, Westlake was in a prime position to score. After a 7-yard pass to Mason Mangum, Kirkland Michaux scrambled for 5 yards and got an additional 15 on a facemask. Mason Magnum would than slash the Bears defense for a 24-yard touchdown reminding Brennan of last year when he caught a 99-yard touchdown on the opening drive.

Brennan needed to muster up a strong drive to not give Westlake momentum or a bigger lead. It did not help that Brennan started inside their own 10-yard line. Senior quarterback David Varela finally connected on the deep ball as he found Keion Thomas 55-yards downfield for a field-position flipper. Trying to press the advantage the Bears would opt to go for it on 4th down and ultimately come out empty-handed.

After both teams were forced to punt Westlake wound up with the ball. The Chaps were running the ball straight down Brennan’s throat as the drive totaled nine carries for 32-yards most of which were due to stud running back Zane Minors. Senior quarterback Kirkland Michuax would then find Jackson Coker on a quick slant for 8-yards and a touchdown giving the Chaps a two-score lead.

Another drive, another score, was the Chaparral’s mentality as they would once again march downfield towards the Bear’s endzone. The drive was highlighted by a 20-yard catch by freshman receiver Jaden Greathouse and Ryan Lindley’s 10-yard TD grab.

“The whole offense had a great game. The offensive line kept me off the ground. The receivers made a lot of catches when the balls were on them. The defense definitely carried their weight, we could not have done it without them”, said Michaux praising his team.

Strangely enough, the first half of this game was not too dissimilar to last year’s game between Westlake and Brennan. In both games Westlake dominated the first half, and held Brennan to a goose egg on the scoreboard. If that is not enough, Jackson Croker and Mason Magnum had both caught touchdowns, giving fans a sense of déjà vu.

Coming out of halftime Westlake got the ball and had one goal in mind: put the game away. It would be a long journey to do that as they were backed up inside their own 5-yard line. Zane Minors did not care as he broke loose for 30-yards giving the Westlake offense some breathing room. After that the Westlake offense did nothing, I mean nothing, in fact, they went backward and were forced to punt the ball away.

Brennan was once again forced to punt the ball as Westlake’s defense stood strong. The punt ended in Brennan’s favor as Westlake’s punt returner Sage Luther fumbled the ball and Brennan recovered. The Bears offense did nothing with the ball and were unable to put up points. This was a testament to how the entire game went, the Bears offense was simply not able to move the chains, Brennan quarterback David Varela had only completed 2 passes in the first half.

“We’ve got a lot of veterans that have played a lot of football and all the guys that were brand new at the beginning of the year, are not rookies anymore”, said Westlake head coach Todd Dodge of his defense. “We’re experienced, we’re healthy and our kids have been consistently good on defense.”

Westlake’s offense showed flashes of greatness throughout the whole game. Westlake quarterback Kirkland Michaux made better reads and made them quicker. Michaux stepped up his game completing 8/11 passes in the first half, including three touchdowns as well as going turnover-free.

When asked about what Michaux did differently in practice coach Dodge had this to say, “Get more reps out of fewer things. I think that’s important, the one thing is that we got a whole lot of offense installed at the 12-week mark and if you are not careful you try to do everything a little bit well. One thing we did this week is we went back and really kind of cut the fat in both run game and pass game, screen game. Everything else is really just adjustment based. We did a great job throwing the football in the red zone.”
Westlake will go onto the third round of Texas high school playoffs where they will face Weslaco East who are fresh off a 24-10 win against Rowe. This is a game where Westlake is favored but you never know what is going to happen on any given Friday.

When asked does this Westlake team have what it takes to go all the way, Kirkland Michaux said, “Yes, it does. We are one of the most close-knit group of guys you will ever see on a team and I feel like that is a big deal. I feel like we have a pretty good chance.”

For Westlake head coach Todd Dodge this was a special day for two reasons. First of all, he won a playoff game but that win was also his 200th career win as a head coach. Dodge has this to say about his 200th win, “It means a lot. The biggest thing that I think when I think of 200 wins, is I am so blessed that we did it here with this group of kids here at Westlake. Our Seniors were 7th graders when we first got here, we’re all they know and they’re all we know as far as a football program so it is really special to get that 200th win with them. Now we’re going to try and fit 3 or 4 more wins in there.”