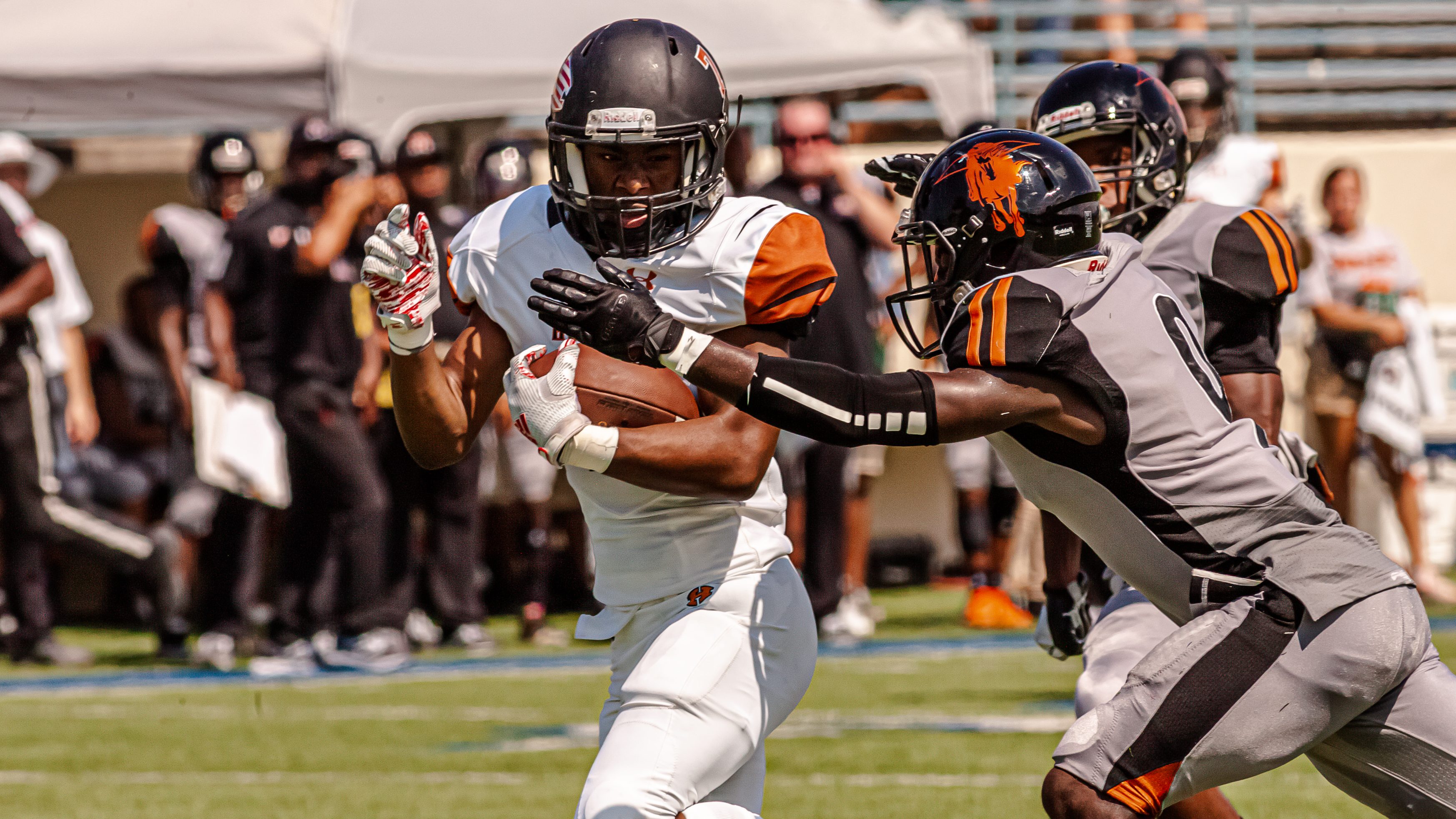 Hutto looked a lot different than it did last year, but the results were still the same. While the offense needed some time to get going, the defense dominated as the Hippos ran away from West Mesquite in a 41-21 win Saturday at Waco ISD Stadium in Waco, TX.

West Mesquite scored on only one of its first ten possessions, and that came on a drive that started at Hutto’s eight. Junior LSU commit Landyn Watson combined with senior Lordswill Uwa and junior Braylon Sugg on a defensive line that didn’t allow the Wranglers to get the push up front necessary to move the ball consistently.

“To put 41 points on the board, you’d think that’s an offensive number, but let’s start with the defense and the way that they played,” said Hutto head coach Brad LaPlante. “You noticed that they weren’t running inside? They were throwing the screens outside to try to get downfield, or running to the outside edge… They were not going to line up at their own 25 and drive the length of the field all day.”

West Mesquite scored 14 of its points in the fourth quarter with the game out of hand and Hutto playing its backups on defense. The defense even got in on the scoring when senior Jordan Phoenix intercepted a tipped pass and returned it 43 yards for Hutto’s first touchdown.

That play helped spark a Hippo offense that started the game playing like it had a lot of new faces. Sophomore quarterback Grayson Doggett’s first pass was intercepted when he threw late on a short out route. West Mesquite scored on the next play to take a 7-0 lead.

But the offense dealt with few issues after that. Doggett rebounded nicely and finished with 278 yards and a touchdown on 19-of-26 passing. Senior Xavier Phoenix caught the lone score on a three-yard fade route. Sophomore Jairiez Lambert provided a pair of explosive plays with receptions of 40 and 41 yards. Senior Dajon Harrison, one of Hutto’s lone returning starters, caught five balls for 55 yards.

“(Doggett is) fine. If you’re ever going to judge a kid based on one play you’re probably not going to be in the business very long. If you saw our coaching staff, all we did was go back and coach,” LaPlante said. “His maturity is way beyond a sophomore, as well.”

Hutto was also able to lean on a run game that churned out 196 yards on 30 carries, most of which came in the second half. Senior Makhi Kimble (18 carries, 148 yards, three touchdowns) helped put the game out of reach with scoring jaunts of 68 and 26 yards in the third quarter. Senior Kendall Williams (five carries, 46 yards, one touchdown) scampered for a 19-yard score in the fourth quarter to cap a 42-0 run for the Hippos.

“Here’s the deal with Mekhi, he’s kind of been the secret,” LaPlante said. “Last year we had a different brand of offense with (former running back) Chux Nwabakou where we were throwing the ball a little bit more. But even though Mekhi is not a huge guy, he can run between the tackles. He’s got great feet. He’s got great vision. He keeps his feet going. He just moves the pile. I’m going to say he’s the reason our offensive line got better today because they believed in him, so that’s just how one player can make the guys elite around him… But I think that we made an identity for our offense through the game that we have not been able to do during fall camp.”