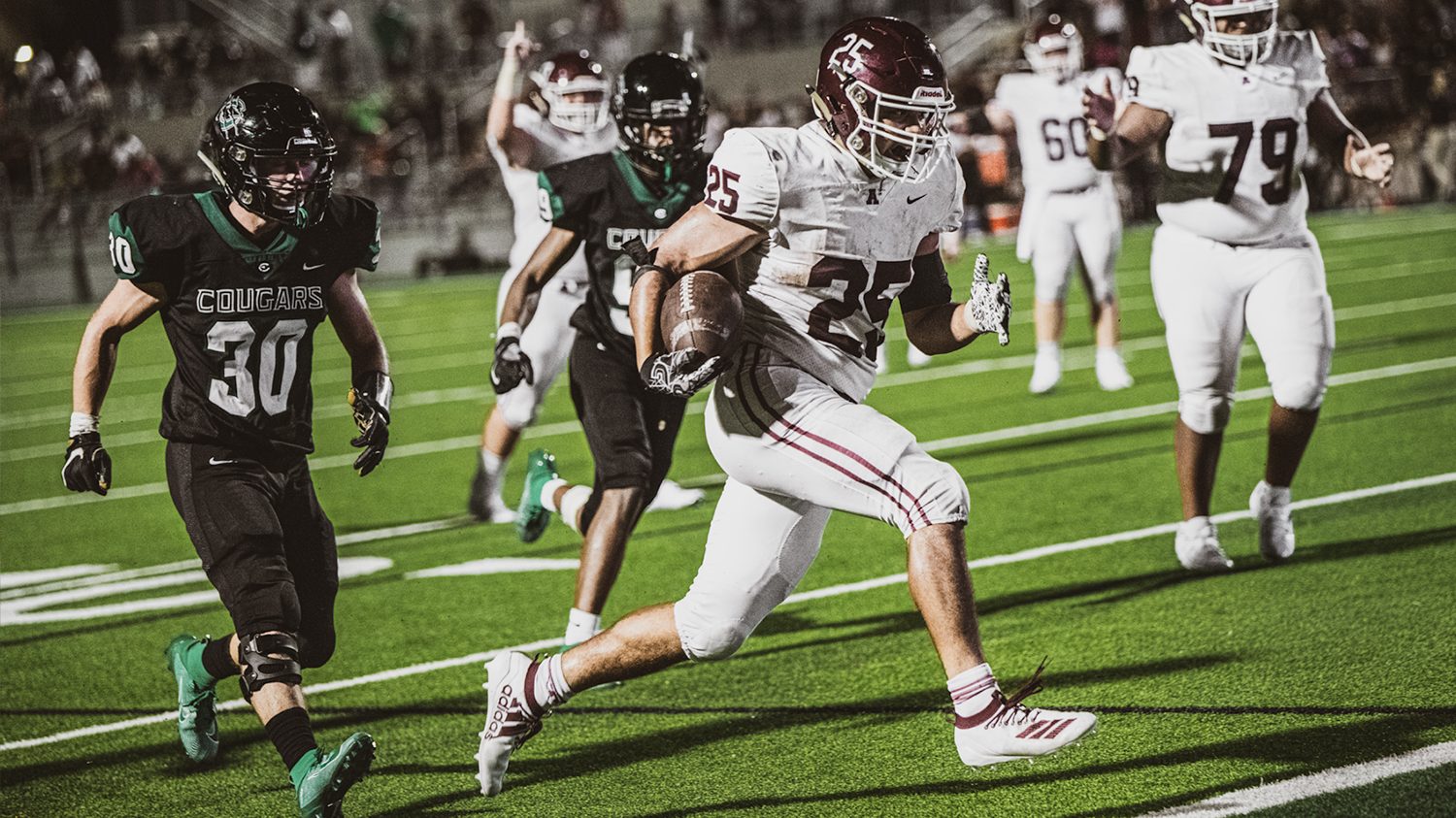 The sun sets in Pflugerville, the lights of the Pfield Stadium come on. You can hear the marching bands warming up and the counting off of the drill team. Welcome to Texas high school football. The Austin High Maroons and the Connally Cougars are about to run through the tunnels and take the field in their first official game of the 2019/20 high school football season.
The crowds in attendance were treated to a high scoring shootout that was neck and neck up until the final minutes of the fourth quarter. The Austin Maroons claimed victory over the Connally Cougars 51-49.

Austin receives the ball to start the half. The Maroons were given the opportunity to test this Cougars defense staring corner-back Jahdae Barron, a senior ranked 57 in TX, with a hard commit to Baylor. Both offenses were off to a slow start with Austin scoring on only one of their four red-zone trips. Connally was not having much luck either as they were not able to establish a passing game over the middle which allowed Austin to bring more pressure and cover the boundary side of the field. Lead by Head Coach Jason Cecil, Connally entered halftime with a 14-7 lead.

Both defenses played well in the first half with Austin forcing two interceptions and Connally forcing an interception and fumble.
Both teams had improvements to make. Cougars passing attack left much to be desired, especially in the middle of the field. On the flip side, Austin had a problem with pass protection as the Connally Defensive Lineman could not be stopped. The Maroons solved this problem by changing up their blocking scheme as well as their personnel.

After halftime, the whole attitude of the Maroons team changed, it may have been Mike Rosenthal’s pep talk, the coaching adjustments or a mix of both. After a disappointing 1st half the Austin High Maroons came out firing scoring 30 points just in the third quarter. Everything looked much better, the pass protection was on point as well as the passing game which totaled 331 yards. What stood out was Austin’s running game led by senior Grayson Davis. With 222 rushing yards on 23 carries which amounts to an average of 9.65 yards a carry, Davis’s running game was truly spectacular, add on two touchdowns and Grayson Davis had a game.

Junior Quarterback Charles Wright did not let the pressure affect him as he threw for 331 yards as well as four touchdowns. Junior Receiver Nick Anderson stepped up in a big way making a 40+ yard catch on the first drive of the second half. He only improved from there posting five catches for 147 yards and a touchdown in the second half.

Scoring point after point the Austin High offense was unstoppable in a race against the Cougars offense who would not go down without a fight. Though Bernard Riley’s defense allowed 49 points, when it was imperative that the defense hold the offense – they held them. An example is when Connally went for a two point conversion late in the third quarter, Junior Quarterback Darius McGrew was stripped of the ball ultimately ending the two point conversion try and sustaining the Austin lead; this was one of many defensive stops by Austin’s defense.

I attribute the Austin High Maroons second half offensive success to the coaching staff specifically Offensive Coordinator Aaron Vanecek as well as both Offensive Line coaches Mike Rosenthal and Neil Abbott.
“Biggest difference from last year is that this group listens to coaching and they want to improve.  They are buying into what we are teaching and they are making the adjustments. It is early in the season, but I am excited each week to get on the practice field and improve”, said Head Coach Michael Rosenthal.

The Austin High Maroons carried their preseason momentum into the regular season clinching the win over Connally in an exciting matchup. Watch out Westwood the Maroons are coming.