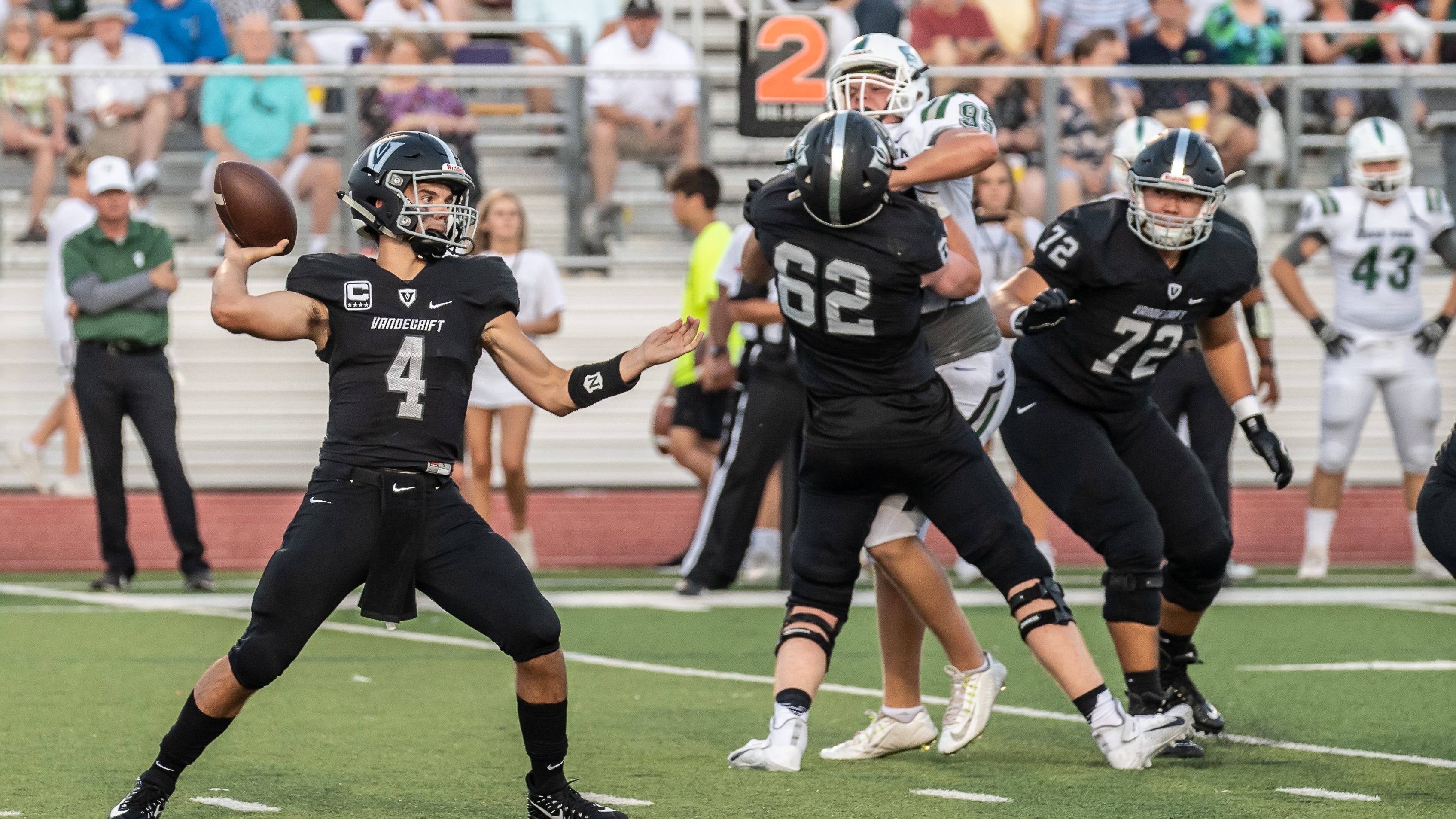 No. 2 Vandegrift started its season right where it left off. The Vipers delivered a dominant defensive performance, just like they did so many times last year, in a 17-0 shutout of No. 6 Cedar Park at Monroe Stadium on Friday in Austin.

“It’s impressive,” said Vandegrift coach Drew Sanders. “My defense surprised even me tonight because we replaced a lot of guys. We didn’t have everybody back. We replaced several guys on the defensive line, both corners, replaced a safety and replaced a linebacker, and for us to come out and play like that is just total belief in our system, and they really played with great effort.”

Vandegrift held Cedar Park to 140 yards on 49 plays for 2.9 yards per play and completely stuffed the ground game for two yards on 24 carries. Going back to last year’s matchup, the Vipers have kept the Timberwolves off the scoreboard in seven of eight quarters.

Cedar Park didn’t even cross midfield until the fourth quarter and needed a fake punt to do so. Junior defensive back Kaleb Lewis had two interceptions, the second of which came in the end zone late in the game to extinguish the Timberwolves’ best scoring threat.

“Our coaches really drilled it into our head to stay in coverage and a lot of those two plays were (Cedar Park quarterback) Ryder (Hernandez) scrambling around and I just kept my eyes on him and read his eyes, and when he threw it I was just sinking into place,” Lewis said. “It was just super exciting because I get to trust all those guys and I really trust them and you can tell with how we all play and communicate and I was just in the right position because we trust the coaches and they gave us good play calls.”

Vandegrift leaned on two players for almost all of its offensive production with junior running back Bowen Lewis and senior wide receiver Trey Mongauzy combining for 252 of the Vipers’ 275 total yards. Mongauzy broke the Vipers out of an early funk by breaking free for a 59-yard touchdown catch in the second quarter and finished with 10 grabs for 125 yards. Lewis iced the game with a 54-yard scoring burst in the final minutes while posting 127 yards on 23 carries.

“That’s a play we ran against Klein Collins in the second round (of the playoffs) last year and I caught it for a lot of yards. (Cedar Park) is super aggressive and they tried to undercut, so just putting a double-move corner-post on them, we knew it was going to work,” Mongauzy said of his score. “Just a lot of studying. Throughout the game, we were finding holes in their defense and we kinda just attacked them. We found good rhythm and were just hitting everything.”

Vandegrift follows its resounding season-opening win with a Thursday night road game at Killeen Ellison next week. Cedar Park will hope to rebound with a home game against Round Rock Cedar Ridge on Friday.