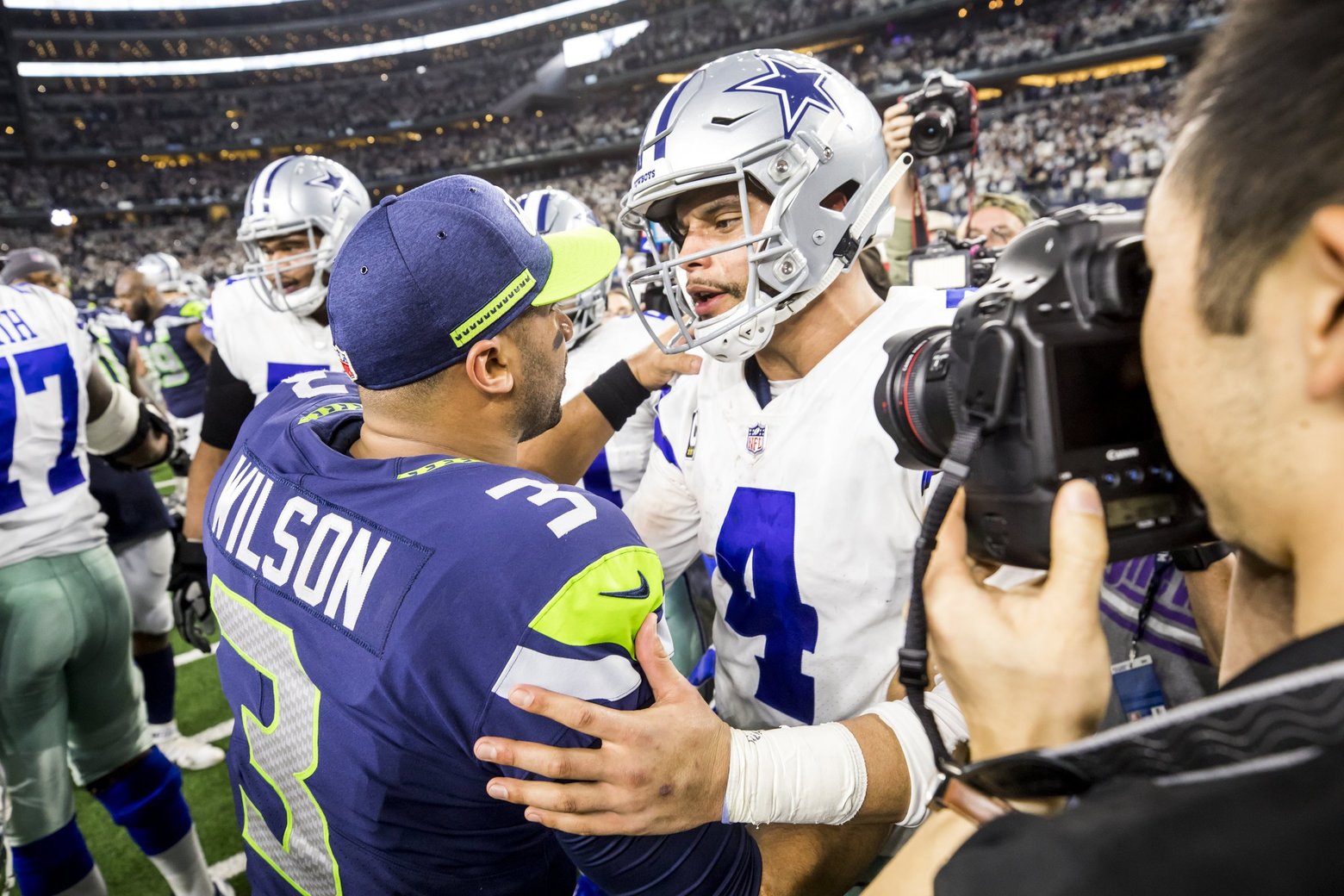 ARLINGTON — It turns out stellar defense and a strong running game can still get it done on the gridiron.

The Dallas Cowboys proved that once again Saturday night after beating the Seattle Seahawks 24-22 at AT&T Stadium in an NFC wild-card playoff battle. Unlike the 2006 postseason meeting up north, it never came down to a last-second field goal, but rather a key third down and an onside kick.

On the biggest play of the game, Dak Prescott faced a third-and-14 from Seattle’s 17-yard line and made a determined run up the gut on a quarterback draw to move the chains before being upended at the 1. The scamper all but sealed the victory, and one play later, Prescott plunged across the goal line to help increase the Cowboys’ lead to two scores at 24-14.

Russell Wilson directed a quick touchdown drive the other way and converted a 2-point try to pull Seattle within striking distance at 24-22, but former Longhorn Michael Dickson’s dropkick onside attempt was easily handled by Cole Beasley to seal Dallas’ first postseason win since a 2014 wild card triumph against the Lions.

All of the late drama unfolded as Seattle’s veteran kicker, Sebastian Janikowski, watched from the sidelines with a pulled hamstring that he suffered just before halftime.

The Cowboys and Seahawks entered the game as mirror images of each other, but Dallas proved that its ground-and-pound philosophy was the superior version. Ezekiel Elliott outgained Seattle’s running back committee of Chris Carson, Mike Davis and Rashaad Penny 137 yards to 59 and also ran in a score early in the fourth quarter to give his team a 17-14 advantage.

The Cowboys’ defense was dominant, as it forced six three-and-outs in the contest and limited the Seahawks’ explosive plays. Other than a 28-yard run by Penny in the second quarter and a few pinpoint passes by Wilson to Tyler Lockett and Doug Baldwin, Seattle’s offense was completely held in check.

Rookie linebacker Leighton Vander Esch and counterpart Jaylon Smith patrolled the field and combined for 17 total tackles. Cornerback Chidobe Awuzie stayed glued to Seattle’s wideouts and in yet another outstanding game, while the defensive line had its way with the Seahawks’ front five.

And then there’s Prescott. The oft-criticized quarterback was 22-of-33 passing for 226 yards, one TD and one interception, although the pick came on what likely should have been a pass interference call in the red zone.

It was only fitting that Prescott was able to punch it in when it mattered most to cap his first career playoff win. The clutch performance came on the heels of a confidence-building fourth quarter win over the Giants in a game that appeared meaningless at the time.

Dallas fans now hope the Week 17 comeback marked a major turning point for the third-year pro from Mississippi State, who has helped his team win eight of its last nine contests. Prescott’s contributions have been vital, as the Cowboys are a remarkable 10-0 this year when scoring 20 or more points.

Dallas will try to advance to its first NFC Championship since 1995 when it travels to Los Angeles to take on Todd Gurley, Aaron Donald and the Rams this Saturday. Kickoff is set for 7:15 p.m. CT.