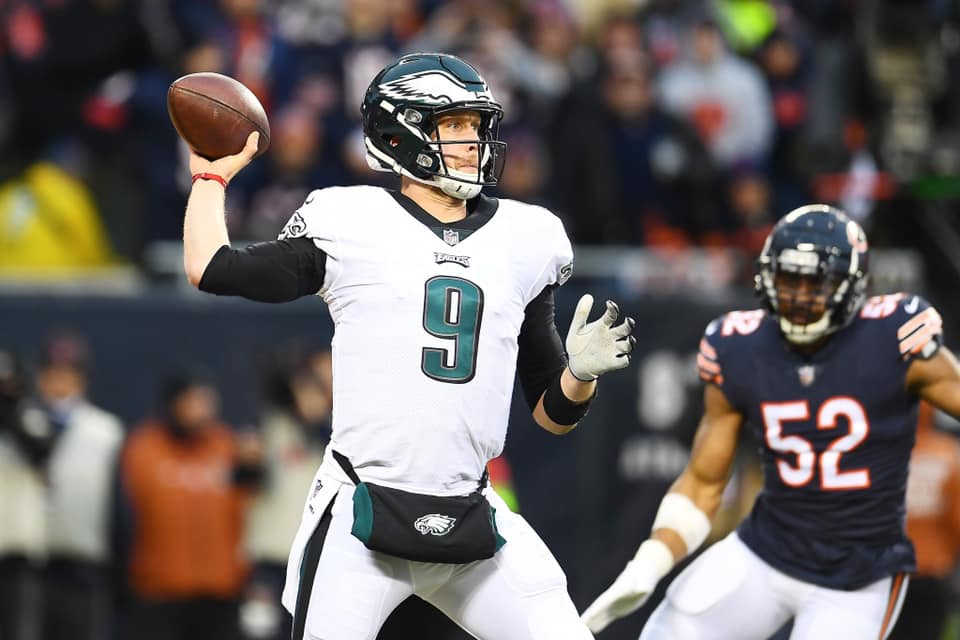 CHICAGO — Against all odds, Nick Foles just keeps on delivering in the clutch.

Playing against one of the NFL’s fiercest defenses on the road, Foles led the game-winning touchdown drive to help the Eagles upend the Bears 16-15 at Solider Field. True to form, the Westlake alum was calm and collected in even the most pressure-packed moments, as he fired a side-arm pass to Golden Tate on fourth-and-goal to put the defending Super Bowl champions in the lead.

But the NFC wild-card matchup had plenty more drama in store for both fan bases in the final minute.

After a solid kick return by Tarik Cohen, Mitchell Trubisky fired a pass to Allen Robinson down the right sideline to put Chicago in field-goal territory at the Eagles’ 33-yard line. Following a timeout, Trubisky whipped an 8-yard toss to Robinson to make it an even shorter kick.

What happened next was an unforgettable moment in NFL postseason lore.

In what has been dubbed the “double-doink,” placekicker Cody Parkey saw his opportunity to become a beloved Chicago hero push wide before striking the left upright and caroming off the crossbar and back into the field of play. The faces of Trubisky and Bears head coach Matt Nagy said everything — their jaws simply dropped in stunned silence as Philadelphia went wild.

Upon further review, slow-motion replay shows that Eagles defensive lineman Treyvon Hester got a hand on the kick, which may have altered its trajectory. However, Parkey’s struggles this season have been well documented, and the final boot could have been headed for infamy regardless of Hester’s efforts.

It was a frenetic finish to a game that began as a battle of the two defenses.

The Bears headed into halftime with a slim 6-3 lead following a dubious decision by the referees on a pass to Anthony Miller. The receiver clearly made the catch and then fumbled, but there was no clear recovery by either team. It was ruled an incompletion, and Chicago saw a chance at a touchdown wiped away.

Foles directed a seven-play, 83-yard scoring drive on Philly’s first possession of the second half that was capped by his 10-yard TD toss to rookie tight end Dallas Goedert.

The Bears opened the fourth quarter with their third field goal to pull within one at 10-9, and following a three-and-out by the Eagles, Trubisky led his team to a go-ahead score, which came on a 22-yard pass to Robinson.

Down 15-10, Foles got the ball back and led yet another improbable march toward the end zone. The reigning Super Bowl MVP found Alshon Jeffery, Goedert, Nelson Agholor and Zach Ertz before hitting Tate for a TD that kept the Eagles’ season alive.

Trubisky showed some mental toughness of his own down the stretch and was more than serviceable in his first career playoff start, as he threw for 303 yards and no interceptions.

In the end, though, Foles’ magic was enough to catapult Philadelphia into a divisional round matchup with the Saints this Sunday in New Orleans. One former Chaparral standout — either Foles or Drew Brees — will guide his team into the NFC Championship.