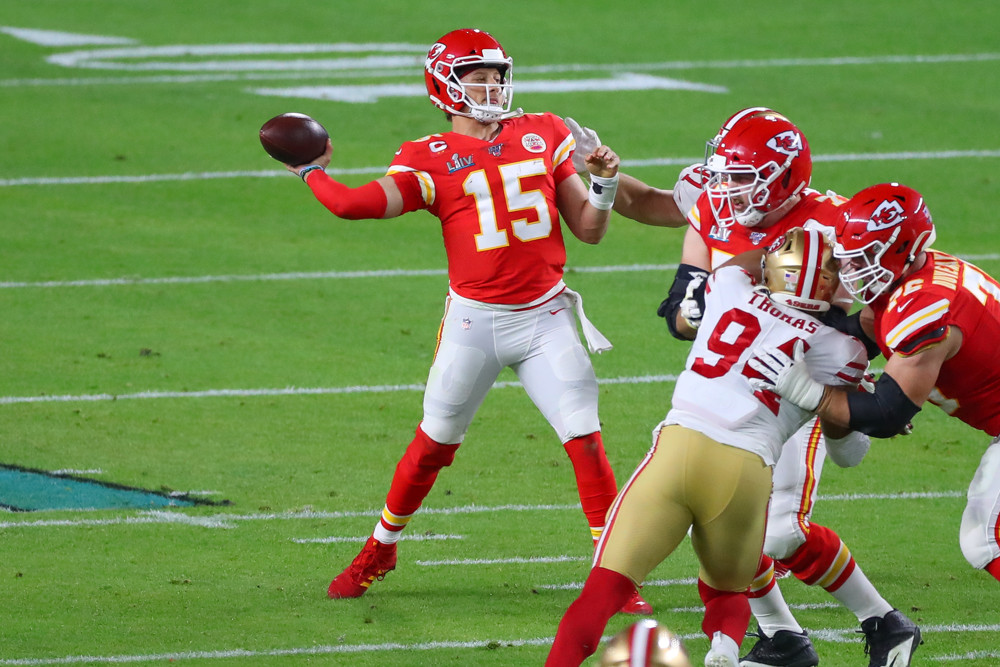 With the world watching, the high flying Kansas City Chiefs took on the smash mouth San Francisco 49ers on the biggest stage, this was Super Bowl LIV. Hard Rock Stadium in Miami, two quarterbacks were fighting to cement themselves next to battle-proven players such as Tom Brady, Steve Young, Joe Namath, Bart Starr, Joe Montana, Dan Marino and many more, while two coaches were battling for their first ever Super Bowl win. The veteran Andy Reid with 221 career wins was seeking his first Super Bowl Championship against third year head coach Kyle Shanahan.

In a match that would come down to the wire with exciting plays, the Chiefs showed their toughness emerging victorious in a 31-20 win snapping their 50 year Super Bowl drought. Patrick Mahomes not only placed himself next to the greats, but also in the record book as he is the only player to win both regular-season MVP and Super Bowl MVP in his first three seasons.
The Chiefs received to start the game, continuing their streak of slow starts they went three and out giving the ball straight to the 49ers. The 49ers had a different tone as rookie speedster Deebo Samuel took an end-around handoff 32-yards up the right sideline putting them in Chiefs’ territory. Deebo Samuel once again took a handoff for 7-yards setting up veteran kicker Robbie Gould for three points.

The Chiefs responded in a professional manner putting together a strong drive highlighted by Damien Williams who totaled 25-yards and key first downs. Spotted in the red zone it was third-and-11, Patrick Mahomes picked it up using his legs but with a price as he took a shot from Jimmie Ward, consequently Mahomes fumbled the ball out of bounds making it a fourth-and-one situation. During a confusing play all of the Chiefs players started spinning around as running back Damien Williams took a direct snap to pick up the first down. Patrick Mahomes would then run it in for a 1-yard touchdown.

The next drive 49ers quarterback Jimmy Garoppolo was heavily pressured, making a rookie mistake, he flailed the ball into the air while being taken down, this of course resulted in an easy interception for the Chiefs. The Chiefs made short work of the great field position getting in field goal range and nailing it from 31-yards out.

Garoppolo shook the interception off and channeled his inner Tom Brady as he lead his team on a methodical drive downfield. Deebo Samuel once again shone with a 16-yard catch to get them out of a jam. Garoppolo would find none other than the best fullback in the NFL, Kyle Juszczyk for a 15-yard catch and run touchdown tying the game up.

Heading into halftime neither team was being true to themselves. Both teams had gone away from what got them to the Super Bowl and it showed on the scoreboard. The Chiefs, one of the best deep threat teams in the league had only attempted one pass over 20+ yards. Whether that was due to game plan, nerves or the 49ers defense locking down the secondary they needed some chunk plays. The 49ers were not running the ball, that is what they did all season and now all of a sudden they were trigger happy with Jimmy G, they would have to get back to the run if they wanted any chance to win the ball game.

The 49ers exploded coming out of halftime on both the offensive and defensive side of the ball. Immediately piecing together a nine play drive for 60-yards that ended with a field goal giving them the lead. The 49ers defense started to get after the quarterback harassing him in the pocket. After a strip sack by Nick Bosa (Patrick Mahomes recovered). The Chiefs were in a bad position, Patrick Mahomes trying to make a play stepped up in the pocket while being tackled throwing it straight to middle linebacker Fred Warner who would intercept the pass.

49ers head coach Kyle Shannahan has had too many memories of comebacks as a former Atlanta Falcons coach. The sequence of 28-3 had a strong impact on him, brushing this aside he told Garoppolo and the offense to end it right then and there. Garoppolo followed orders finding Super Bowl stud Deebo Samuel for 16-yards, he then threw a laser to Kendrick Bourne to move the sticks on a 26-yard pickup and of course a 10-yard pass to Kyle Juszczyk setting up Raheem Mostert for a 1-yard touchdown giving them a two-score advantage.

Patrick Mahomes would struggle on the next drive as speed demon Tyreek Hill would bobble and drop a pass landing in the hand’s of second-year safety Tarvarius Moore. The 49ers once again strayed from the run and were quickly forced to punt the ball back without having successfully taken time off the clock.

Patrick Mahomes finally took his shot down the field, and this one hit as he found Tyreek Hill wide open for a gain of 44-yards putting them in prime scoring position. On third-and-10 from the 21, Patrick threw up a jump ball to Travis Kelce who drew a somewhat questionable pass interference call in his favor setting up a 1-yard touchdown catch by Travis Kelce.
The 49ers once again struggled to take time off the clock allowing Patrick Mahomes (26-42,286,2,2) to do what he does best, make awesome comebacks. He found Sammy Watkins wide open for a 38-yard catch and run. On third down Patrick Mahomes rolled out to his left hitting Damien Williams in the backfield who elongated to reach the pylon. Did he break the plane? I do not know, but what matters is they gave him the touchdown giving the Chiefs the lead.

It was do or die for the 49ers after getting to about mid-field Garoppolo (20-31,219,1,2) went for it all to Emmanual Sanders who had beat his man. With the entire crowd holding their breaths, the ball hit the ground just in front of Emmanuel Sanders, leaving people to wonder what would have happened if he had caught it.

Ultimately the 49ers would not surmount the lead and the Chiefs were crowned Super Bowl LIV champions, a dramatic conclusion to the final game of the centennial season of the NFL. The start of a new dynasty, the end of old school football, the next G.O.A.T., all questions to be answered next season. You know both teams will be back next year. The 49ers have a group of young bucks determined to get back here and the Chiefs have Patrick Mahomes.