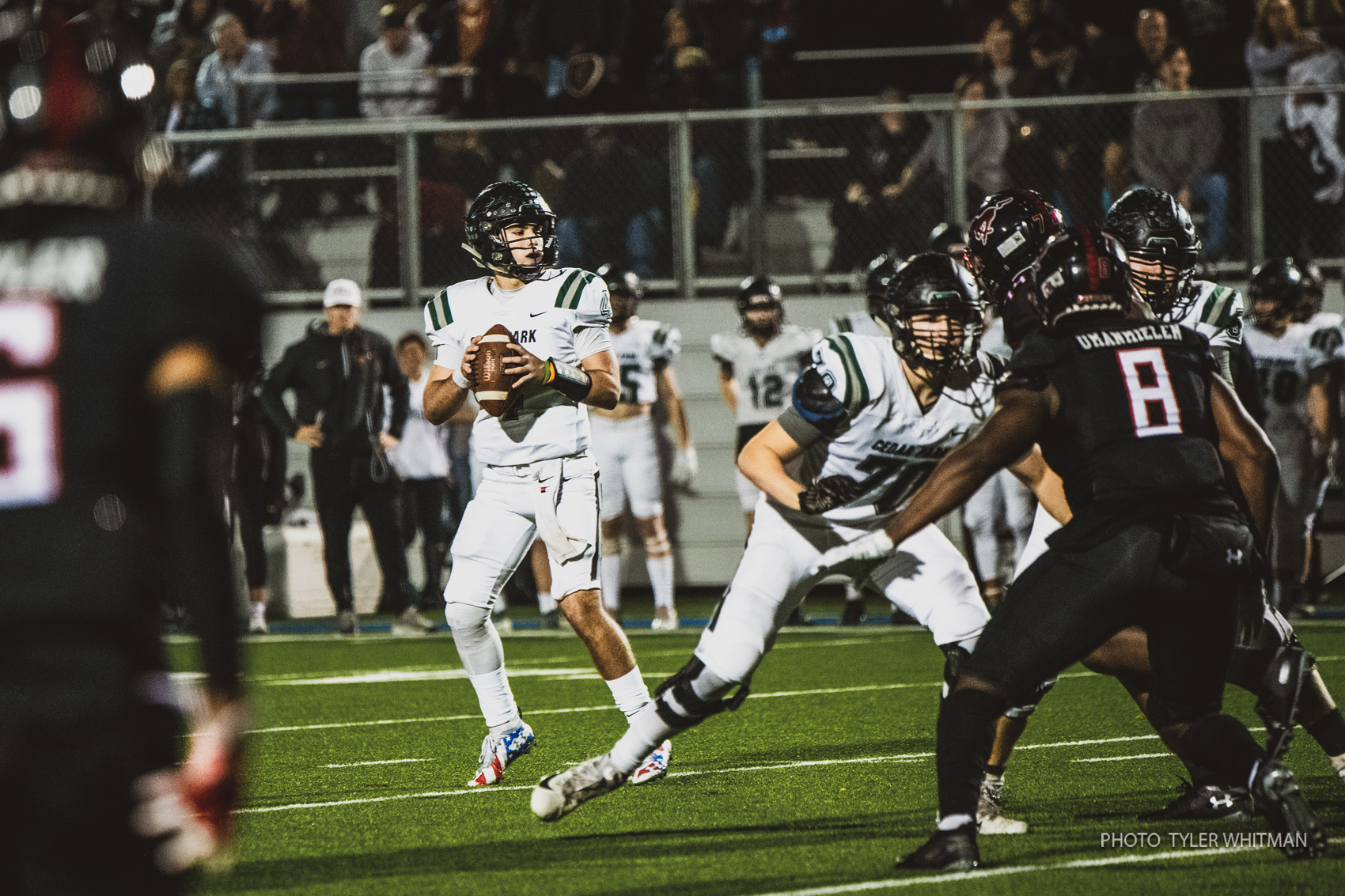 It’s always special when a pair of Austin-area teams meet in the mid-to-late rounds of the Texas High Schools Football Playoffs. So it’ll be a treat for local fans when Cedar Park (11-1) meets Manor (7-5) play in the regional semifinals of the Class 5A Div. I bracket the day after Thanksgiving at The Pfield in Pflugerville at 6 p.m.

The Timberwolves come in wearing a district crown and an 11-game win streak. They rolled through the first two rounds of the playoffs with triumphs over McCallum (49-10) and Friendswood (31-14). Junior quarterback Ryder Hernandez was sensational in both victories, completing 82 percent of his passes for 601 yards with seven touchdowns (six passing, one rushing).

“He’s done a great job of allowing our kids to make plays for him by taking what the defense is giving and being extremely accurate, and just making good decisions with where he’s putting the ball or whether he decides to run or scramble a little bit to buy some more time,” Abseck said. “He’s just really making good decisions, putting the ball on a spot, and the kids are making plays for him.”

Cedar Park’s esteemed “Black Rain” defense is in solid form. With 6-foot-2, 255-pound, senior defensive end Ben Bell (a Louisiana Tech commit) disrupting at the line of scrimmage and 3-year starter Tammer Alzer, a senior safety, making plays on the backend, the Timberwolves have allowed an average of just 12 points and 235.5 yards per game through two postseason performances.

“They’ve played well,” Abseck said. “Friendswood was really, really talented on offense and to hold them to 15 points is really an accomplishment because they’re well-coached and have some really talented kids. The defensive kids are playing really hard. They’re being where they’re supposed to be, doing their jobs, playing their technique and really just taking the coaching that our coaches are giving them, and putting it to use on the field. And really just doing a great job of working together and fitting everything.”

Now comes a rematch with Manor, who Cedar Park beat 49-24 on the last week of the regular season to clinch the outright district title. Hernandez accounted for six touchdowns in that game (five passing, one rushing) as the Timberwolves built an insurmountable 32-point lead at halftime.

“We avoided turnovers on offense and that was (a) huge piece of (that win),” Abseck said. “We had some really nice returns on the kickoff return team, punt return team that allowed us to have a short field. Those were two big critical components. Defensively, we avoided the big plays for the most part.”

Manor, however, has some serious next-level talent. Senior running back Tahj Brooks will be playing for Texas Tech next fall and rushed 163 yards with three touchdowns in the Mustang’s area round playoff win v.s. New Caney Porter. The Mustangs also have 6-foot-4, 250-pound Princely Umanmielen on the defensive line, who is listed as a four-star prospect by most recruiting services.

“They have some extremely talented individuals on both sides of the ball, but the first one that comes to mind is the tailback, Tahj Brooks. He’s an exceptional runner, committed to Texas Tech, and he’s got the full package. He’s got speed and he’s about 220 pounds, so he can run over you or run around you. He’s a tough one and we really have to key on limiting his yards and trying to get a lot of hats to the ball because he’s not easy to bring down,” Abseck said. “But they’re big up front. They really kind of fit each other, being a power-oriented team. They got a big, strong offensive line, and then they do have some really talented receivers that they have to get to the ball to and if they get space they can be really tough. Defensive line-wise, there’s not a better looking defensive line. They got size and speed, and they’ve got some really talented guys on that side, so we got to do a really good job of matching up blocks, staying on blocks, and execute what we’ve been doing, which is make the catches we’re supposed to make, get a little bit of yards after catch and just keep the chains moving.”