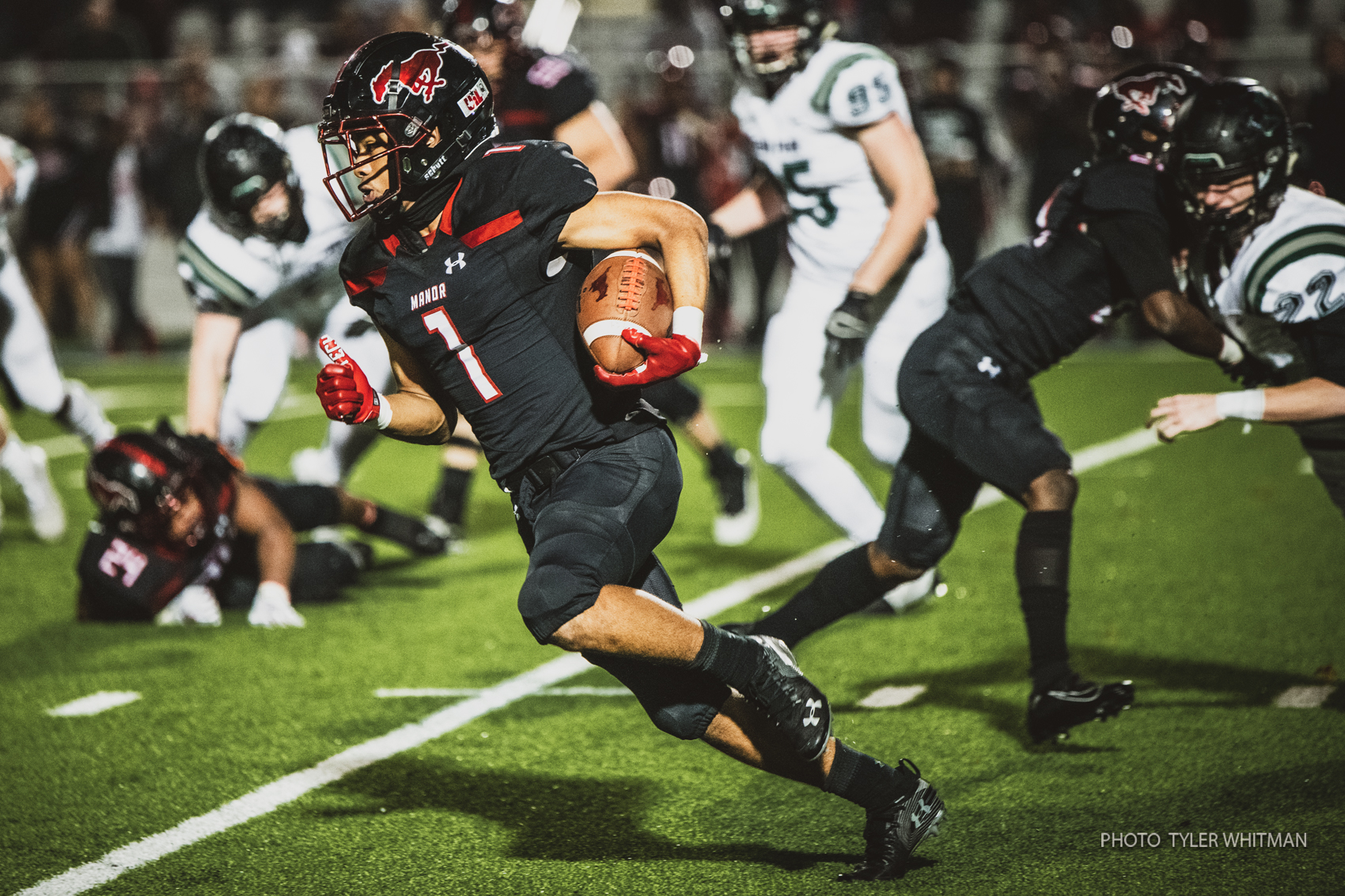 The conditions were harsh, the stakes were high but the will to win was even stronger as a Round Three Regional Playoff game took place in the foggy and damp P-field Stadium between the Manor Mustangs and the Cedar Park Timberwolves. The Wolves were highly favored coming into the game but the Mustangs put that aside and pushed right through them for a 17-14 nail-biter victory.

Cedar Park received the ball to start the game, and came out firing. Junior quarterback Ryder Hernandez completed three passes all to Josh Cameron for 14, 7, and 23-yards. In the dangerous conditions, Hernandez bobbled and fumbled the snap leading to a Manor Mustang recovery.

The Mustangs were determined to do the opposite of Cedar Park as they worked the ground-and-pound game with three consecutive runs. Manor ran themselves straight into a 3 & out and were forced to punt. Luckily for them, they got the ball right back as the Timberwolves receiver Gunner Abseck coughed the ball up for another turnover.

After both teams punted the ball Manor was in possession. Junior running back Lavonte Benford found a seam and exploited it for a whopping 52-yard run placing Manor on Cedar Park’s 23-yard line. The Mustangs than found themselves in a 4&13 situation, choosing not to kick the 42-yard field goal, Manor went for it on 4th down and somewhat predictably did not get it.

After Manor missed a field goal from 42-yards out the Timberwolves were on the attack. Cedar park mounted a strong drive in which they ran it nine times successfully. Running back Jonathan Stockwell lead the pack with explosive runs of 16 and 18 yard carries. Cedar Park would cap the drive off with a 14-yard flip pass to Jordan Cameron for the first score of the game.

Heading into halftime Cedar Park was in the lead but neither team felt satisfied or comfortable with their position. For Manor it was about getting Tahj Brooks going, the Mustangs were a power run offense and they needed to act like it. Brooks had only six carries and 6-yards going into halftime. For Cedar Park, it was simply about holding onto the ball. The last drive looked great but they could not afford to turn the ball over anymore.

Manor followed the advice and immediately started using Brooks. Brooks was lined up all over the place at quarterback, running back and occasionally receiver, no matter where he was he was touching the ball. On their first drive, Brooks carried the ball nine times for 62-yards as well as a touchdown to tie the game up.

Manor’s defense would then stand strong forcing a Cedar Park punt. Mustang quarterback Matt Hill tried to dance in the pocket but could not avoid big-boy Ben Bell who sacked, striped, recovered and ran the ball in for a Cedar Park TD. Manor would immediately go back to what worked for them in Tajh Brooks who had 29 touches and 145-yards from scrimmage. 16-yards away from the endzone Manor employed a little bit of trickery as running back Che Nwabuko threw a 16-yard touchdown pass to Carl Chester.

At this point in the game the energy was high, both teams fighting to stay alive. Once again the Cedar Park offense was unable to get anything going handing the ball over to what was becoming a well-oiled machine in the Mustang offense. Manor once again would drive down the field with ease but fall just short this time. On 4th down quarterback, Matt Hill overthrew his receiver who would have had a walk-in touchdown, giving Cedar Park the ball.

The game was getting down to the wire as Cedar Park was progressing their way downfield. They then found themselves 23-yards away from the endzone in a 4&3 situation. They could risk the field goal at 40-yards or go for it. Head coach Carl Abseck kept the offense on, Ryder hiked it and was immediately brought down in the backfield for a loss.

It was all or nothing, the Mustangs had to get downfield and score. Surprisingly it was not Tahj Brooks that carried them downfield, but Matt Hill who had only completed six passes coming into this drive. He would string together three completions for 10,10 and 20-yards to get the Mustangs in field goal range just like that. It was all up to kicker Yael Sanchez, with the crowd roaring behind him and everything on the line he hit it perfectly through the uprights clinching the win for Manor and sending them to the 4th round of Texas High School Playoffs.

The Mustangs will head onto the quarterfinals where they will square up against Shadow Creek who is fresh off a 35-31 win over Foster. It should be an exciting one as both of these teams have the ability to go all the way.