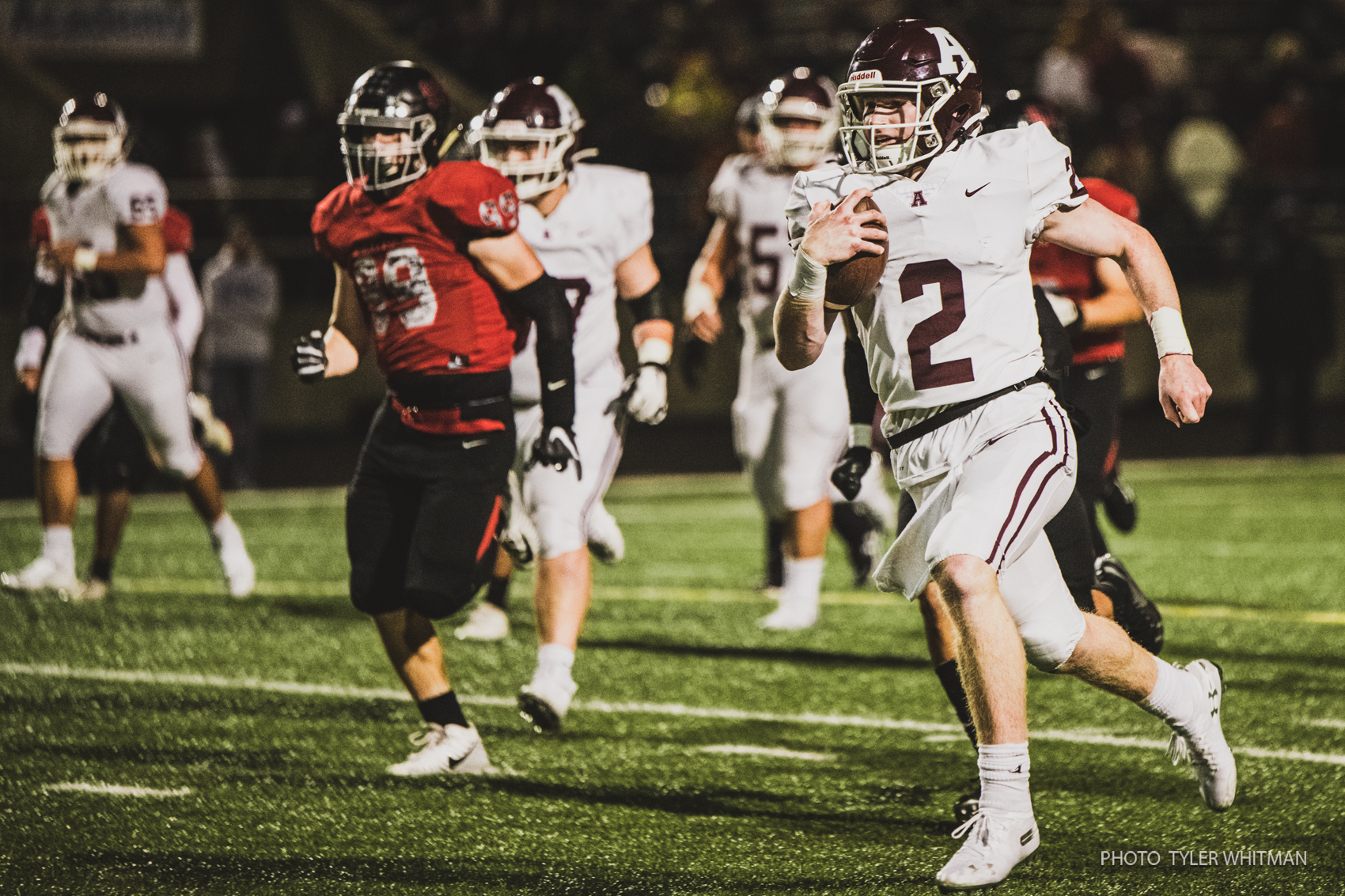 A rivalry for the ages took place in Burger Stadium on Friday night as the Austin High Maroons took on the Bowie Bulldogs in a hard fought matchup. The intensity of fierce competition has been brewing between both teams for decades and this was the time to gain bragging rights. Austin who had not beat Bowie since 2006 came out with an electric determination, while Bowie was looking for a win to keep their playoff hopes alive.

The game was a nail-biter as both teams traded punches back and forth. It came down to the wire in the fourth quarter, Austin High was up by two points, Bowie had a chance to retake the lead but they could not handle Austin High’s defensive line. At long last Austin High prevailed as the new kings of this rivalry beating the Bulldogs with a score of 28-26.

Austin received the ball to start what would be a hard-fought game between both sides. The game started with an 8-yard screen to senior receiver Matt Ruiz who was coming off of a breakout game against Anderson in which he racked up three touchdowns and 138 yards. Backed up due to a holding penalty, quarterback Charles Wright took off on a 35-yard quarterback keeper. Austin was held out of the end-zone and forced to punt after not being able to move the chains.

Recognizing an opportunity Bowie seized the momentum with their first play from scrimmage. Junior receiver Jason Gaines lined up at running back for the first play as he received a screen in the backfield. Gaines somehow bobbed and weaved through the entire Maroon defense as he took it the full 75 yards for a Bulldog touchdown.

On their next drive, Austin was not able to recapture the momentum. On their side of the field, the maroons went for it on 4th and 1. Senior running back Grayson Davis tried to push through the Bulldogs defense, though they were too strong and tackled him in the backfield for a forth down stop.

The Bulldogs put together an incredibly time consuming drive that only resulted in about 30 yards, this was due to multiple penalties and timeouts. Ultimately Austin High held them in the red zone, the Bulldogs sent on the field goal unit for what would be considered an automatic field goal. The Bulldogs found out otherwise as the kick bounced off of the goal post. The Austin High sideline went insane with excitement.

Needing to put together a scoring drive captain Charles Wright took it upon himself to move down the field. On the same play that earned Charles 35-yards, he picked up another 52-yards putting Austin inside Bowie’s 10-yard line. After multiple penalties, Austin found themselves in a 4th and goal situation from the 12-yard line. Going for it Charles Wight dropped back, scanning the field he found Matt Ruiz in the back of the endzone for an Austin High touchdown.

“I told him [Charles Wright] on Thursday that it would be awesome if he rushed for 100yds and threw for 400yds. He is a really good runner and he was able to demonstrate that last week. He is a gunslinger, so his first thought is to scramble and throw the ball. We have been talking to him about using his legs more and he was able to get a lot of positive yardage running the ball. With the defense loading up to stop Grayson, it allows Charles more room to pull the ball and make plays”, said Austin head coach Michael Rosenthal

Bowie continued to sustain long drives but to no avail as Austin forced them to punt. The Austin High Maroons drove the ball down the field and with 28 seconds left on the clock, capped the drive off with a jaw-dropping play. Charles Wright scrambled out of the pocket lobbing up a perfect pass to Nick Anderson who made the miracle catch while tapping his foot an inch from the line for a 25-yard touchdown.

“I think there are a few plays that really stick out in my mind”, said Michael Rosenthal. “I think a lot of our momentum started with some defensive stops early in the game. We gave up the big play early, but then we were able to settle into the game defensively and we did a good job of tackling after that first play. The touchdown to Nick Anderson right before half was big.”
Heading into halftime both teams needed to improve their offense. For Austin, it was about getting senior running back Grayson Davis going. On the flipside, Bowie had to finish drives, they drove down the field but could never cash in.

Bowie took the advice as they drove down the field and scored on a 2-yard touchdown run by quarterback Diego Tello. After missing a field goal earlier things only got worse for the Bulldogs special teams as Austin blocked the kick, safety Carlos Tiemann scooped it and returned it to the house for 2 points.

At this point the Austin sideline was on their feet for the rest of the game. Jumping, cheering, rilling up the crowd, this team was on fire and weren’t about to quit.

Austin capitalized on the 4th down stop as Charles Wright launched a rocket to Nick Anderson for a 20-yard score. Bowie came right back scoring a touchdown but failed to convert on a two-point conversion. Looking to put the game away Wright through a fade up to Johnny Jenkins who climbed the ladder to make a spectacular grab for an Austin High score. Answering the call, Bowie came right back and scored on a quick slant pass to Jason Gaines.

All of the sudden scoring was coming play after play neither offense could be stopped in the late third and early fourth quarters. All Austin needed to do was hold onto their two-point lead. During a broken play, Wright compounded a bad situation with a bad decision as he threw an interception giving Bowie the ball back.

It was 4th and 7 with the game on the line. Bowie had no choice but go for it. Austin brought a three man rush, one of who was defensive lineman Abrion Bordeaux who had been making plays all year. This game was no different as he strip-sacked the Quarterback essentially ending the game.

In the end Austin took the victory in a big rivalry matchup against Bowie. Austin High will face Akins for the final game of their season.
“I am looking to build on our defensive performance against Bowie and have another strong defensive effort. Offensively, we need to run the ball more effectively to keep the defense on their heels”, said Micheal Rosenthal. “The fourth down stops were huge by our defense.”

Bowie has a favorable matchup with the Lehman Lobos this Friday, a win for Bowie could lead to a tie in the division for 4th place with Anderson. Anderson finds themselves in a tough matchup with the Westlake Chaparrals.

Proud of his team Rosenthal said, “It means a tremendous amount to our program. We haven’t beaten them [Bowie] since 2006. We came close a few years ago, but we could never get over the hump. It is a great victory for our players. We have had an up and down year and this was a memorable win for them. It is a game that they will never forget.”