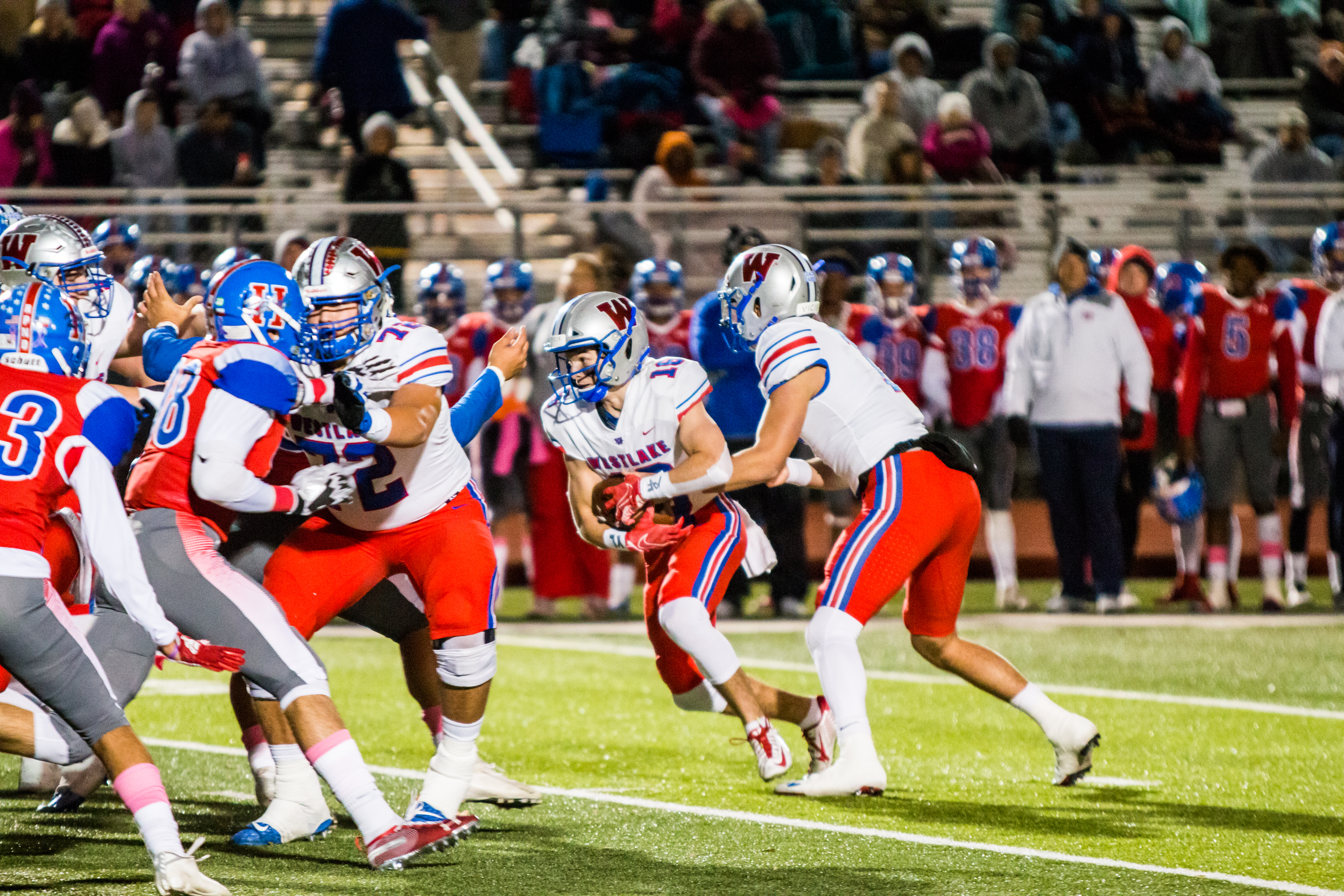 After spending the season’s first eight weeks rotating quarterbacks, Westlake finally handed the keys to senior Kirkland Michaux. The tall righty showed exactly why the coaches put their trust in him by completing 15-of-23 passes for 287 yards with four touchdowns and no interceptions. He also added a touchdown on the ground.

“There comes to be a point where you have to give one of them more reps than the others,” Westlake coach Todd Dodge said of the quarterbacks. “Kirkland has been in our quarterback room since he was a freshman. A lot of people don’t remember, but he was the guy that was a play away during his freshman season, so he’s been around a long time… I thought he played really well against Lake Travis before his injury. He led us on some big-time drives, ran the ball well, was very accurate and he continued it tonight.”

Most of Michaux’s completions went to senior wide receiver Ryan Lindley, a crafty slot-man who finished the night with nine receptions for 111 yards and a touchdown. Arkansas commit Mason Mangum – also a senior – had two touchdowns on his three catches for 62 yards. Freshman Jaden Greenhouse (3 catches, 62 yards, TD) continues to flash talent beyond his years and junior running back Zane Minors (10 carries, 87 yards, 3 TDs) gave the running game a punch that will come in handy as Westlake chases down a state title.

“We’re becoming harder to defend by personnel. We’re spreading the ball around to a lot of different people. Our running game is starting to pick it up,” Dodge said. “We’re getting so many more people involved, not only in the passing game but in the run game. Grey Nakfoor and Zane Minors are really stepping up at the running back position. It’s a nice little 1-2 punch. Our quarterbacks are running the ball well. A lot of the night tonight, even though he made some big plays, they chose to double Mason Mangum and we went in some different directions and spread the ball around, so that’s where we are. We are getting a lot of production from a lot of different people.”

Hays came into the game averaging almost 400 rushing yards a game with its old-school slot-T offense. The scheme is so different from what most kids are used to that it can cause major problems, even for the most talented defenses. Westlake’s resistance, however, was ready for what came at them. Hays mustered only 112 yards on the ground on 2.4 yards per rush. The Chaps also got a blocked punt from senior Jackson Coker and an interception from senior defensive end Austin McClendon deep in Hays territory to set up easy touchdowns.

“Absolutely great preparation. This is a tough team to prepare for because of the slot-T. You only see it probably once a year, and I’m so proud of our defense,” Dodge said. “It’s just about kids just being gap sound, being unselfish. You really have to be unselfish when you play a team like this. The defensive line, we tell them, if you don’t make a tackle, you could play a great game just by holding up, not getting trapped, staying in your gap, getting hats to the ball. In today’s era of spread offenses, our kids are pretty physically. But, boy, you have to really turn it up against a team like this and put your big boys pants on in this kind of physical matchup.”