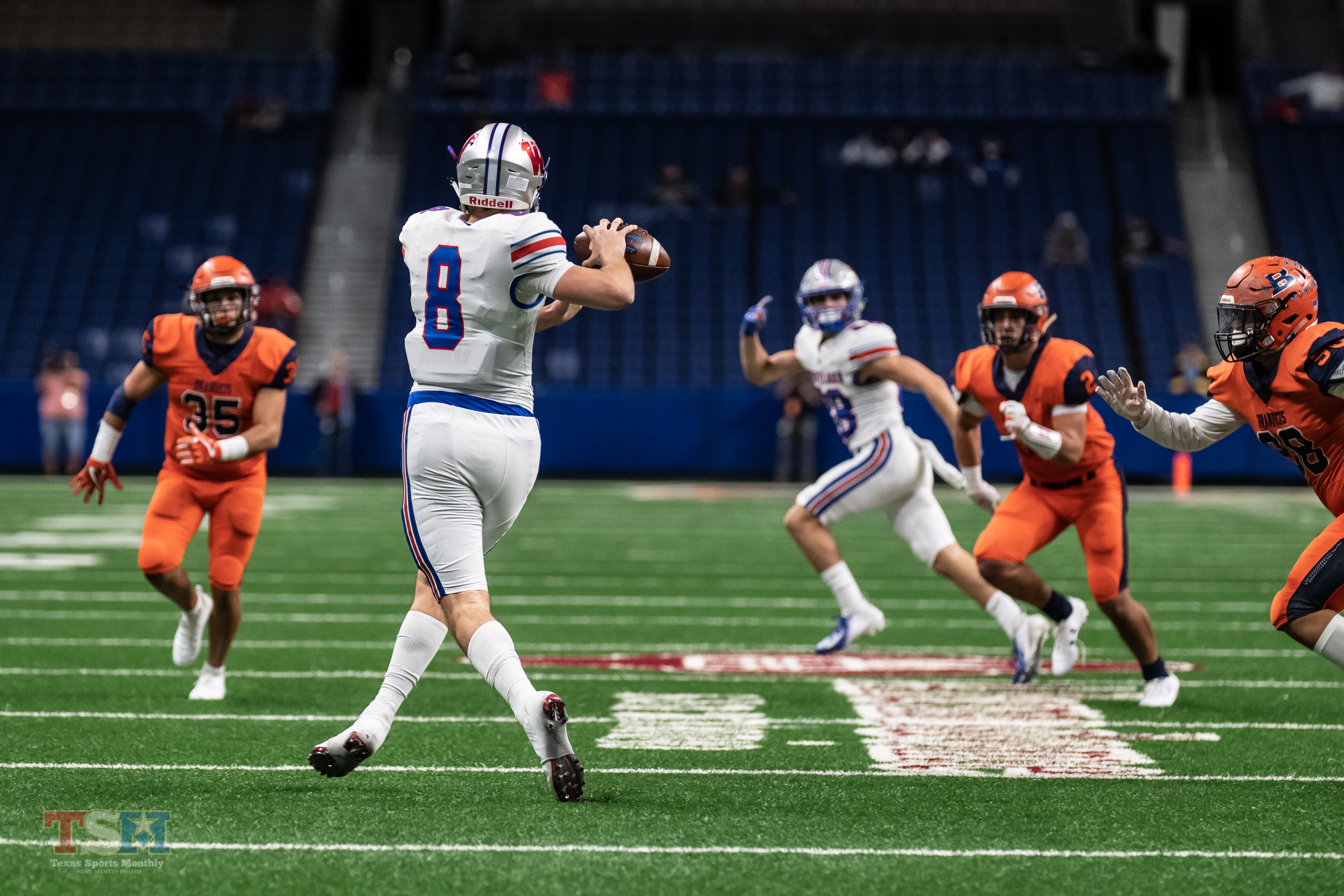 Westlake’s football tradition was built on prolific offenses led by legendary quarterbacks like Drew Brees, Nick Foles, and Sam Ehlinger. But for the last two years, the defense has taken over. That was never truer than on Saturday night in Alamodome, where Westlake held San Antonio Brandeis to just three first downs and 52 total yards in a 26-0 win for the Class 6A Div. II Region IV title in San Antonio.

“It’s what we’ve become accustomed to,” said Westlake coach Todd Dodge. “You don’t take it for granted, though. Our kids have played well all year. Our defensive coordinator (Tony Salazar), I wouldn’t trade him for anybody in the state of Texas. That’s our bell cow. They have been from day one.”

The defensive performance was more needed than at any point this season. Westlake has suffered a rash of injuries on the offensive side of the ball. Senior center Blake Webster, a 38-game starter, got hurt late in the regular season. Senior running back Tripp Graham, who had rushed for 1,266 yards and 15 touchdowns, went down earlier in the playoffs. And senior quarterback Taylor Anderson, who Dodge called “the heart and soul” of the team, fell to the injury bug last week. All three won’t be back.

“They now have to take an extra burden,” Dodge said. “We’re just finding ways to win and riding that defense.”

Westlake used two quarterbacks in place of Anderson. Junior Drew Willoughby started the game and threw a 33-yard touchdown pass to junior wide receiver Mason Mangum on the Chaps’ second drive. He finished 4-of-8 for 54 yards with an interception. But junior quarterback Kirkland Michaux got his chance in the second quarter and played at another level.

Michaux can thank junior wide receiver Jackson Coker for his first touchdown pass. Coker came down with a 36-yard bomb in triple coverage to put Westlake up 14-0 with 8:19 left in the second quarter. But Michaux’s ability to run the ball got the offense going and reminded everyone of the fallen Anderson, who had 771 yards and 10 touchdowns rushing. Michaux rushed for 141 yards and a touchdown on 18 carries while totaling 99 yards through the air on 7-of-12 passing.

Senior Rhett Kelly and sophomore Jax Crockett were in charge of taking on Graham’s workload. Crockett churned out 37 yards on nine carries before injuring himself. Kelly totaled 62 yards on 16 carries while catching four passes for 26 yards. Coker led all receivers with 59 yards on three receptions. Mangum had two grabs for 38 yards. Senior Penny Baker and sophomore Chapel Stewart hauled in one ball apiece, Baker for 19 yards and Stewart for 11 yards.

Brandeis didn’t pick up a first down until its seventh drive, and that possession ended with junior safety Sage Luther picking off his fourth pass of the season. Westlake’s defense got a safety late in the third quarter when senior safety Drew Webster tackled a Brandeis player who had just recovered his own fumble in the end zone for a 16-yard loss. The Broncos’ only first down in the second half was immediately followed by a 10-yard sack from junior defensive lineman Bobby Duncum. Westlake finished the game with nine tackles behind the line of scrimmage.

“This is what we expected,” Dodge said “This is a tough blue-collar team. It’s all about next man up… No one is going to feel sorry for us… This is a real special game. The tradition at Westlake High School long before we ever got here was if you make it to the final four, your picture gets on the wall (in the football offices). That’s a big deal. This was wall week for us. These kids go on the wall.”