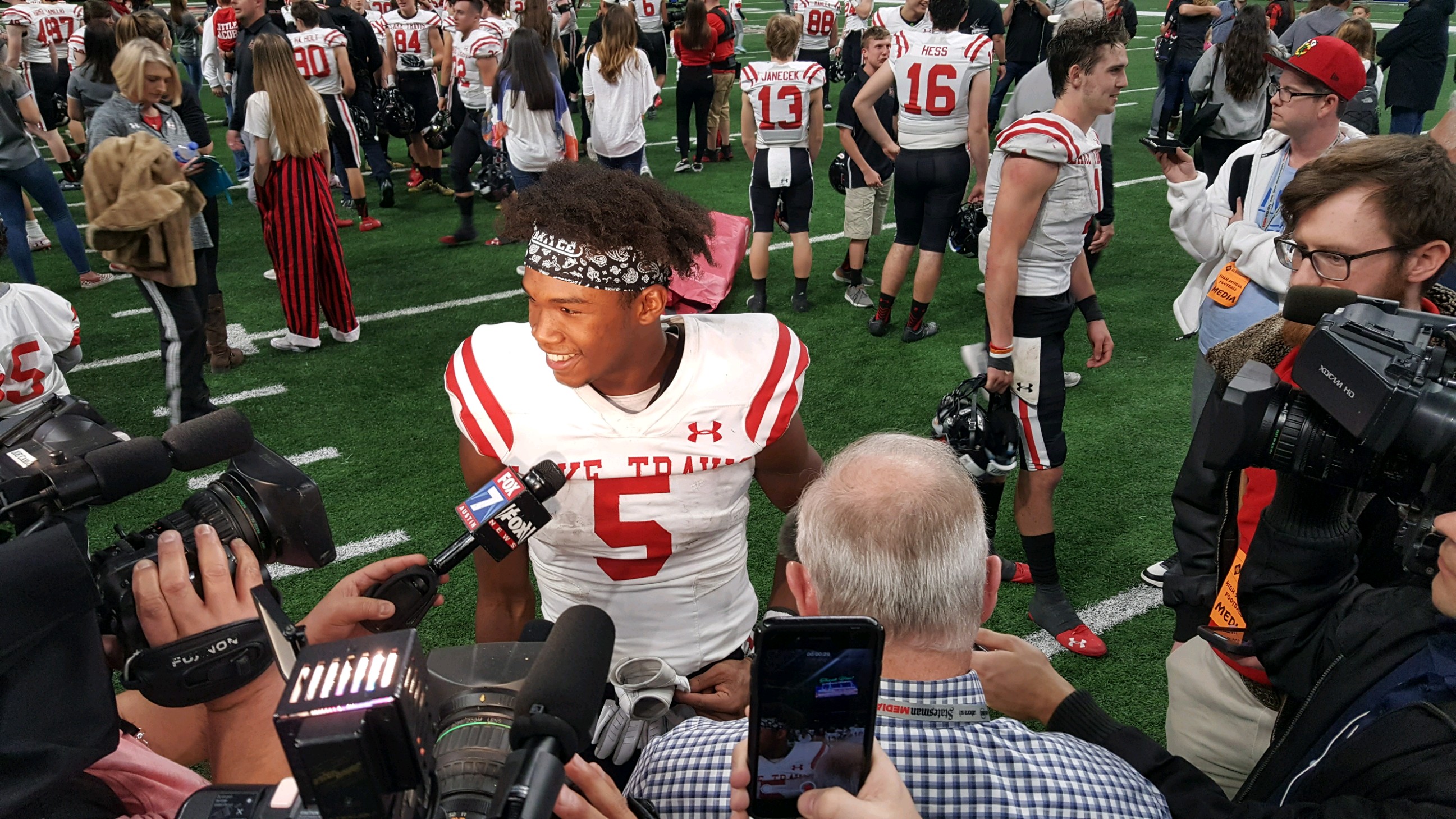 Just like last year’s loss to Lake Travis in the area round, Wilson had a monster game to knock the Rockets out of the playoffs.

Converse Judson is about to have a second straight offseason full of nightmares about Lake Travis senior wide receiver Garrett Wilson. Just like last year’s loss to Lake Travis in the area round, Wilson had a monster game to knock the Rockets out of the playoffs. The Army All-American had eight receptions for 139 yards and three touchdowns to help guide the Cavaliers past the Rockets 38-21 in the Class 6A Div. I Region IV Final Saturday at the Alamodome in San Antonio, TX.

“Garrett’s incredible,” said Lake Travis coach Hank Carter. “He fought today and he’s not 100 percent. What a warrior he is. He doesn’t get enough credit for the type of competitor and warrior that he is.”

Wilson helped aide junior quarterback Hudson Card in a game where he was getting pressured from all directions. Converse Judson’s defensive line, which features talent like five-star Texas A&M commit Demarvin Leal, had Card on the run. But Wilson went Spiderman on his defender for a 16-yard touchdown grab in the second quarter and got behind the defense for 60 and 29-yard scores in the second half. Junior Kyle Eaves hauled in seven balls for 121 yards with a 64-yard score, and Card ended the game with four touchdowns and 311 yards on 19-of-35 passing.

“That was as tough as front as I would imagine we’ll see,” Carter said. “Those guys were incredible and they got after us some. They really kept him bottled up. Hudson’s a great athlete… and he didn’t have many times he got loose at all. I’m proud, especially in the second half, how Hudson settled down and made some throws. Our offensive line battled all night. It’s hard to have a ton of success against them because of their physicality… That’s how it’s going to be. Everybody we’re playing is going to have Division I guys all over the place, but we have some too.”

Lake Travis got a nice break before the half. Converse Judson drove the ball to the Cavaliers’ one-yard line with two seconds left. But instead of taking the chip shot field goal, Judson head coach Sean McCauliffe decided to go for the touchdown. The ensuing handoff was botched, however, which kept the score even at 14 entering the break and elicited a deep sigh of relief from the Lake Travis sideline.

The Cavs took that positive energy into the locker room, and then came out and outscored Judson 24-7 the rest of the way. Following the 60-yard touchdown pass from Card to Wilson, junior defensive back Copeland Gothard intercepted a tipped pass on the sideline, which set up a 37-yard field goal from sophomore kicker Hays McCannon. The teams traded a pair of touchdowns to start the fourth quarter, and then junior Mauricio Trevino forced a fumble on a Judson kick return. Lake Travis recovered and Wilson caught his final touchdown pass with 6:49 to go to put the icing on the cake.

“(The final play of the half) was big. You never know how that’s going to pan out. They gave us a little bit different look. I’m proud of my kids. I called a timeout and the kids adjusted to it,” Carter said. “We just made some adjustments (after halftime). I think our kids settled down on both sides of the ball and just played a little bit cleaner and a little bit sharper. We made a lot of mistakes in the first half and we cleaned up some of it. We made some plays. There was some close plays. One of them (Eaves’ 64-yard touchdown reception) could’ve been a knockdown (for a) incomplete pass, turned into a touchdown.”

Special teams played a big role in Lake Travis’s first touchdown. Card placed a beautiful punt near the goal line that was downed at the three. The defense forced a three and out and Eaves provided a solid return to the 30. A facemask penalty tacked on 15 yards to put the Cavs in the red zone, and sophomore running back Weston Stephens dashed for a 15-yard score to knot things up at seven.

“You got to play all three sides of the ball,” Carter said. “You got to play offense, defense, and special teams if you want to play championship level football and that’s a championship level team we just played… I’m proud of our bunch. Judson is a great program. We knew it’d be a battle. I’m excited about the way our kids are playing. It’s awesome. I’m very, very fortunate to be sharing it with such an awesome group of kids. Our coaches, our fans were awesome today.”