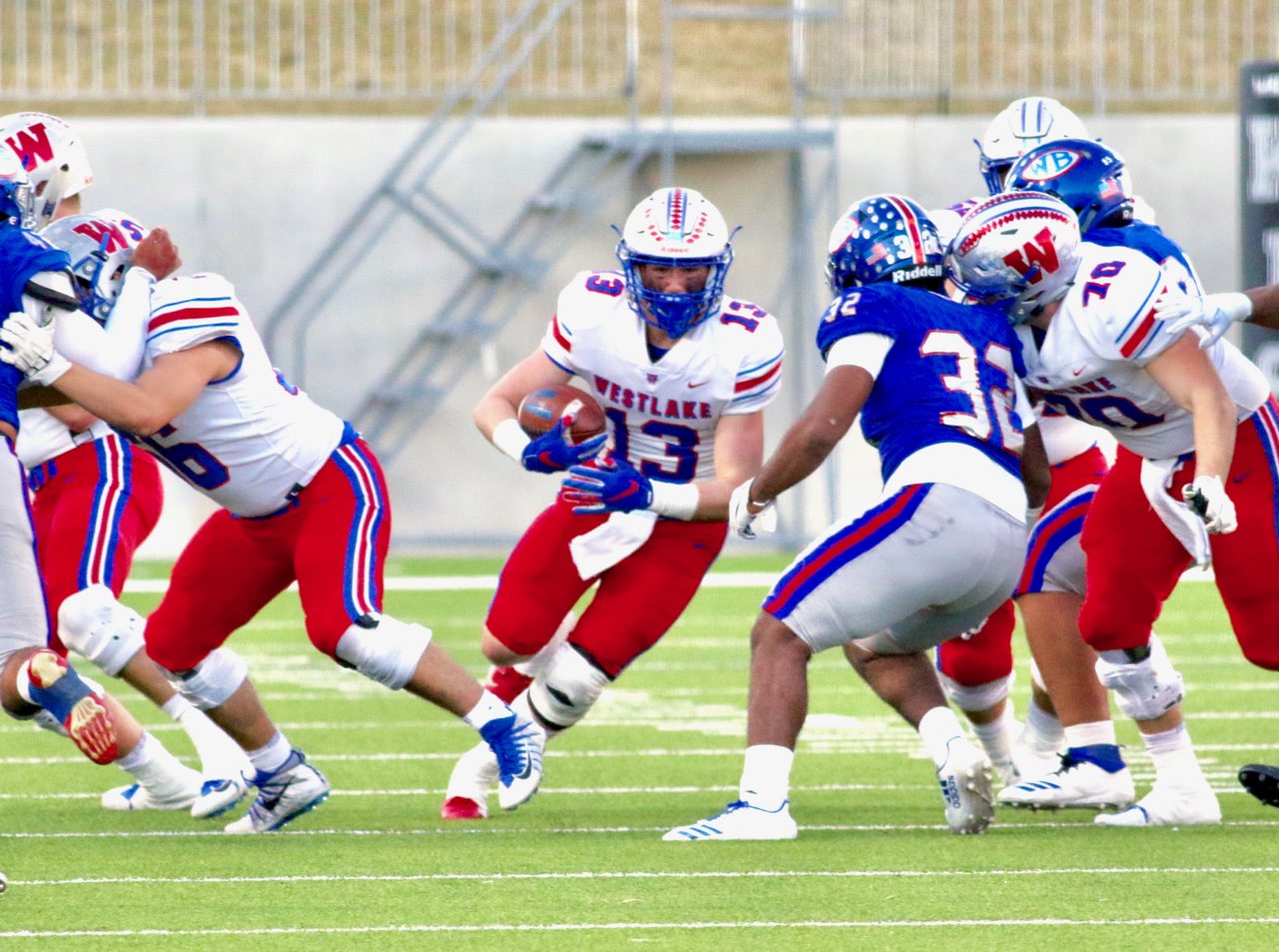 Westlake coach Todd Dodge’s impassioned postgame speech said it all. After his team’s season came to an end with a hard-fought 35-30 loss to Beaumont West Brook in the Class 6A State Semifinals at Legacy Stadium in Katy, TX, Dodge got emotional with his boys as he expressed the emotion he felt about the heart and toughness they played with. Despite missing key offensive starters and trailing by double-digits most the game, the Chaps came back and had the ball with a chance to win before getting stopped on fourth down at midfield in the final minute.

“They’re just a blue-collar, hard-nosed bunch of kids that no matter what the circumstances are don’t think they should lose,” Dodge said. “Just very, very proud of this bunch. This one will hurt, but we’re not going to let it take our joy away.”

West Brook had shown a penchant for making big plays all season and that didn’t stop against a Westlake defense that came into the game allowing only 7.5 points per game. The Bruins scored three touchdowns of at least 66 yards to take a 25-10 lead into halftime. The first was by the defense as junior defensive end Markel Clark and senior safety Darrel Hawkins Jr. combined to force a fumble that was recovered by senior safety Daniel Coleman and returned 70 yards for a touchdown.

Westlake answered with a 29-yard touchdown pass from junior quarterback Kirkland Michaux to senior wide receiver Penny Baker on the next drive. But Bruin senior running back Robert McGrue broke free for a 68-yard score on the second play of the second quarter, and a few minutes later, senior quarterback La’Ravien Elia hit junior wide receiver Thaddeus Johnson on a quick slant, and Johnson bounced off a tackler and darted to the end zone for a 66-yard touchdown. The Elia-to-Johnson connection was on all day, as Johnson hauled in eight passes for 205 yards.

“Tonight for a three-hour window, we ran into a team that was better than us for this three-hour window, to be honest with you,” Dodge said. “Hats off to West Brook. They did what they needed to do. They put their athletes on the field and made plays… What a great job they did. Tons of speed and good luck in the state championship.”

Michaux, who was making his first career start, struggled early on. He completed just 5-of-15 passes for 88 yards while taking four sacks and losing the fumble that was returned for a touchdown in the first half. But the second half was a different story. Michaux went 8-for-13 for 138 yards with two touchdowns (one rushing, one passing), no turnovers and just one sack taken after the break. His top targets were Baker, who finished with five catches for 96 yards including his first half score, and junior Mason Mangum, who hauled in five balls for 105 yards and 38-yard score near the end of the third quarter.

The Bruins continued making big plays in the second half. They had three of 40 yards or more, including a trick play where senior wide receiver Deonte Thompson got a lateral and launched a 46-yard touchdown to a wide open McGrue to make it 35-17 late in third quarter. But Westlake put the clamps on West Brook’s last two drives. The Chaps got a three-and-out following Mangum’s 38-yard touchdown catch, and then senior linebacker Jake Ehlinger checked in on offense and scored a four-yard run to cap a nine-play, 67-yard drive that made it a single-digit game for the first time since the opening moments of the second quarter.

West Brook got all the way to Westlake’s five on its final drive, but junior defensive back Leo Lowin chased down junior Jakobi Holland for a 14-yard loss and Ehlinger made a nine-yard sack to knock the Bruins out of field goal range. After a fourth down stop, Westlake got the ball and drove to midfield before stalling out. When Michaux’s fourth down pass fell incomplete, West Brook’s sideline and crowd roared with euphoria, while the Chaps’ rampant energy whooshed away. Dodge, however, made sure to pick their heads back up after the game. West Brook will play for its first state title since 1982 Saturday at AT&T Stadium.

“We settled down (after the first half),” Ehlinger said. “At first we got caught off guard, got on our heels. But we stepped it up. We knew that we had to leave all that we had on the field because it could’ve been our last time and it was. We stepped it up and I feel content with how we played in the second half… It just proves what type of team we are. We’re a family. We told ourselves that we wouldn’t feel non-content with ourselves. We knew we would leave it all out on the field and that’s what we did. We have less points than they do at the end of the day, but it is what it is.”

And Then there were Three
Liberty Hill Falls to La Vega