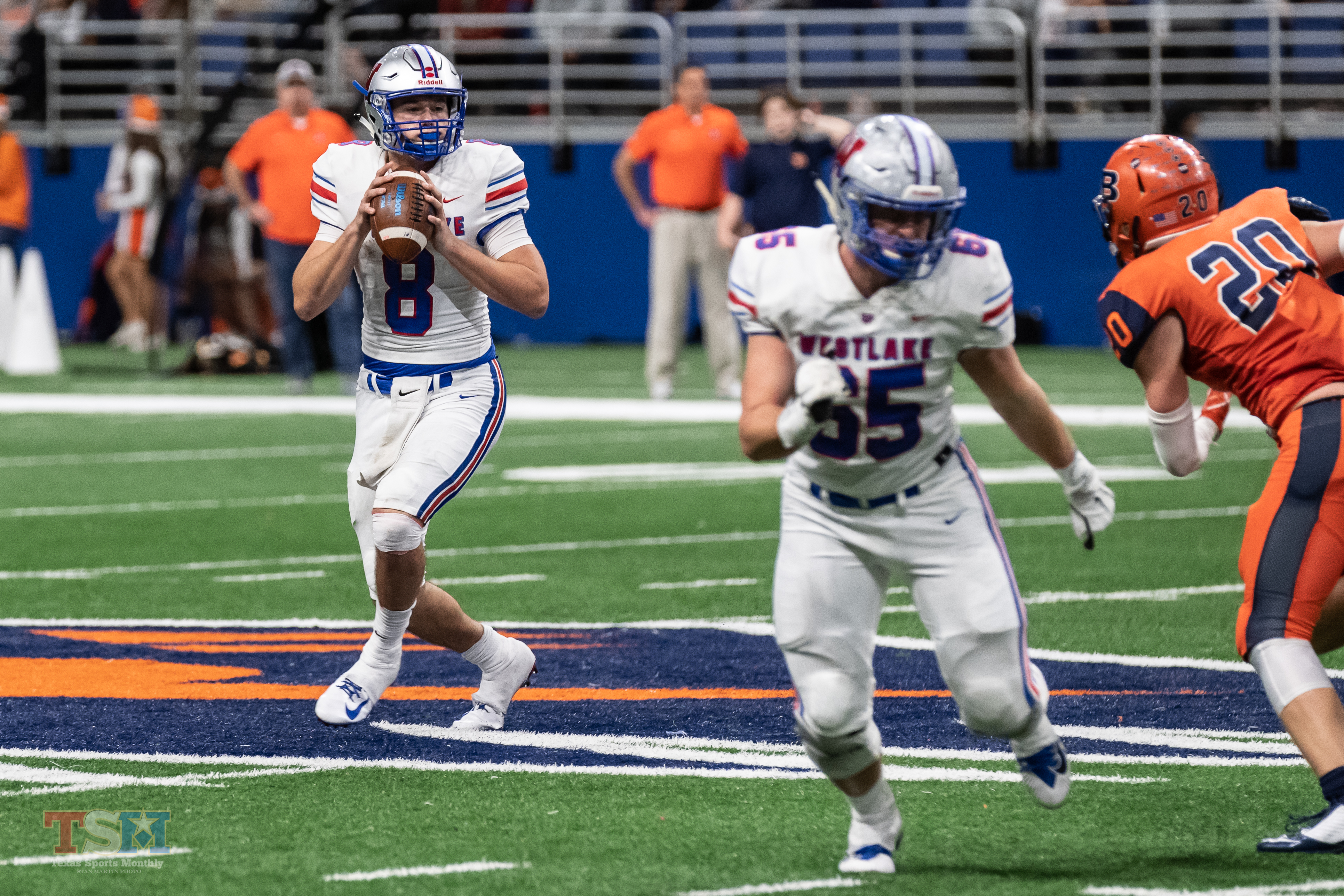 And Then there were Three

And Then there were Three

Three Austin-area teams have been carving up opponents like a Christmas ham so far in the 2018 UIL football playoffs.

And each one is doing so in its own unique way.

Westlake, Lake Travis and Liberty Hill have all reached the state semifinals this week and all three look like legitimate title contenders. Here’s a look at how every squad has steamrolled its way into the final four.

Doing it with defense

The Chaparral’s (13-1) are the champions of District 25-6A and proud owners of an impressive 44-14 victory over Lake Travis in the regular season. Since the Class 6A Division II postseason began, Westlake’s scoring is down from 47.3 points per game to 32.8 points per outing,but it hasn’t mattered yet.

That’s because the Chaps are smothering opposing offenses, having just recorded back-to-back playoff shutouts for the first time in program history. Last week in the regional title game against San Antonio Brandeis, Westlake saddled the Broncos early and held them to a measly52 yards of offense and three first downs during a 26-0 victory.

Of course, there’s a reason the Chaparrals aren’t lighting up the scoreboard as much as they did through the first 11weeks of the season. In addition to an increase in the quality of its opponents, injuries have plagued Westlake recently.

Quarterback Taylor Anderson and running backs Tripp Graham and Jax Crockett have all been sidelined, while center Blake Webster was lost to a season-ending injury more than a month ago.

Still, behind a disciplined and tough defense, the Chaps have built a 12-game winning streak that includes a hard-nosed 28-14 win over a physical Schertz Clemens team in the bi-district round and a 49-7 romp over San Antonio Brennan in an area matchup.

The only thing standing in the way of a trip to the 6A-II championship game is a contest against Beaumont West Brook(12-2) this Saturday at 4 p.m. at Legacy Stadium in Katy.

Opposing defensive coordinators? Not so much.

Wilson gave Judson fits last week during a38-21 triumph in the Region IV-6A Division I title game that saw the wideout make eight grabs for 139 yards and three touchdowns. Two games prior to that,the recent Army All-American torched San Antonio Madison to the tune of 169yards and three total scores on another eight grabs as Lake Travis waltzed to a56-35 area playoff win in New Braunfels.

Wilson’s reemergence helped the Cavs banish the Rockets for a second consecutive season. It was key to the game plan, as Judson has one of the better defensive lines in the state of Texas, including stud DE/DT DeMarvin Leal — a Texas A&M commit.

Junior quarterback Hudson Card, a Texas pledge, was still able to pick apart the Rockets’ secondary and finished with311 yards and four scores, with one TD going to Kyle Eaves.

Card even tied the school record for most TD passes in a single game (7) against Weslaco, joining Garrett Gilbert and Matthew Baldwin in that category.

The Cavaliers have now booked a date with Galena Park North Shore (14-0) this Saturday at 2 p.m. at NRG Stadium in Houston.

The Panthers (12-1) and their vaunted Slot-T rushing attack has to bring a tear to the eye of any football fan who longs for the days of “3 yards and a cloud of dust.”

Except in Liberty Hill’s case, it’s often more like “30 yards and a hail of artificial turf pellets.”

Running back Kyle Harrison is always a threat to take the ball the distance, as the 5-7, 150-pound senior has rushed for an absurd 2,607 yards and 37 touchdowns. As a team, the Panthers have kept the ball on the ground 681 times for a total of 6,601 yards.

In the age of spread offenses and air raid attacks, Liberty Hill has thrown the ball a grand total of 32 times this season. However, that doesn’t mean that head coach Jeff Walker’s team won’t chuck it in key situations.

In fact, during last week’s 35-17 victory over La Vernia in the Class 4A Division I regional final in San Marcos,quarterback Jacob Cearley caught the Bears hibernating on a 61-yard TD pass to Harrison that helped the Panthers rally from a 17-14 fourth-quarter deficit.The pass sparked a string of 21 unanswered points in the final stanza.

Just don’t expect to see Cearley lining up in the shotgun anytime soon.

The Panthers’ path to the Class 4A-Isemifinals also includes a 35-21 win over Sealy in the regional semifinals and triumphs against Bay City (62-14) and Gonzales (56-28) in the opening two rounds.

Harrison and company will look to keep churning out rushing yards and moving the chains this Friday against unbeaten Carthage (14-0) at the Berry Center in Cypress. Kickoff is set for 7:30 p.m.