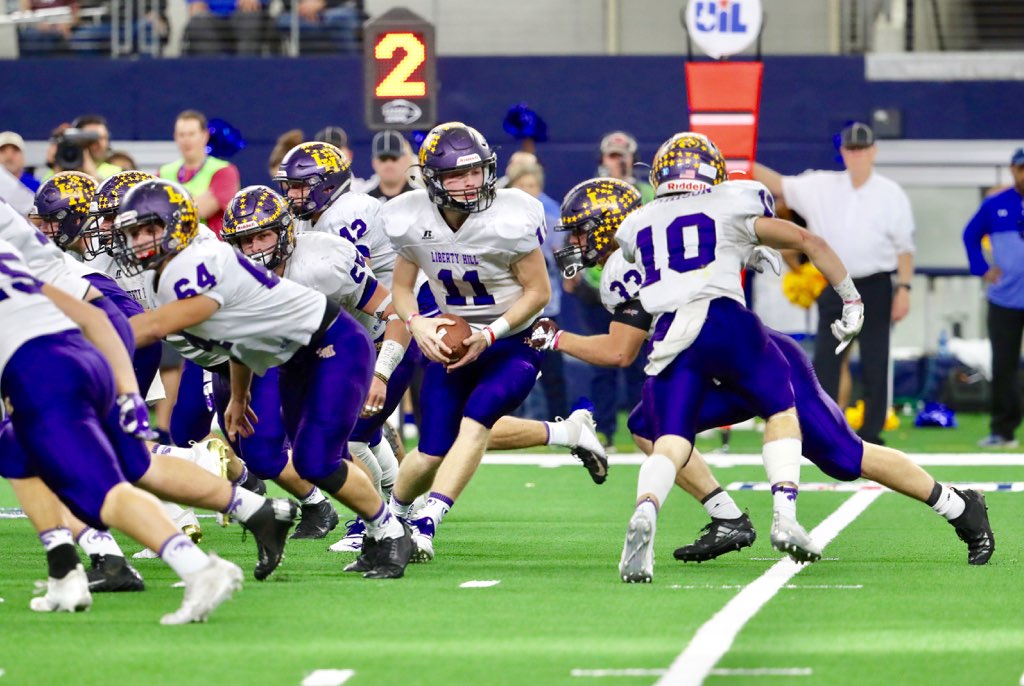 Waco La Vega has had Liberty Hill’s number for some time, and that was the case again in the Class 4A Div. I State Championship at AT&T Stadium in Arlington, TX. The Panthers played evenly for most the game but came undone during a disastrous third quarter in a 35-21 loss, their fifth straight defeat to the Pirates in the last four years.

“(The losing streak to La Vega) plays in the back of your head. Even as an adult it does,” said Liberty Hill coach Jeff Walker. “But I felt confident coming in. We felt like we had the team that could beat them this year, but they’re familiar with us. We got up on Sealy and Carthage and some of those guys because they hadn’t seen us offensively and it’s hard to prepare for us in three days, but (La Vega) had seen us… They’re familiar with us. We’re familiar with them. They just made big plays and we didn’t.”

The decisive third period got off to an ominous start with La Vega senior Donta Stewart returning the second half kickoff 94 yards for a touchdown. It only got worse from there. La Vega scored on the second play of its next possession when junior wide receiver Malachi Wright caught a short hitch route, juked his defender and raced down the sidelines for a 90-yard touchdown.

Liberty Hill drove down to La Vega’s 15 on the ensuing drive but fumbled a handoff that was recovered by senior defensive lineman JaCorrey Coaster to extinguish the threat. Five plays later, the Pirates struck gold again as Wright got behind his defender for a 61-yard yard touchdown reception. Wright won offensive MVP honors with four catches for 172 yards and those two game-breaking touchdowns. In the third quarter, La Vega scored 21 points on just seven plays from scrimmage.

“I told the guys all the time earlier in the year (that) late in the season (and/or) playoffs, you have to win turnovers, you have to win special teams and you can’t give up big plays, and we (lost) all three in that quarter,” Walker said. “Momentum is a big part of all sports… At halftime it’s 7-7 and we thought it’s an even football game and it’s gonna be a two-quarter game. Let’s go out and fight, and we kicked off and they returned it (for a touchdown). I think it took a little wind out of our sails.”

Looking at the final stats, you wouldn’t think Liberty Hill lost by double-digits. The Panthers racked up 15 more first downs, almost doubled the time of possession and out-rushed the Pirates by 154 yards with their famed slot-T offense in a game that was expected to be decided on the ground. Senior running back Kyle Harrison capped his stellar career with 114 yards and a score on 27 carries, and in the process set a new Austin-area single-season rushing record with 2,875 yards.

“It sucks to lose but my team made it here and we did leave a legacy,” Harrison said. “That’s also an award for my lineman, too, because they’re the one getting me there. All year it’s been them. That’s pretty cool but it’s not really what I was thinking. I was thinking, come in and get the job done, but it’s pretty cool for me and my lineman… We didn’t get it done, but we got here and not very many teams got here like us, and it’s pretty fun playing in Jerry World.”

Liberty Hill’s defense forced punts on each of the Pirates’ other three first-half drives and the offense evened the score with a four-yard touchdown run by Harrison on the first play of the second quarter. That score was set up by a rare pass completion, only Liberty Hill’s 18th of the season, where senior Kristian Taggart caught a throwback screen and followed his blockers for 18 yards and a first down on third-and-8.

The Panthers got back within shouting distance when junior quarterback Jacob Cearly scampered for a nine-yard touchdown with 8:48 remaining to cap a 13-play, 65-yard scoring drive. But one last home run, a backbreaking 43-yard touchdown run by La Vega senior running back John Richards with 6:59 to go, extended the lead back to 21 and put the game away.

“We had a good season. We had a lot of ups and downs. We had a lot of injuries. We fought and we battled kind of like we did today,” Walker said. “I’m just proud of them. I’ve been proud of them all year long. They’ve given me everything. It’s a group that when they don’t win they apologize to me and say ‘I’m sorry, coach.’ This program has never been about me and never will be about me, and it kind of hurts me when they say that but I’m just proud of them. They put in the time, the effort, the energy. These guys didn’t miss a day in the summer. They come every day. They pay a price and you’d like to see them get rewarded and of course, we didn’t get the reward today.”