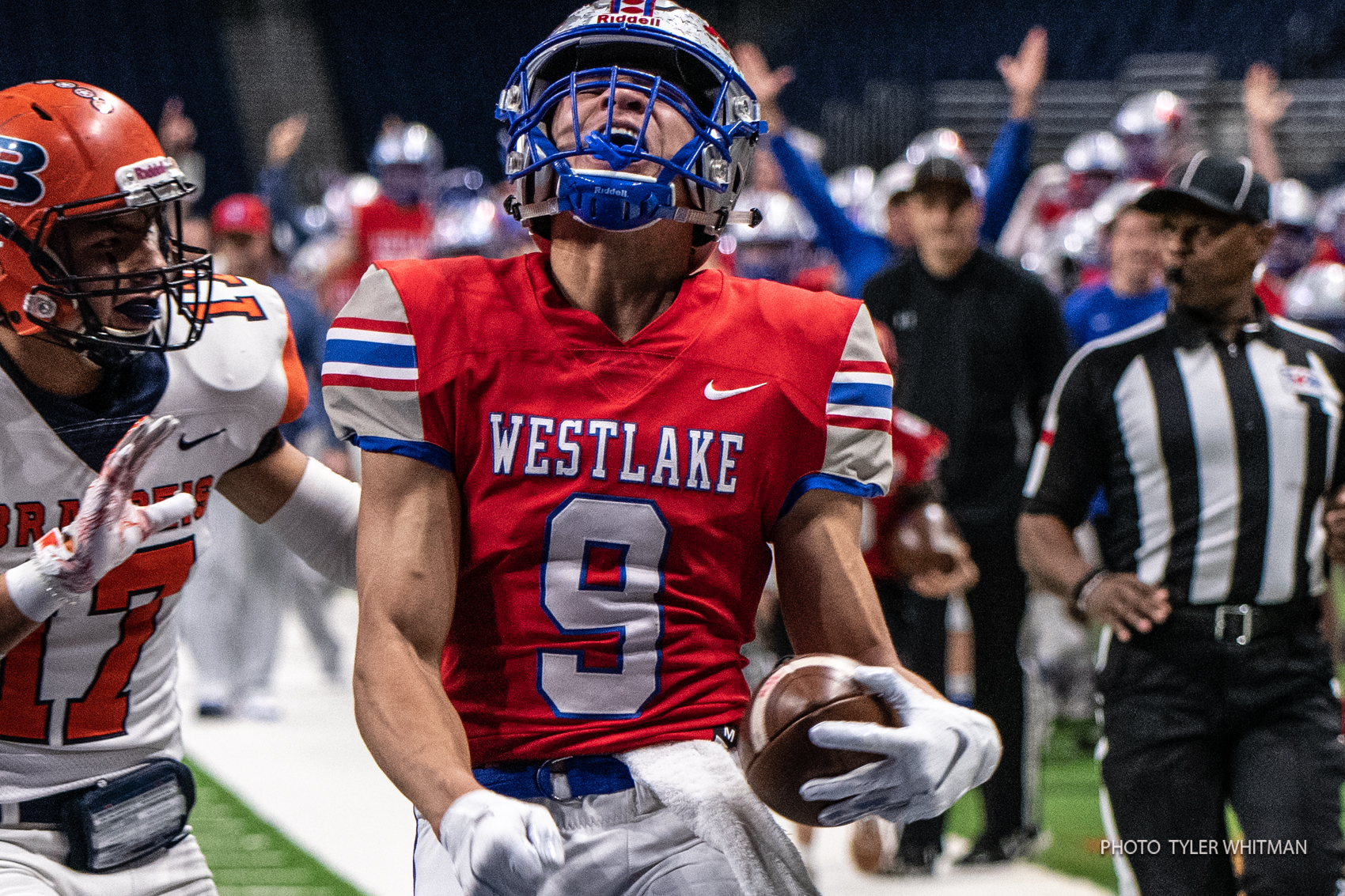 Eight teams entered the Texas high school 6A Division II Regional playoffs, only four teams emerged with a shot at the state championship. The Alamodome was where the Westlake Chaparrals took on the Brandeis Broncos in what turned out to be a one-sided affair as the Chaps dominated in a 42-14 win over the Broncos and took their next step towards a ring.

Westlake received the ball to start the game, hoping to repeat last year’s victory in which they over powered Brandeis 26-0. It was a shaky start for Westlake after quarterback Kirkland Michaux’s first pass was nearly intercepted. On third down receiver Jackson Coker threw the ball on a reverse play to Mason Mangum who dropped it, luckily for them, Ryan Lindley was in the right place at the right time as he caught the tip for a 33-yard gain. Kirkland Michaux threw a fade to 6’4″ freshman Jaden Greathouse who elevated over the defender to make an epic 21-yard touchdown grab.

Unlike Westlake, Brandeis was looking to change the result of last year’s game, starting with an explosive kick return the Broncos would be positioned at Westlake’s 34-yard line. After six moderate gains and a holding penalty, the Broncos were on the 18-yard line. Star running back Corion Holmes was lined up at tight end and for good reason, as Holmes sneaked past the defense finding himself wide open in the end zone for the touchdown.

Westlake would get the ball back and look just as dominant. Brandeis may have them in a 3rd & long but Kirkland Michaux and company would always find a way to move the chains. A great example is 3rd & 14 in which Michaux found Jackson Coker for 16-yards to keep the drive moving. The Chaps would than find themselves on the 1-yard line and the call was obvious, quarterback keeper, Kirkland Michaux powered his way in for Westlake’s second touchdown.

After an Austin Mcclendon sack Brandeis would be forced to punt the ball away to the dangerous Chaps offense. Kirkland Michaux was getting it done on the ground as he rushed for 49-yards at this point. He was basically a human bowling ball knocking over the Broncos like pins. The Chaps offense would not get a strike or a spare that drive in fact they had a gutter ball as they missed the field goal.

The next Westlake possession was similar to the second and dissimilar to the third. Jaden Greathouse would once again make his presence felt with an 18-yard catch, in the first two-quarters Greathouse had four catches for 55-yards and a touchdown. This helped set up Kirkland Michaux for yet another 1-yard touchdown run moving the lead to 21-7.

Heading into halftime Westlake’s offense was looking good and in my opinion had one standout, Jackson Coker. Coker is essentially playing the Taysom Hill (Saints quarterback) role on this team. Coker totaled 109-yards throwing, running and receiving the ball. One player the Chaps needed to get involved was junior running back Zane Minors who had four carries up until this point for 18-yards.

Brandeis would get the ball to start the second half and they were looking for any glimmer of offense they could find. Junior quarterback Jordan Battles sparked that with a 36-yard run that would be put to waste as Brandeis missed the field goal. Westlake now in possession took my advice and feed the beast in Zane Minors.

Minors would get the first four touches on the drive and earn 17-yards. Much like Brandeis, Westlake would not be able to put up any points after turning the ball over. With reinvigorated energy Brandeis was fired up, so was Westlake’s Bobby Duncan as he would strip Battles of the ball and Taevin Brown would recover for Westlake.

Kirkland Michaux (who would be taken out later in the game) threw for 153-yards and a touchdown while completing 17/24 passes, Michaux also added 50-yards on the ground and two touchdowns. Zane Minors would rush for 66-yards on 13 carries. Ryan Lindley had 93-receiving yards, Jaden Greathouse totaled 93-yards.

In the end, Westlake played very well on both sides of the ball. They will face a formidable opponent in the State Semi-finals round that has been somewhat challenging in recent years. Westlake will look to change that narrative as they face the winner of the upcoming Katy Taylor/Cy Creek game next Saturday in Waco.