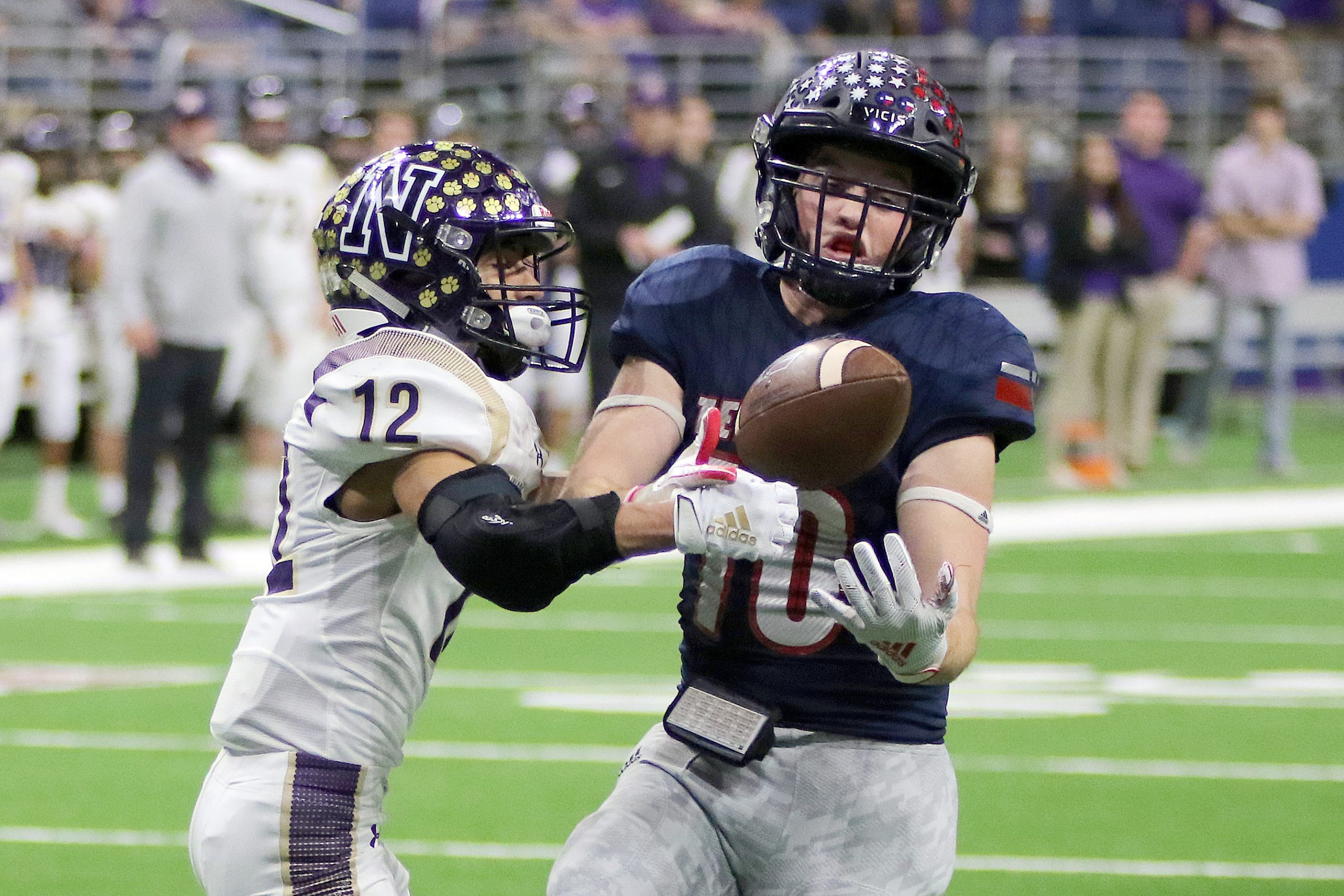 During the Texans’ 42-14 loss to district rival Navarro in late October, quarterback Cooper McCollum was relegated to the sideline with an injury that took all of the air out of Wimberley’s proverbial balloon.

In the rematch, McCollum showcased what he was capable of doing in four full quarters of action.

The Texans (11-3) flipped the script on Navarro at the Alamodome in San Antonio, as McCollum was nearly perfect while directing a 42-12 rout in the Class 4A Division II state quarterfinals. The senior signal caller tossed five touchdown passes to lead an early onslaught that buried previously-unbeaten Panthers (13-1) from the outset.

“We jumped out on them early and then just kind of kept them at arm’s length and made them chase us all night, which is something that they don’t like to do,” Wimberley head coach Doug Warren said.

McCollum exited the first meeting against Navarro with the Texans holding a 14-0 lead, but the Panthers used a string of 42 unanswered points to run away with the victory. Navarro later sewed up the District 13-4A-II championship.

However, Wimberley looked nothing like an underdog in the Region IV-4A-II title game and was able to light up the scoreboard early and often.

McCollum took to the air and found Christian Marshall for touchdown strikes of 21 and 31 yards in the opening stanza, but the senior quarterback wasn’t done there. He added a 6-yard TD toss to Josh Limely to close out a dominant 21-0 first quarter for the Texans.

“It was just us taking advantage of opportunities,” Warren said. “We’ve thrown the ball fairly well all season and the first time against those guys we lost (McCollum) to injury, so that kind of changed the complexion of the game a little bit. It was just a matter of us executing our offense to its potential.”

Navarro stopped the bleeding when Johnny Alegria tallied an 11-yard rushing score prior to halftime, but the Texans’ defense held strong throughout the third period to protect a 21-7 lead.

Marshall then threw a TD pass of his own late in the quarter, as he found Jaxon Watts on a 13-yard pass play that helped put Wimberley up by 21 once again. The Panthers answered with a short TD run by Alegria, but McCollum put the finishing touches on the triumph in the final seven minutes of the game.

McCollum capped a scoring drive with a 1-yard TD plunge and then hit Limely on a 56-yard scoring toss that put the exclamation point on the Texans’ blowout win.

McCollum finished the contest 18 of 22 passing for 221 yards and five scores in addition to 26 yards and a TD on the ground. Running back Moses Wray added 93 yards on 15 carries, while Marshall and Limely each hauled in a pair of scores.

“We knew if we played a complete game we’d have a great chance to advance on, and so that confidence level was there,” Warren said. “They just kept feeding off of it.”

Wimberley has now advanced to the state semifinals and will meet Silsbee for the right to play for a state championship at AT&T Stadium in Arlington.

Warren said the Tigers (9-3) will be yet another tough opponent for his battled-tested Texans.

“They’re going to be the best football team we’ve played up to this point and we wouldn’t expect anything less in a state semifinal,” Warren said. “Very athletic, and so they do provide challenges for you just because of team speed and their size up front. It’ll be a tough matchup for us, there’s no doubt.”