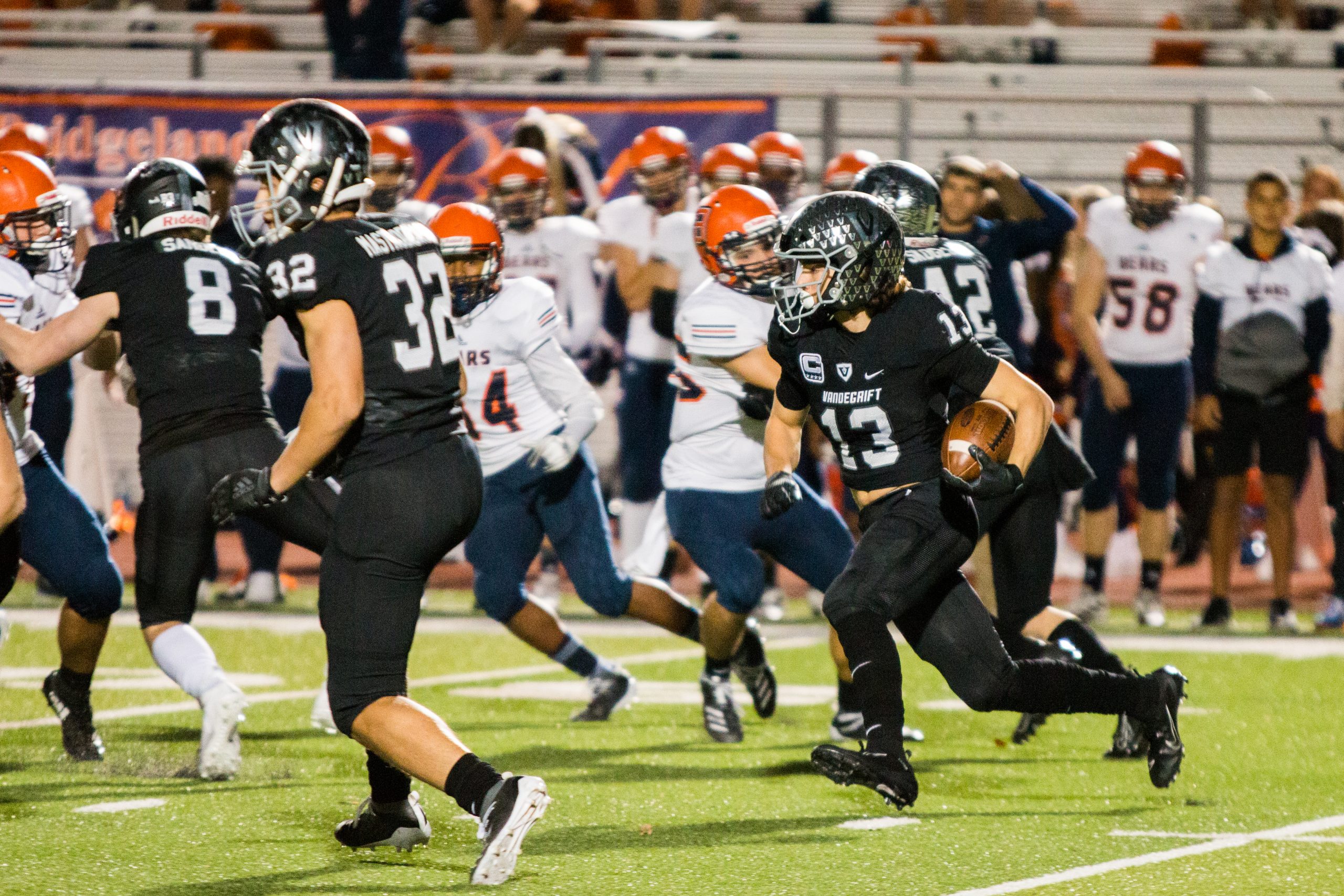 Vipers Survive 1st Round 14-13 over Bridgeland

Vipers Survive 1st Round 14-13 over Bridgeland

Vandegrift has played a number of close games over its two consecutive perfect regular seasons. Six of its wins, in fact, have been decided by a touchdown or less. With that said, it should be no surprise the Vipers are built for the fourth quarter. That showed true Friday, as Vandegrift scored back-to-back touchdowns in the final period to shock Bridgeland for a 14-13 comeback win at Monroe Stadium in Austin.

“I’m not sure if there’s any one moment that changed, but our guys’ consistent fight, I think you’ve seen that over the years. We’re never out of the game,” said Vandegrift coach Drew Sanders. “I’m just impressed with our fight. I always am. We’re never, ever, ever out of a game, and it just proved it once again tonight, and we’re happy to celebrate with a gold ball.”

“It’s good to have that experience in our belt,” senior linebacker Jax McCauley added about the recent history of close wins. “It builds a great team, having to face a little bit of adversity, so we were used to that coming in. This team never quits and that’s what I love about this team. We just keep fighting until the very end.”

The first three quarters weren’t pretty as Bridgeland dominated possession and took a 13-point lead that felt larger. Before Vandegrift began its comeback, the Bears had run 71 plays to the Vipers’ 20 and were crushing them in the total yardage department (327-90).

But the Vandegrift defense was in prime bend-but-don’t-break mode and had seven fourth-down stops to keep Bridgeland from pulling away. Then, with the Vipers down to their last breaths, the offense came alive.
First an 11-play, 76-yard drive ended with senior quarterback Dru Dawson tossing a 29-yard touchdown pass to sophomore wideout Blake Youngblood (6 catches, 82 yards) on a fake wide receiver screen to make it 13-7. Then, Dawson put the dagger through the heart with a 29-yard touchdown pass up the seam to senior Trey Mongauzy (4 catches, 72 yards) with 1:27 remaining to cap a 7-play, 75-yard scoring march.

“We made second-half adjustments,” McCauley said. “Coach Sanders is a great coach. He came into the locker room. He talked to us about what we have to do better and we made adjustments, dug down deep, and found a way to stop them.”

“It was a crazy game but we stuck together and that’s the main thing. We never gave up. Great overall win,” added Dawson. “We kept playing together and we kept trusting the play calls. We really just came down to executing our stuff, playing wishing our game, and our coaches put us in good position to move the ball, and we’re just clicking on all cylinders that last quarter.”

The one-point differential was possible because of a blocked extra-point by McCauley near the end of the first half, which Sanders pointed out as one of the most important plays in the game.

“One of the things I’d like to call attention to is we blocked the extra point right before half,” Sanders said. “We were favored. Everybody’s telling us we were good, whatever, and then we’re down it’s really easy to pout, and for our guys to come and fight and block that extra point. It ended up being the difference in the game so I really think that guaranteed is one of the turning points.”

“Coach Sanders called a block middle and Bridgeland is a unique team,” McCauley said. “They take a step sideways on the blocks instead of stepping straight and I just found a seam and just hit it there.”