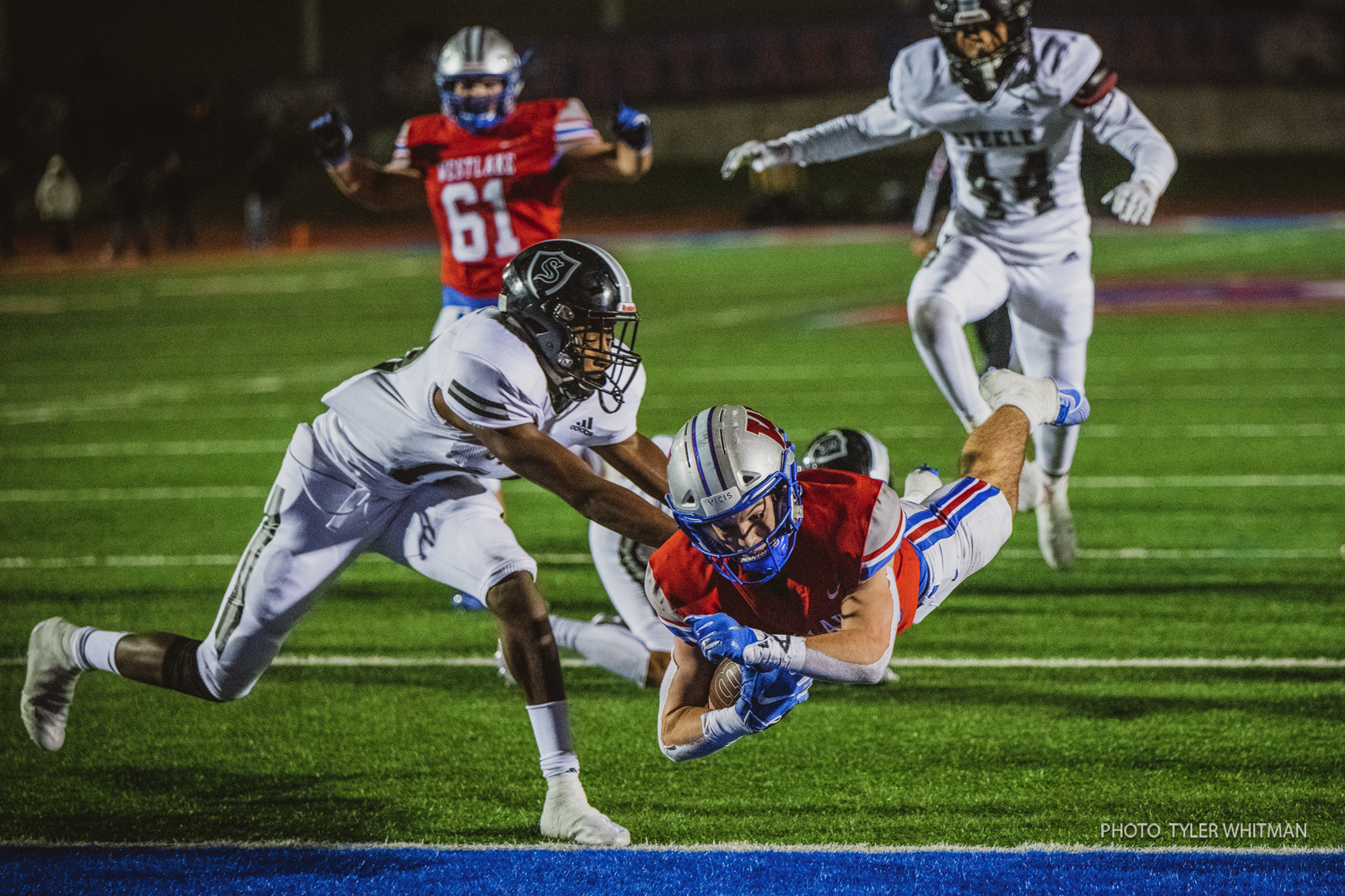 A familiar playoff matchup took place at Chaparral stadium between the Cibolo Steele Knights and the Westlake Chaps. Just two years ago Westlake had knocked the Knights out of the playoffs in a 28-14 victory. The Knights were trying to rewrite history in the first round of Texas high school playoffs. History repeated as the Chaps beat the Knights 30-7 in what was a much closer game than the score implied.

Steele received the ball to start the game, a game that would be dominated by defense. Steele would go three and out setting the Westlake Chaparrals up in great field position. After picking up a first down or two the Chaps found themselves in a 3rd&16 situation after a fumbled snap by Kirkland Michaux. Michaux found star receiver Mason Magnum for 13-yards but with a price as Magnum took a massive hit flipping him in the air.
Going for it on fourth down Kirkland threw up a fade to 6’4″ freshman receiver Jaden Greathouse who drew a pass interference call. The Chaps would later make a field goal, giving them a 3 point lead.

Steele’s drive would open with an explosive play as receiver Daryn Mcknight took an end-around for 33-yards. Coming into the game Mcknight had only had four carries those had gone for 112 yards and an average of 28. Steele would not be able to push the momentum forward as they threw three incompletions. With the kicking unit coming onto the field they were hoping to tie up the game, star Westlake safety Sage Luther had a different idea as he blocked the kick, Braden Duncan would recover and return it to the 47-yard line.

Westlake would replicate the opening drive as they drove down the field and finished it off with a field goal. Only up by 6 points, Steele could take the lead back with a big play. Steele placed together another strong drive highlighted by Daniel Jackson’s 15-yard catch and De’Quavion Thomas’ 5-yard touchdown run.

There was one matchup in particular that every fan loved watching and had a undeniable impact on the game. It was #5 vs #5 Daryn Mcknight vs Sage Luther. Mcknight was a big-time playmaker for Steele as they never stopped feeding him the ball. He was always covered by Westlakes promising safety Sage Luther. One would make a giant play and then the other would come right back with one of their own. Sometimes they would cancel each other out, regardless, it was a great matchup of two competitors.

Kirkland Michaux answered Steeles touchdown instantly as he found senior receiver Ryan Lindley on a 38-yard corner route for a walk-in touchdown. This set the Westlake section on fire, it was the big play they needed to assert dominance and take over the game.
Westlake would soon get the ball back after a Steele punt and they tried to repeat history in throwing the corner route again. This time history was not so forgiving as Kirkland’s pass was intercepted by Maison Sharp who made an excellent catch on the sideline.

The Knights were officially in their two-minute drill trying to get a score and even the game up before half time. The drive started with a 40-yard pass to Daryn Mcknight who was tackled by Sage Luther. Steele quarterback Wyatt Beagle scrambled for 11-yards just enough to convert on 3rd down. Beagle would than find Daniel Jackson on a 15-yard pass over the middle. On the next play, Beagle would overthrow his receiver and be snatched out of the air by Westlake defender Michael Taffee. Westlake would capitalize on the field position and score a field goal putting them up 16-7 heading into halftime.

Heading into halftime both teams have played great games but both also needed to improve certain areas of their game. For Steele, it was about getting into the endzone and cashing in on possessions. They were to close too many times to have only scored 7 points in the first half. For Westlake they needed to run the ball more effectively, they needed to move the chains and not force turnovers if they wanted to keep their lead.
Westlakes offense started heating up in the 4th quarter. Steele’s defense felt defeated and Westlake took advantage of that running the ball straight up the gut down after down. Westlake receiver Jason Croker (lined up at running back) sprinted through the running lane than dove into the endzone for a 4-yard Westlake touchdown.

Westlake will move onto the second round of the playoffs where they will face Brennan High who are fresh off a 35-13 win over Roosevelt. Coincidentally Westlake squared up against Brennan in round two of the playoffs last year with Westlake winning 49-7.

Vipers Survive 1st Round 14-13 over Bridgeland
Wimberley levels up to Area Round with coach Warren.