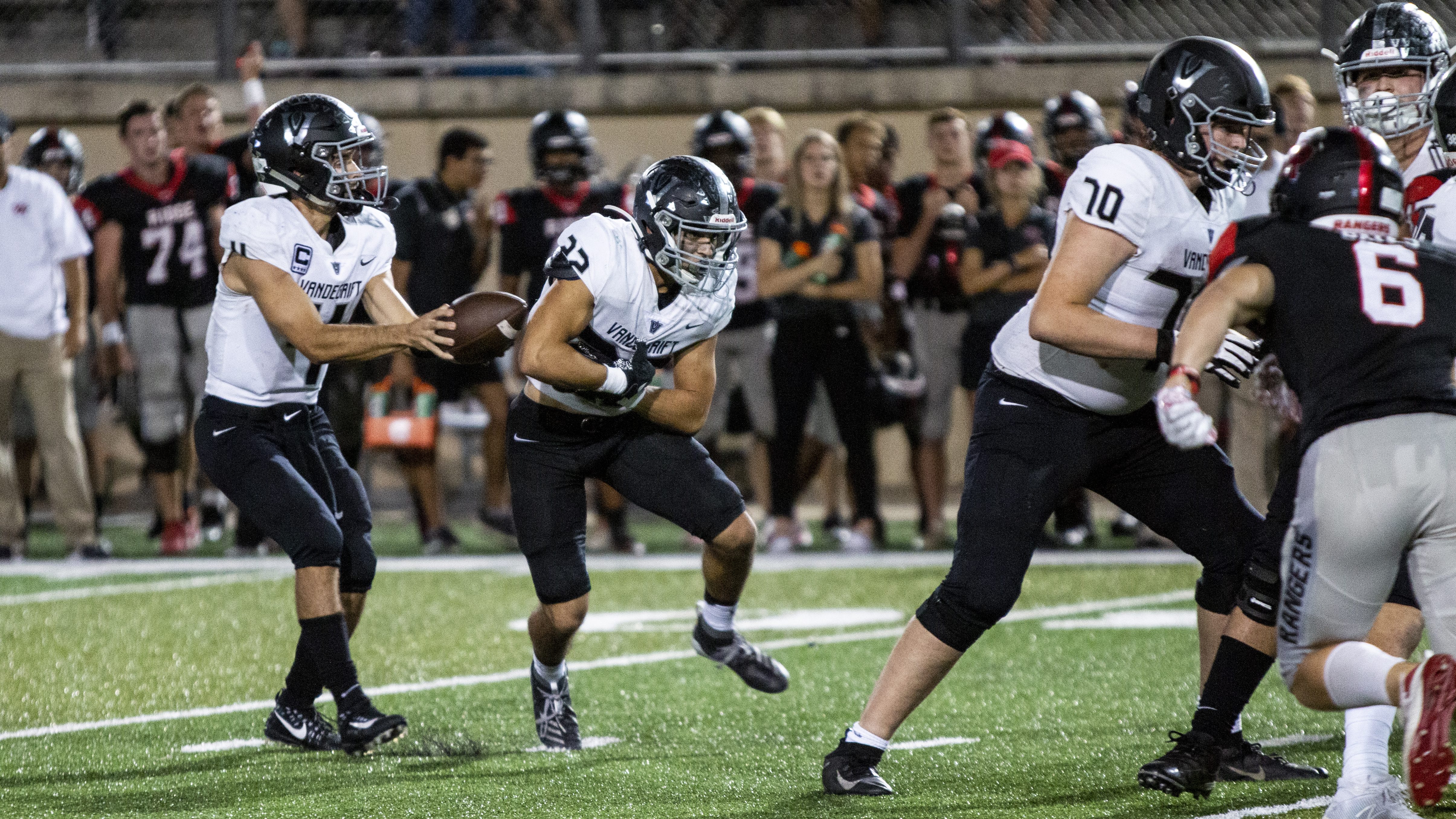 This story has been written before, and will likely be written again. Vandegrift’s mighty defense went up against a high-scoring offense, and like it usually does in these situations, shut it down. The Vipers used a solid game plan, maximum effort and near-flawless execution to keep Vista Ridge (4-1) off the scoreboard for the first two-and-a-half quarters in a 31-12 win Friday at John Gupton Stadium in Leander, TX.

“We knew we’d be depending on our defense tonight,” said Vandegrift coach Drew Sanders. “We felt it was strength versus strength because they came in averaging over 40 points a game and for us to do what we did tonight, shut them out in the first half really I thought set a tone to our guys. We had a great week of work. We didn’t play particularly well last week in a win over Hendrickson and everybody kind of got down on us. I think the kids took that personal, came out and played really well tonight.”

The outcome might’ve been different if not for some costly mistakes by the Rangers. Vista Ridge marched down the field on its opening drive before Vandegrift stiffened up right before the goal line. Facing 4th & goal from the 1, the Rangers surprised the Vipers with a perfectly drawn up pass play. The execution fell short, however, as the wide receiver dropped a ball that hit him right in the numbers. On the ensuing possession, Vandegrift punched the reeling Rangers right in the mouth with junior running back Bowen Lewis (23 carries, 170 yards, 1 TD) breaking loose for a 48-yard score.

“We worked all week on our train check,” Sanders said, “which is the adjustment to their big, heavy set, and we executed it to perfection, and so I was really pleased to see that. It was first & goal from the 1, and it just shows a lot of guts on our defense to, first of all, do what you’re coached to do and then stop them four downs in a row. Huge credit to our defense, just unbelievable heart.”

The Rangers also had two back-breaking mistakes on special teams and a pair of lost fumbles, while Vandegrift played a clean game with zero turnovers and only two penalties. Vista Ridge had a deep snap sail over its punters head to set-up a five-yard touchdown run by sophomore running back Ryan Sheppard to open the second quarter.

“That’s kind of what our defense does, it makes plays, and then our offense is opportunistic, and it’s also very specific and organized, and they do a great job of making the plays count,” Sanders said. “We’re not a super explosive offense, but we’re a very efficient offense that gets things done and it’s a recipe for winning ball games… I don’t know how people view us, but I think as I look at my own team I see us as a team that plays really sound, fundamental football. We don’t make many mistakes. We play good defense, we play efficient offense, we play solid special teams, and I think we’re a tough out for anybody we play.”

A lost fumble later in the period gave the Vipers another short field, which they took advantage of as senior quarterback Dru Dawson (8-for-13, 82 pass yards, 2 TDs, 48 rush yards) hooked up with senior wide receiver Trey Mongauzy for a 14-yard score. Vista Ridge opened the second half with another botched punt snap. The Vipers scored three plays later with Dawson finding Mongauzy (3 catches, 46 yards, 2 TDs) again to make it 31-0 and send the more casual fans scrambling to their cars.

“We get a great week of work in. We trust our coach’s game plan. They work really hard to put a great game plan in and we stay locked into the game. Good things happen when we stay locked in,” said senior defensive end Matthew Graham. “We (the defensive line) are not the biggest, but we play really hard, we believe in each other, we believe in our D-line coach, who’s an awesome guy, and we’re relentless. We always find a way.”