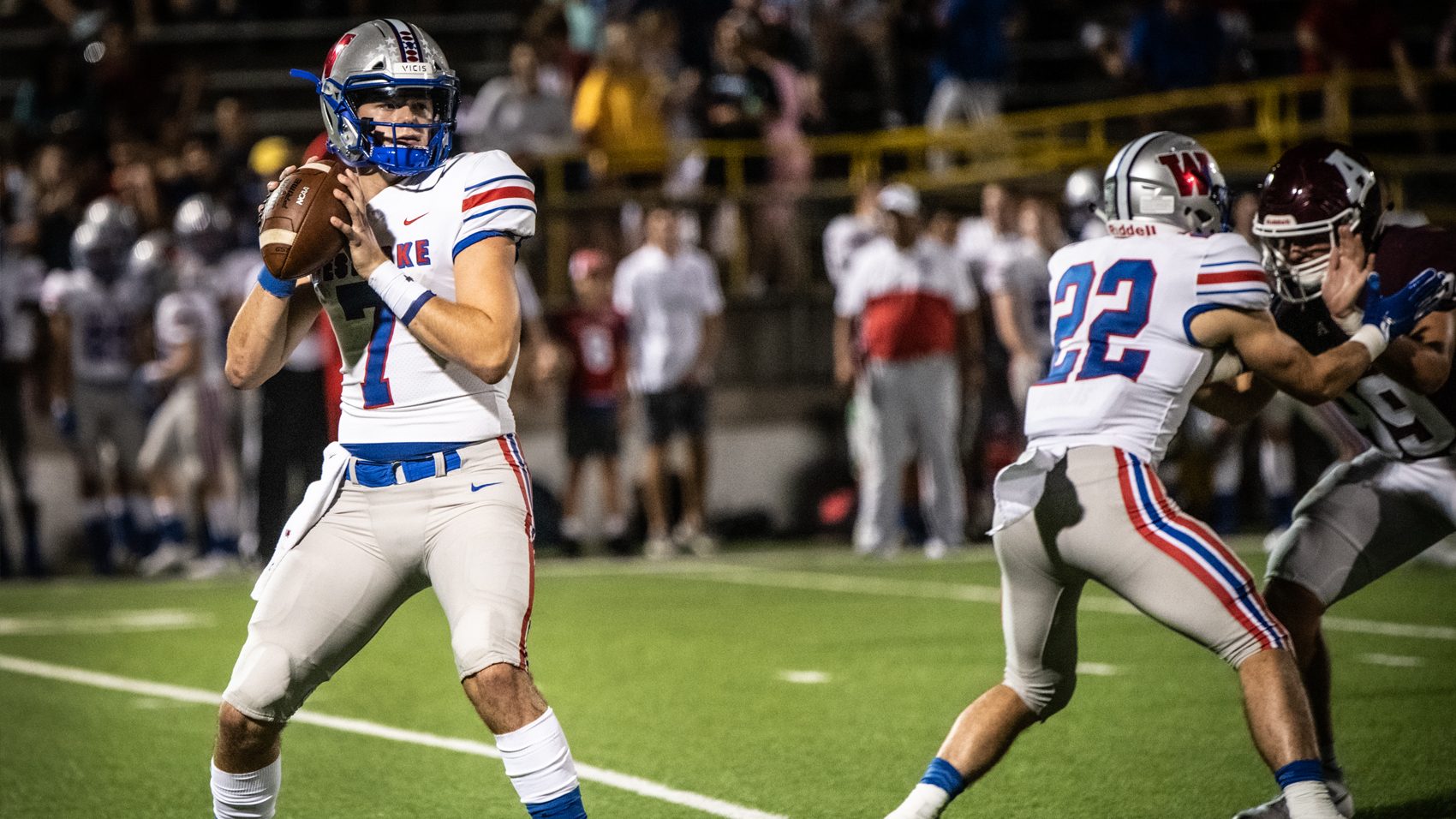 Friday night, a decades-long hometown rivalry was rekindled as the Austin High Maroons took on the Westlake Chaparrals. The student sections were jammed packed with loyal fans who tirelessly cheered on their team. The unyielding support compelled both teams to play with more energy and vigor. This game was one for the books and even broke records as Westlake’s senior wide receiver Mason Mangum became the all time receiving leader in Westlake football history.

Westlake came into this game with 32 consecutive winning seasons as well as  a 21-2 record against Austin High dating back to 1994 and were the favorites in this matchup. Though the odds were against them, Austin High looked to put up a fight and turn the tides.Ultimately it was not enough as Westlake overpowered Austin winning 63-8 and pushing the all time record to 22-2. Putting Westlake in a comfortable 5-0 position, they look like division favorites this year.

Austin High received the ball to start the game, coming off a good win against Lehman they looked to carry the momentum onward. Westlake quickly shut that down forcing the Maroons backward into a 4th & 20. The Maroons came out in punt formation. Westlake surged through the left side of the formation allowing senior wide receiver Ryan Lindley and junior defensive back Lucas Miruer to get a hand on the ball ultimately blocking the punt.

Starting on Austin’s 10-yard line senior quarterback Kirkland Michaux scored on Westlake’s first play from scrimmage. Kirkland ran the ball in on a 10 yard quarterback keeper putting the first points on the board. In this game Kirkland was one of four quarterbacks who played for Westlake Highschool.

Austin jumped out to a better start on their second drive after picking up a first down, however they were soon confronted by a problem that lingered throughout the game. Pass protection. Austin simply could not handle Westlake’s pass rush as quarterback Charles Wright was in constant duress. On that drive, Charles was sacked by senior defensive end Bobby Duncum to ultimately end the drive.

Starting on Austin’s 44, Westlake hoped to repeat their last drive that ended in a touchdown. This time Austin’s defense was a little bit stiffer as they forced Westlake into multiple third downs. Stoping the Westlake offense on the last two downs, Austin forced them into a 3rd & 2 situation from about the 16. Needing the first down, Westlake running back Grey Nakfoor took it straight up the middle resulting in Westlake’s second touchdown.

This game was truly a battle in the trenches. It was decided by which team was going to be more aggressive upfront and put the other team in a bad situation. At times Austin High was able to do that, but ultimately Westlake won the battle in the trenches. Their offensive line provided clean pockets as well as running lanes. This was the true defining factor of the game.

Heading into halftime Austin needed to change something, while Westlake was focused on preserving their lead. Westlake took their foot off the pedal in the second half as they ran a slower-paced offense and were more conservative. On the flip side, Austin came out firing hoping for redemption or just something to build on.

Austin’s offense and defense played much better in the second half, though it was not enough to reclaim the lead, it was a valiant effort.

After having multiple drives that stalled out on 4th down, Austin needed to make a play and they did just that. Set up nicely by a PI call Austin hiked the ball from Westlake’s 26 yard line. On the right sideline senior wide receiver Colby Kalbacher went deep on a fade route with a money pass from Charles Wright. Austin had scored their first touchdown. Austin went on to get the two point conversion. This meant that Austin scored more points against Westlake than any other team this season.

Offensively, Westlake quieted down but Austin High middle linebacker Everett Butler did not. Butler went sideline to sideline making tackles and blocking passes. Butler was the highlight of the Austin High defense, along with defensive lineman Abrion Boudreaux.

That was not say that Westlake did not make defensive plays in their own right, as demonstrated by senior free safety Sage Luther’s interception to set the Chaps up in great field position.

Westlake’s offense was looking to run the clock out when all of the sudden Chaps running back Zane Minors burst through the middle of the field for a 76-yard touchdown run, he took off and never stopped.

“Great early field position and good pass rush”, is what Westlake head coach Todd Dodge attributed to this victory over Austin High.
When asked what area of the team he is most focused on improving, Dodge said, “I’m most looking forward to improving our running game on offense.”

“I will continue to use all three QB’s. Together they lead the greater Austin area in passing yards, TD passes and completion percentage. Stats aren’t important but production is. They have all been productive”, Dodge answered when questioned about his multi-quarterback strategy.