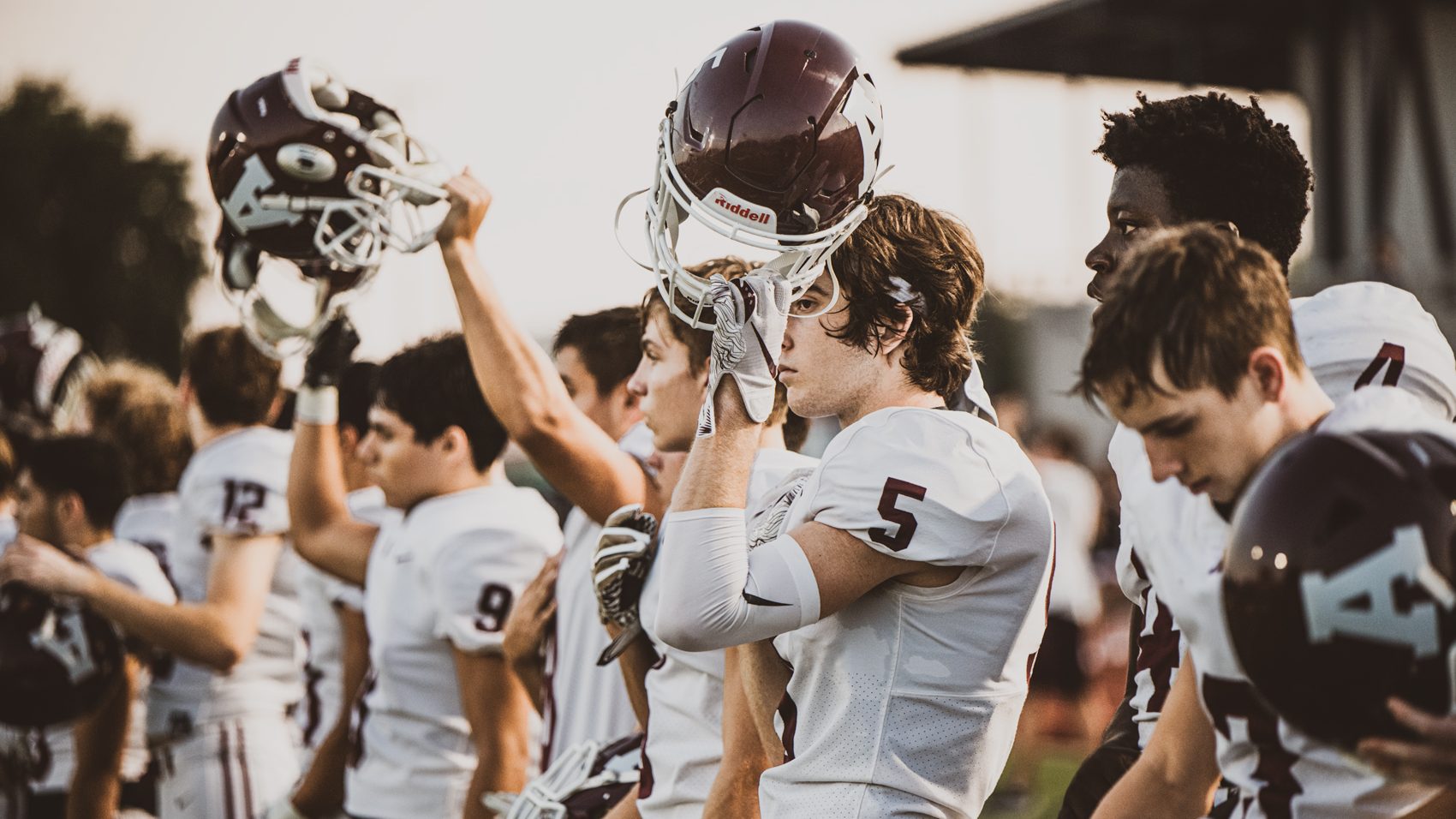 In Kyle Texas, the story of the Lehman’s homecoming will not have a happy ending. In a game played under a harvest moon, the Friday night lights shined bright as the 1-1 Lehman Lobos face the 1-1 Austin High Maroons in the district opener. Within minutes the crowds at the Bob Shelton Stadium were quieted as the Maroons began their assault and ultimately beat the Lobos 38-14.

The Austin Maroons received the kick and the game was on. Austin High assembled a methodical drive repeatedly picking up first downs. An explosive carry by senior running back Grayson Davis earned them 23-yards. Just outside of the red zone, junior quarterback Charles Wright connected with junior wide receiver Nick Anderson for a 21-yard touchdown.

Lehman’s offense was looking to tie up the game, however, Austin’s defense had a different idea. Lehman quarterback Logan Travis dropped back to pass, little did he know defensive back Holdan O’kelley was waiting. Holdan jumped the route intercepting the ball and brought it to the house.
The score was 14-0 Austin High and the Lobos needed to score. The Lobos drove downfield putting together a 20 play drive in which they ran the ball 18 times. This was a run-first Lehman offense. After 19 plays they had a 4th and goal about two yards out. Down by 14 points Head Coach, Bruce Salmon opted to go for it. Running back Kanui Guidry ran up the middle only to be met by hard-hitting linebacker Everett Butler who made the 4th down stop.

Austin was in a dangerous position so close to their endzone. Charles Wright dropped back, seeing the Nickel Blitz he quickly threw the out route but the ball was tipped by Davian Gil. With the pass wobbly, junior defensive back Roy Mallet seized the opportunity and snatched the ball out of the air for a Pick 6.

Trying to shake off the Pick 6, Austin High put together a nice drive. The drive was highlighted by Nick Anderson’s 41-yard reception which ultimately set them up for a field goal once they stalled out. The Lobos offense was set up in excellent field position after freshman Jayden Brown Returned the kickoff all the way to Austin’s 18. From there the Lobos pounded the rock until they were on the Maroons 2-yard line. With the end-zone in sight, Logan Travis fumbled the ball on a hand-off to be picked up by Austin OLB Andrew Mosser who returned it to Austin’s 39. This play was an accurate description of how the rest of the game went.
After Austin stalled out again Lehman came back with a big play of their own. Senior running back Keyshaun Williams had been a workhorse all game in this run-heavy offense. It finally paid off, from Austin’s 39 Keyshaun broke the run wide open scoring from 39 yards out. After this run, both teams stalled on their drives leading to half time with the score AHS 17 – LHS 7.
Lehman received the ball to start the second half and was soon faced with what killed them in the first half, fumbles. Still on their side of the field, Austin High Defensive Coordinator Bernard Riley sent OLB pressure and it got home. Senior OLB John Colunga hit the quarterback and knocked the ball out. It was a team effort to recover the ball as 3 Austin Maroons dove on the ball immediately.

The Linebackers don’t get all the fun, is what Maroon’s junior corner-back Ben Woodhouse was thinking as he was dialed up on a blitz. Woodhouse hit home stripping the quarterback and recovering the fumble putting the offense in a great position.

Up until this point The Austin High offense had not been able to move since their first drive even with the great field position provided by the defense. On one of their longest drives of the game, the Maroons put together a 15 play drive topping it off with a 5-yard touchdown to senior wide receiver Colby Kalbacher. This sparked the offense and they never took their foot off the petal.

After the defense forced another fumble, yes another fumble, it was apparent Lehman was not able to hang on to the ball. It only took one play for Charles Wright to find Nick Anderson for a 54-yard touchdown. After Austin’s defense made another stop Austin’s offense made another electric play as Grayson Davis broke a 52-yard touchdown run to officially seal the game.

When asked about the numerous forced turnovers by his defense, Defensive Coordinator Bernard Riley had this to say, “ITS ALL ABOUT THE BALL! Getting the football back trumps everything. Takeaways controlled the ball game.”

“The Westlake game will come down to our guys doing their job and getting takeaways just like last week”, said coach Riley of their upcoming second divisional game against Westlake.
It was a very impressive performance by Austin High, especially the defense and their ability to force turnovers. After watching some of Austin’s practices I could see the emphasis they put on forcing fumbles as well as tackling, it paid off. This was a big win for Austin, not only was it a district match but it showed that their defense can also win games. The question is how will they fare against the 4-0 Westlake Chaparrals in the second divisional game of the season.