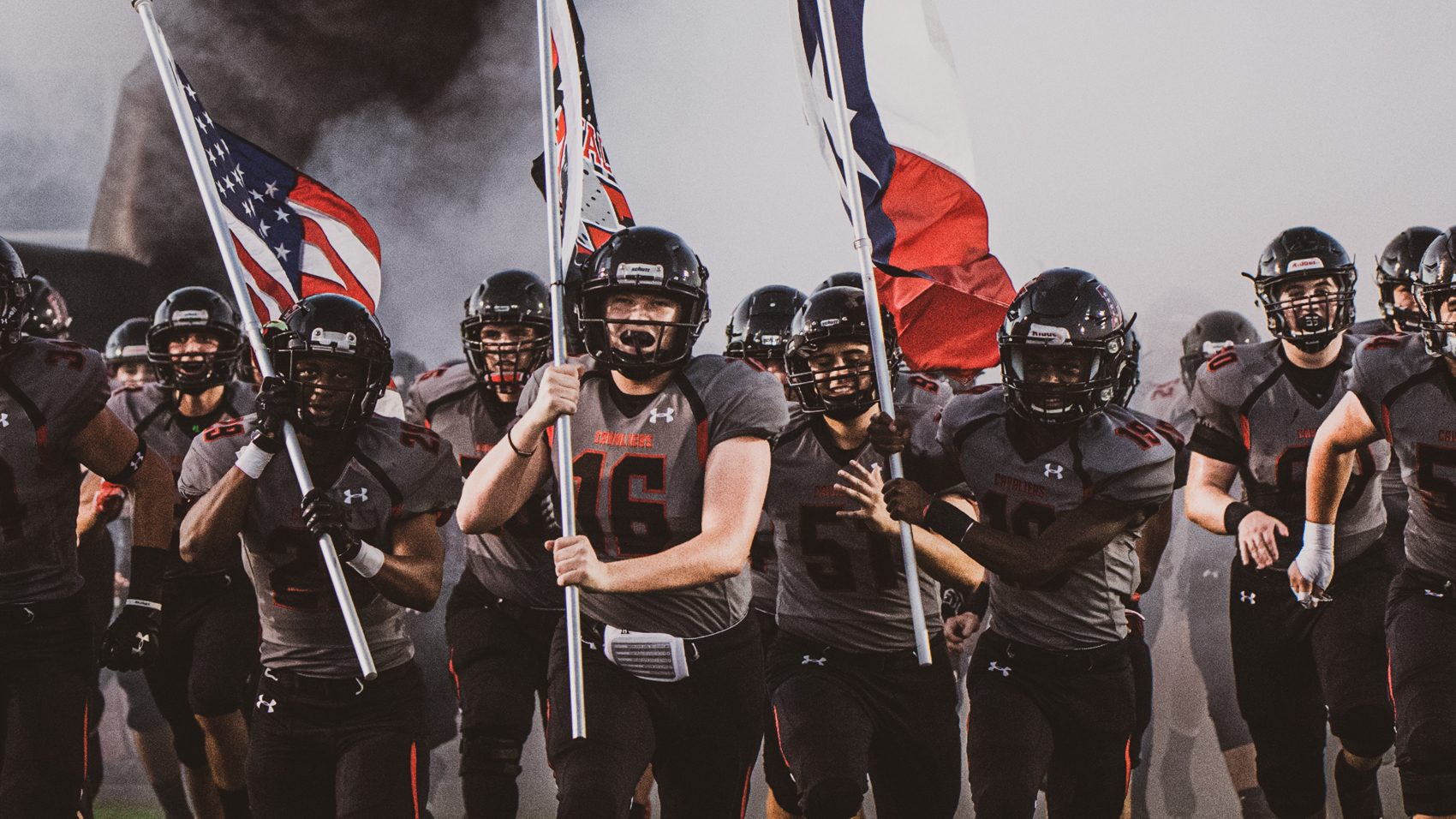 Everywhere you look in Cavalier Stadium six silver stars appear, each one representing a State Championship. Lake Travis came into the season looking to add their seventh star. To do this head coach Hank Carter says they will take it one game at a time. With their sights set on another championship the Lake Travis Cavaliers faced off against the Austin High Maroons in the third divisional game of the season.

The eruption from the Lake Travis tunnel could be heard and felt. The entire team was inside the iconic helmet tunnel jumping and shooting with a ferocity that would intimidate any opponent. After coming off a tough loss against Westlake, Austin High had another uphill battle against the Lake Travis Cavaliers. Ultimately Lake Travis walked away with a shutout victory winning 63-0 over the Austin High Maroons. Offensively Lake Travis dominated this game in both the ground and air totaling 770 yards.

Lake Travis had the ball to start the game, looking to seize the momentum early the Cav’s quickly picked up a first down. It got harder from there as Lake Travis would throw three straight in-completions resulting in the punter taking the field on 4th down.

Austin matched Lake Travis’ drive by picking up a first down but eventually stalling out. After Quarterback Charles Wright had quick-kicked the ball Austin had started winning the field position battle as they almost put Lake Travis on their own 1-yard line.

Despite bad starting field position Lake Travis placed together a steady drive working their way downfield. After the first three plays of the drive were runs; senior quarterback Hudson Card came back with a 17-yard strike off the RPO to Kyle Eaves setting Hudson Card up for another big throw down the right sideline. Running Back Marcelo Alanis capped off the drive with a 7-yard touchdown run to put the first points on the board.

Following another punt from Austin, Lake Travis put together another methodical drive downfield, including a big 26-yard pass from Hudson Card to Grayson Sandlin. The drive was capped off with a 15-yard touchdown run by Wesley Erving.

One thing that worked all day for Lake Travis was the quarterback roll out. Numerous times the Lake Travis offensive line allowed opposing defensive linemen inward to the pocket while Hudson Card rolled out and delivered a perfect throw for a big gain. This was the go-to concept for Lake Travis as they primarily pulled it out on key 3rd downs.

On Austin’s third offensive possession they drove downfield, including a big 15+ yard run by running back Grayson Davis as well as a wide receiver screen to captain Colby Kalbacher to pick up a first down. Austin had finally gotten past the halfway point and now they were on the Lake Travis 31 yard line. With the end-zone in site, Austin’s center mishandled the ball leading to a fumble and recovery by Lake Travis. This ended the drive and put Lake Travis in yet another good spot to score.

For the rest of the half, Austin was not able to pass midfield but Lake Travis was able to score touchdowns including a 20-yard touchdown pass from Hudson Card to senior receiver Grayson Sandlin, a 15-yard touchdown pass on a roll out to Kyle Eaves and their biggest play of the half when wide receiver Grayson Sandlin broke a short slant for a 50-yard touchdown, his third so far. It was safe to say that the Lake Travis passing attack could not be stopped as they totaled 499 yards through the air. Despite all of this scoring Austin’s defense did come big on a forced and recovered fumble to stop Lake Travis.

Going into halftime Austin needed to improve their big play ability. Something that they had been great at all year was haunting them throughout the first half. One of the reasons that they often stalled out near midfield was they were not able to generate big plays. This was the deciding factor in the game. If Austin was able to generate more big plays they would have found themselves in closer competition.

Offensively, the second half was not much better for Austin as they once again stalled near midfield allowing Lake Travis to start chewing clock. Lake Travis hit a big 52-yard passing touchdown on just their 3rd play of the half, on this one Hudson Card connected with Kyle Eaves essentially putting the game away.

Lake Travis slowed their offense down as they put second string quarterback Nate Yarnell in. They also slowed down the tempo trying to run the clock out and claim another victory. The Cavaliers are now 3-0 in district play and 4-1 in the regular season.

Coach Hank Carter had this to say when asked which player he thought had a breakout game, “That’s a good question – I think several, Grayson Sandlin made an awesome run after the catch, this is something we have been working on with him and wanting to see him do. I also think Weston Stephens had a great game as well as Gary Gordon.”

Lake Travis walked away with another win, once again they look like divisional favorites. Lake Travis has a favorable matchup against the Lehman Lobos next Friday and then what we are all waiting for, the Battle Of The Lakes! Lake Travis vs Westlake on Oct 11th. Austin has a must-win matchup with Del Valle this Thursday that could determine the playoff contenders.