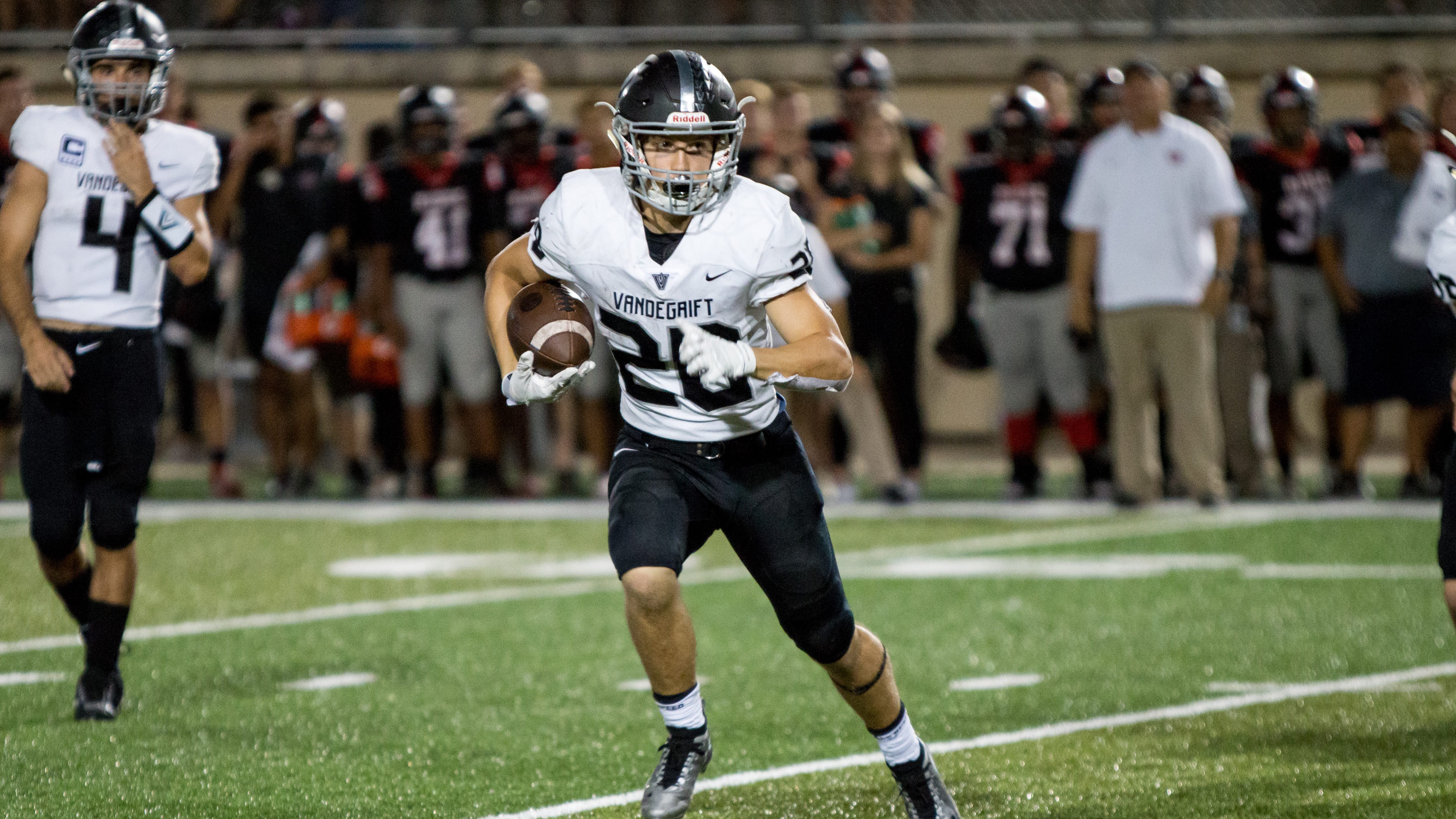 Round Rock proved a worthy challenger for Vandegrift’s District 13-6A throne, but the defending league champs got a stellar game out of senior quarterback Dru Dawson and made a couple key defensive stops in the final frame to maintain their supremacy with a 32-25 win Friday at Monroe Stadium in Austin.

“We needed this,” said Vandegrift coach Drew Sanders. “This is good development for us, and I told the guys all week that this is going to be a playoff atmosphere. This is going to be like a 4th round 6A playoff game, and that’s exactly what happened.”

Dawson completed 17-of-20 passes for 275 yards with four touchdowns and an interception while adding 69 yards with his legs in by far his best game of the year. He also made a pair of big plays on a fourth-quarter touchdown drive to push the Vipers ahead for good.

After a 19-3 mid-game run allowed Round Rock to take a slim one-point lead, Dawson heaved a deep ball in stride to junior wide receiver Taylor Dumar for a 39-yard gain to the 15. Three plays later, he scrambled around to give his guys extra time to shake free and found senior tight end Brady Middleton wide open in the end zone for a go-ahead touchdown.

“His improvement just continues to go up, and up, and up,” Sanders said. “He was so accurate tonight. He made one bad throw the whole night, really. Other than that, when he couldn’t throw it, he took off and ran. He had several nice runs for us, too. And then on the sideline when we had a little of that lull… I heard him over to the side talking to his guys and encouraging them, and that’s just what I need from my senior quarterback.”

Round Rock rolled up 348 rushing yards and 23 first downs, by far the most Vandegrift had given up in either category all season. But the Vipers succeeded in their game plan to take senior wide receiver Collin Sullivan out of the game. The Division I signee (Purdue) finished with just one catch for nine yards (albeit, a touchdown).

“We were not going to allow them to big-play us,” Sanders said. “We were going to bleed a slow death and our philosophy worked.”

After retaking the lead with Dawson’s fourth quarter heroics, Vandegrift’s defense stepped up on consecutive possessions with a three-and-out and a fourth-down stop in the red zone.

“We’ve been in kind of an odd front the last several games. We had to go back at key points in our game and go back to our even front on defense, made some adjustments there and stopped them,” Sanders said. “A critical stop that we had that we needed, was because we went back to something we’ve been doing for years. We just haven’t done it much this year.

“It was nice to see us be able to adjust and do it immediately. Our kids, I always tell them, their secret weapon is how smart they are, and they were able to really adjust to what we were doing and make plays. It’s hard for a defense, when you stop everybody all year long, and you come against an offense like this, that is scoring on you, it’s hard for you to not get down on yourself, and those guys found a way to rally, keep themselves mentally pumped up, and find a way to win.”

The offense proceeded to run the final 5:21 off the clock with some bruising runs by junior running back Bowen Lewis (24 carries, 118 yards, 47-yard TD reception), a fantastic catch on a deep ball by senior wide receiver Trey Mongauzy (7 catches, 132 yards, TD, 32 yards rushing) and pivotal seven-yard run on third down by Dawson.

“Round Rock is going to have a great rest of their year. Hopefully, we do, too,” Sanders said. “To be able to win a third or fourth round 6A playoff game, like what tonight was, that just speaks volumes to our kids, coaches and everybody else.”