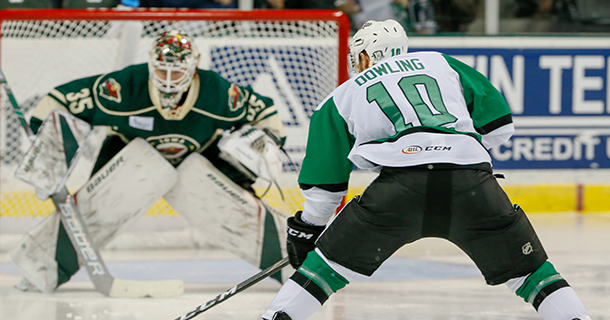 CEDAR PARK, Texas – The Texas Stars, American Hockey League affiliate of the NHL’s Dallas Stars, and the Iowa Wild were scoreless in the first half of tonight’s game at H-E-B Center at Cedar Park, but combined for nine goals in route to a 5-4 Stars win. Texas scored four goals in the third period for the second straight game to earn the win and put Iowa in the loss column for the first time this season.

Ben Gleason opened the scoring for the Stars to tie the Wild in the second period with his first goal of the season. The power play tally was the first of three goals on the man advantage for the Stars in the game as the rookie defenseman danced his way to an unassisted goal.

With the tie score holding until the third period, the flood gates opened. Mike Liambas scored his third of the season on a rebound for the Wild to advance the score to Iowa’s favor. The Stars turned a power play into the tying goal four minutes later. Michael Mersch connected for his second goal in as many games, battling in front of the crease at 5:28 of the third period. Less than thirty seconds later, Nicholas Caamano cashed in his second goal of the season, deflecting the puck off an Iowa defender and into the net.

The Stars seemed to control the pace but Iowa answered as Cal O’Reilly scored his first of the year to tie the game at 3-3. Penalty time continued to hurt the Wild who put the Stars on eight power plays in the game. At 9:01, Gleason continued his successful night, launching a pass to Joel L’Esperance for a redirection. The goal pushed the Stars to a lead that they never relinquished.

Third year forward Denis Gurianov helped the Stars solidify the win with insurance in the final six minutes. The winger notched his fourth goal in four games and held the game winning goal in the decision due to a final tally by Luke Kunin. The Wild netminder Andrew Hammond was pulled in the remaining 30 seconds to help pull his team within one goal but he suffered the loss with 21 saves as the comeback fell short.

Landon Bow earned his third win with the Stars, making 26 saves in the team’s victory.

The two teams meet again tomorrow night for a rematch at the H-E-B Center at 7 p.m.

Get in the Game: Exhibit at LBJ Presidential Library
UNITED STATES GRAND PRIX