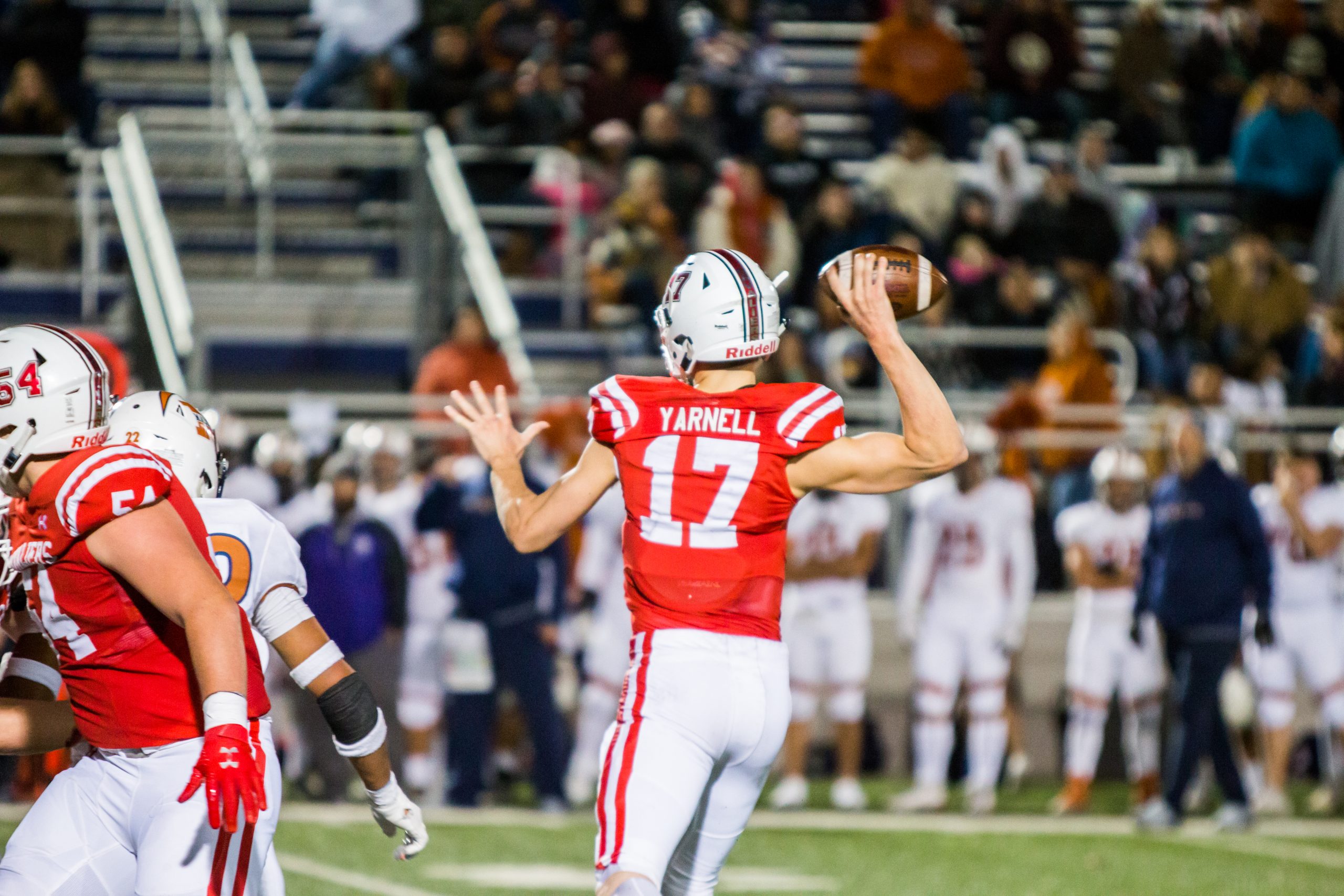 Senior Nate Yarnell, a 6-foot-6 signal caller, is the latest in a
long line of gunslingers that have helped the Cavaliers become a
perennial state title contender and one of the most explosive and
efficient prep offenses in the nation. When Yarnell verbally
committed to Pitt in May, he also became the 10th consecutive
Lake Travis QB to receive a full athletic scholarship at the next level.

In fact, Yarnell was offered a full ride to the University of Houston
before he ever took a varsity snap. Most thought that Yarnell would
have to wait until this season to showcase his skills, but an unfortunate
injury to Texas enrollee Hudson Card thrust the junior into the spotlight
in late October of 2019. He responded by helping the Cavs reel off six
consecutive victories, including playoff wins against Smithson Valley,
San Antonio Madison and Weslaco.

During his six starts, he completed 91 of his 135 pass attempts for
1,248 yards and 11 touchdowns. Unsurprisingly, he earned plenty of
praise from head coach Hank Carter as a result.

“He did awesome,” Carter said. “He was able to get in there and
basically just take the reins and roll with it. I thought he did a fantastic
job and we weren’t surprised. We knew he was a heck of a player
and are now looking forward to him even improving more coming
into his senior year. I think he’s got that kind of potential.”

By now, Lake Travis’ tradition of excellence at the QB position is far
from a secret. But even with the spotlight shining brightly upon him,
Yarnell displayed poise after being thrown into the proverbial fire.

Carter said it’s all just business as usual for those that plan to line up
behind center for the Cavaliers.

“I think that any time a young man at Lake Travis wants to take the
route of playing quarterback they know that, number one, it’s going
to be highly competitive,” Carter said. “We’ve been very fortunate to
have a lot of great players come through here and we still have a lot
of really good quarterbacks in the system right now. I think all of those
guys understand that and they welcome that challenge and that competition
and all of the responsibility that comes with it.

“At the same time, football is a game and there’s pressure on all of those
kids out there and the pressure typically comes from themselves first and
they want to be at their best. I think Nate has handled that appropriately
and he wants to be one of the best players in the country and wants
to win a state championship his senior year.”

A state title win would catapult Yarnell into Lake Travis lore alongside names like
Charlie Brewer, Baker Mayfield, Michael Brewer and Garrett Gilbert.
The Cavaliers currently boast six state championship victories in their history,
with three of those coming during Carter’s tenure as head coach. Lake Travis’
most recent title win was in 2016. 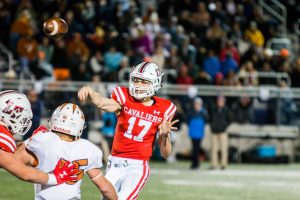 When asked what makes Yarnell a natural at QB, Carter said the senior checks all
the boxes. “He’s a great thrower of the football, he’s a great leader and a super
smart kid,” Carter said. “I think all of the things you would want to start with to
have an excellent quarterback — and obviously his size at 6-foot-6.”

Now for the scary part — for opponents, that is. Carter said that Yarnell is only
scratching the surface of his ability and will continue to improve with more
experience on the field and additional time in the weight room.

“As a high school student-athlete, his body is still maturing and even during
this time we’ve been off he’s been working to get bigger and stronger and
just to make decisions quicker,” Carter said. “I think the maturation process
for a quarterback happens when everything starts slowing down for them.
It’s just because they’ve gotten a certain number of reps under their belt.
I think that’s what Nate is going to focus on and Coach (Tommy) Mangino
is excited to start working with him once we start getting kids back on campus.”

If all goes according to plan, the Cavaliers will open the 2020 regular season
Thursday, Oct. 1 on the road against the Westwood Warriors. However, even
if there are any further disruptions in the schedule due to COVID-19, Carter
said his new starting QB will be prepared to handle whatever hurdles come
his way.

“I think that’s kind of been the name of the game,” Carter said of the
uncertainty caused by the pandemic. “I think you have to be flexible and
be ready to adapt to what’s happening nowadays and he’s done that, so
I think he’ll be ready to roll when we get back out there.”