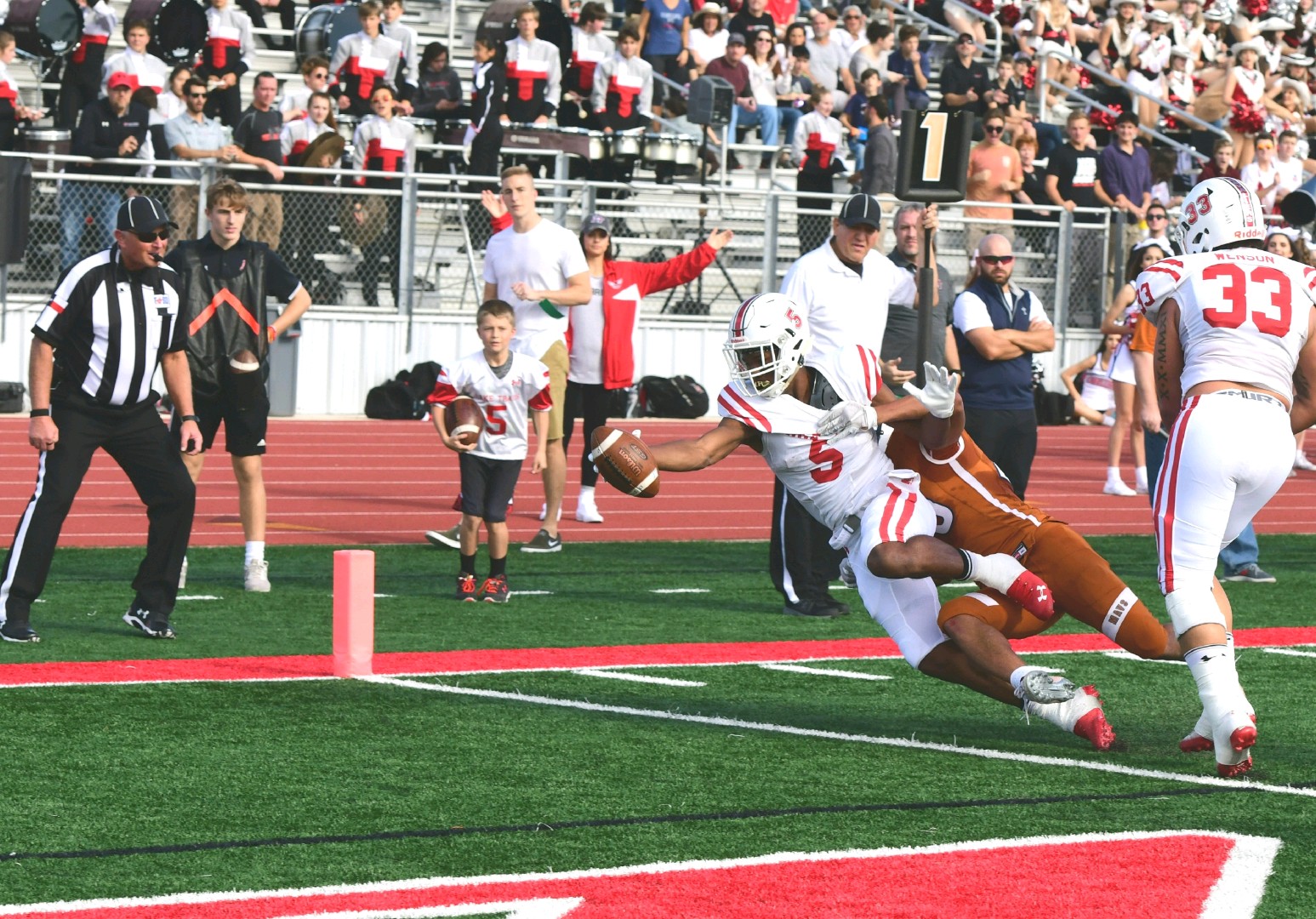 Lake Travis senior wide receiver Garrett Wilson is back and badder than ever. The prodigal Ohio State pledge had eight catches for 169 yards with three total touchdowns (two receiving, one rushing) in the Cavaliers’ dominating 56-35 area round playoff win against San Antonio Madison Friday at Cougar Stadium in New Braunfels.

Wilson missed four of the five last regular season games with a back injury and his absence had started to cast doubts on Lake Travis’s state title aspirations. But he returned in time for the postseason and has looked spectacular with 313 yards in two playoff games, which means the Cavaliers are as dangerous as ever as they chase down a seventh state championship.

“Garrett’s incredible. There’s probably not another athlete like him in the country so we’re certainly better with him and he’s getting more and more back into shape,” said Lake Travis coach Hank Carter.

Lake Travis scored touchdowns on each of its first five possessions to build a 35-14 halftime advantage. The first score came on the Cavs’ first offensive snap. After starting with the ball at Madison’s 28-yard line following a shanked punt off a three-and-out, the Cavaliers motioned Wilson out of the backfield into a diamond quad formation of receivers to the left, which took the Mavericks’ attention away from the right side and allowed junior quarterback Hudson Card to rumble that way for a long touchdown run.

The Cavs second touchdown came off another short field thanks to a shanked punt following a three-and-out. Starting from the Mavericks’ 40, Lake Travis needed nine plays before finding pay dirt on a five-yard touchdown pass from Card to sophomore running back Weston Stephens. Card was wheeling and dealing all day, and finished 21-of-27 for 210 yards with two touchdowns and no interceptions while adding 57 yards and a score on the ground. Stephens led all rushers with 82 yards and a score on six carries as Lake Travis hit the 200-yard mark both on the ground and through the air.

“We started out fast and that was a goal,” Wilson said. “Once we start out fast, it’s really just on us from there. (Card) didn’t miss a lot of throws. We made some good runs. It was a really balanced attack, which made it easy.”

Wilson scored all three of his touchdowns in the second quarter. Wilson had been known for using his versatile athleticism to affect the game in a number of ways. He showed that off when he took a toss out of the backfield for a five-yard touchdown on the opening play of the second period. He also got an easy 39-yard touchdown catch on a trick play when the defense bit on a double pass and hauled in a 14-yard score and an inside-breaking route.

His best catch, however, came in the third quarter when he went over the top of his defender on a deep pass down the right sideline for a 35-yard gain to the two that set up a one-yard touchdown plunge by senior running back Sean Brown-Nixon to make it 56-14.

“Once I see the ball – ‘it’s mine’ – that’s what’s going through my head,” Wilson said of his acrobatics catch in the third. “I see it go up there I got to get it.”

The 35 points given up by Lake Travis is a bit deceiving as three of the five touchdowns came with the outcome well in hand and some of the defensive starters standing on the sideline. Lake Travis’s pass rush was harassing Madison senior quarterback Dante Haeggins much of the day. Haeggans was taken down for three sacks and rushed out of the pocket a number of times. While the Cavs didn’t get a takeaway until the final seconds of the game, they did force seven three-and-outs.