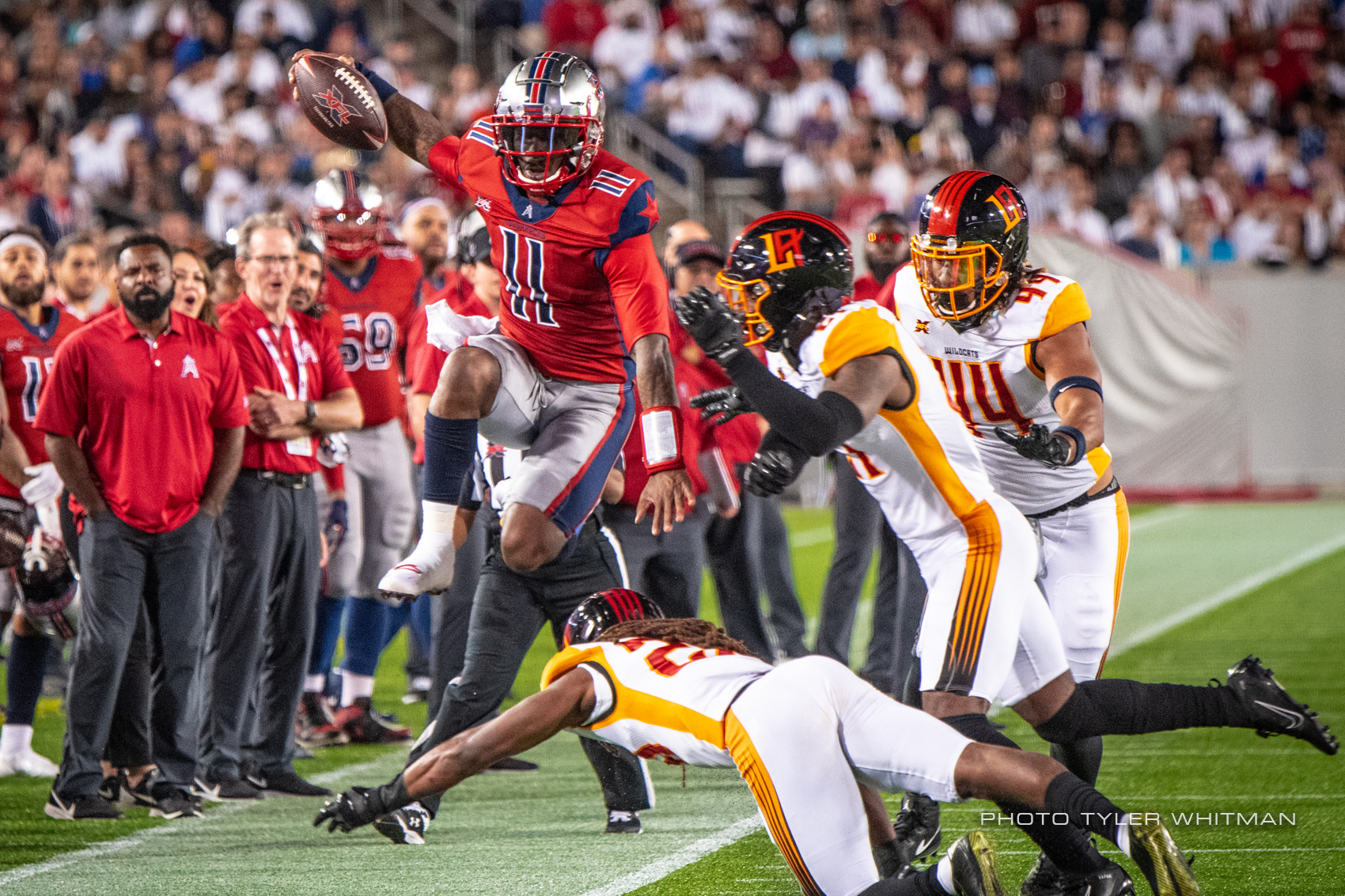 The game started with the new and improved kickoff system where a player cannot move until the returner has caught the ball. The Houston Roughnecks received and after a great return, they were set up at the 39-yard line. It did not take long for dual-threat quarterback P.J. Walker to throw a bomb to his speedy wideout Cam Phillips who not only caught it but took it to the house for a 50-yard touchdown.

“Just one-on-one you know me and P.J., man we have been working it all camp. I just gave him a little stutter [defender] since he was in off coverage. I knew P.J. would give me a chance and I just made a play. It’s great man, the energy out here is electric, this town, this city. Houston supported us and just feels good playing football”, stated Roughneck receiver Cam Phillips.

XFL rules state after a touchdown, the scoring team is not able to kick an extra point, instead they must go for a one, two or three-point conversion. The Roughnecks did not convert giving the Wildcats a chance for the lead. The Wildcats took a more methodical approach with consistent gains of 6,7 and 8-yards moving the chains. On a key 3rd & 12 Wildcat quarterback Charles Kanoff stepped up in the pocket throwing a pass that was tipped straight into the hands of receiver Nelson Spruce for a 20-yard pickup. Kanoff would finish the drive off with a 5-yard QB keeper touchdown.

After several failed plays and a questionable missed PI call Houston was forced to punt, luckily for them the punt was muffed and they recovered in great field position starting at the 38. Houston picked up the first down but was soon forced to take a field goal that shanked left. Both teams would punt on the drives to come.

Later Kanoff attempted a pass, however defensive tackle Kaelin Burnett would not have any of it as he got his arms around Kanoff forcing his throw early which would conveniently land in the lap of defensive lineman Burnett for an interception. The Roughnecks once again stalled out.

Both the Wildcats and Roughnecks amassed drives with the Wildcats scoring on a 10-yard TD pass from Kanoff to wide receiver Jordan Smallwood. The Roughnecks did not make it look pretty but they got the job done as running back Ajene Harris scored on a 16-yard catch off a broken screen. The Roughnecks lead by offensive-minded head coach June Jones, formerly on the Falcons, had a conflicting play style to that of Wildcat head coach Winston Moss a defensive coach, formerly with the Packers.

When the half seemed all but over Roughneck kick returner James Butler made a splash fumbling the ball then picking it up and returning it to the Wildcats 39-yard line. P.J. Walker capitalized on the short field position and found wide receiver Sam Mobley for a 39-yard go-ahead touchdown giving the Roughnecks an 18-17 lead.

At halftime fans were loving what they were seeing, for the first time there was a real alternative football league, the XFL did not look like a joke, in fact, it was far from one, with loads of talent both on and off the field.

In the third quarter nothing got easier for the Wildcats especially on the offensive side of the ball. For the Roughnecks it was all clicking and you had to attribute a lot of that success to quarterback P.J. Walker. Walker had a high completion percentage throwing on the run. He threw for 272 yards and tossed four touchdowns throughout the evening.

The Roughnecks, after forcing the Wildcats to punt, drove downfield with wide receiver Kahlil Lewis finishing the drive on a wide-open 4-yard score. Houston then split the uprights after previously missing, giving them a 12 point lead over the Wildcats.

With the Wildcats offense seemingly nonexistent, a quarterback change took place when Jalan McClendon took the field for Los Angeles. Different quarterback, same result, as he fumbled a handoff, (McClendon would recover) he then threw an interception as free safety Deatrick Nichols was prepared for the tip drill and took away the possession.

With a comeback out of sight, it only got worse for the Wildcats as defensive back LaTroy Lewis hit the quarterback triggering a strip-sack where Roughneck linebacker DeMarquise Gates recovered. James Butler plowed forward into the endzone for a 4-yard touchdown, increasing the score and eliminating the Wildcats hope.

Ultimately it was a thrilling – action-packed game and both teams now know their strengths and weaknesses. As a Roughnecks fan, it will be exciting to see how P.J. Walker develops as well as the coaching scheme. The Roughnecks will take on the Tampa Bay Vipers at TDECU Stadium Sunday night.