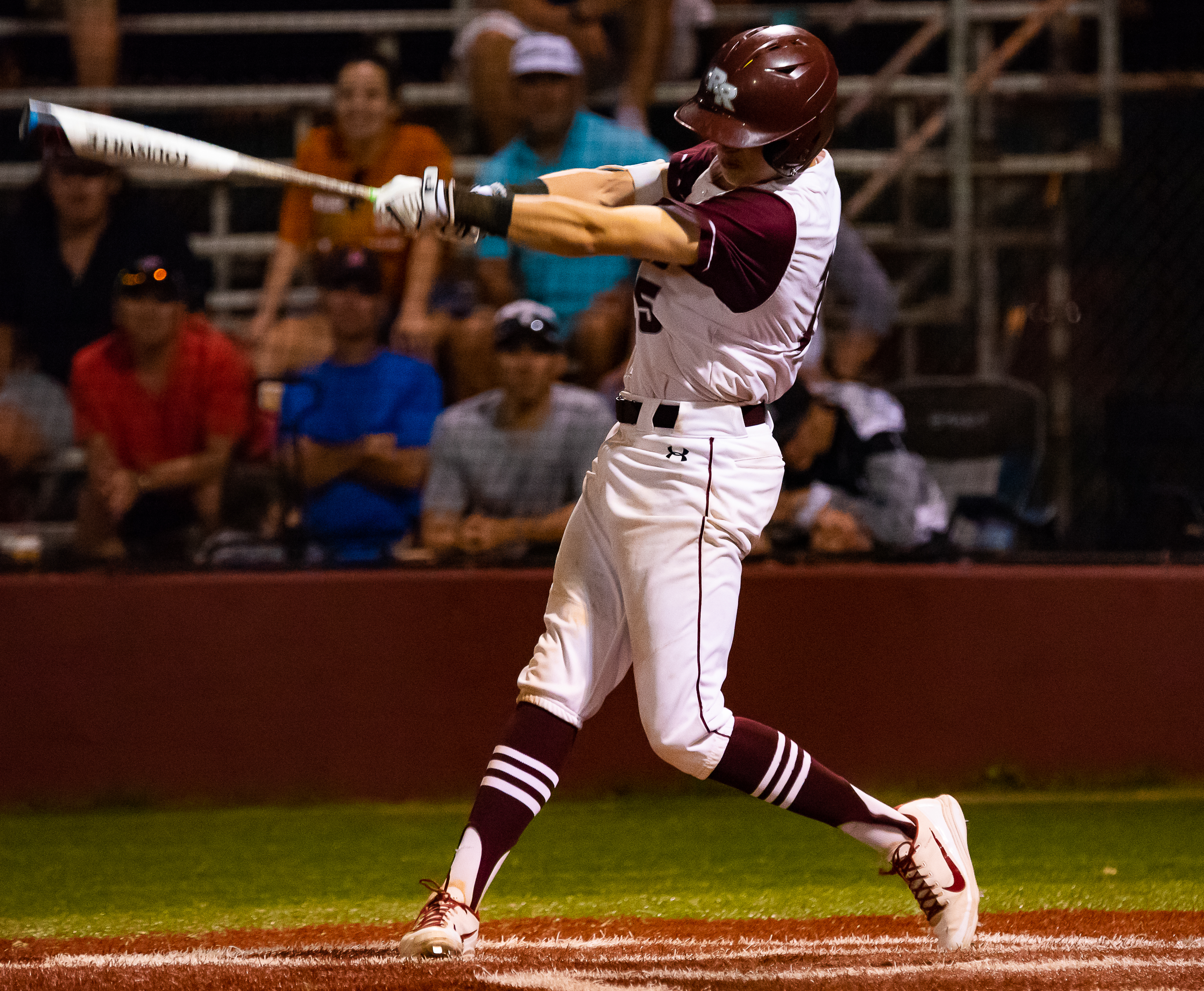 Saturday was another great afternoon to be an Eagle, as No. 1-ranked Georgetown blasted Pflugerville Weiss 13-0 at home in a winner-take-all Class 5A bi-district playoff contest.

The Eagles (32-2-1) invoked the 10-run mercy rule after notching 11 hits and doing all of their damage offensively in the first and third innings.

Georgetown took a 5-0 lead in the bottom of the opening frame thanks to RBIs from Ty Tilson, Jackson Sioson, Wesley Dixon and Grant Wood in addition to a double steal that allowed Wyatt Childress to swipe home.

With starting pitcher Jack Brinley in cruise control mode, the Eagles struck for eight more runs in the third. Dixon posted an RBI triple before he was brought in by a single from Wood, and Jeffrey David soon added an RBI double. Georgetown also received an RBI single from Cole Posey and saw Sioson cap the game’s scoring with an RBI triple to right field.

Sioson finished 3 for 3 with two RBIs and two runs scored, while Wood was 2 for 3 with a pair of RBIs as well.

Brinley got the win after tossing four scoreless innings and striking out six. Ryan Courtney worked the final inning and fanned two.

Head coach Adam Foster’s team is now slated to battle College Station in the area round.

The Rouse Raiders made short work of Bastrop Cedar Creek after notching 8-3 and 2-1 wins this past weekend to move on to the second round of the 5A postseason.

Rouse (21-10) overcame a 2-0 deficit in its bi-district series opener on Thursday by scratching across six straight runs in the third and fourth frames. Connor Bennett was a huge part of the triumph, as he went the distance from the bump with 10 strikeouts and also finished 2 for 4 with a pair of doubles and an RBI.

Dalton Porter launched a two-run home run to tie the game in the third, and the Raiders plated two more runs on an error to take a 4-2 lead. Rouse took advantage of seven Cedar Creek miscues in the opener.

Game 2 on Friday was much more closely contested, with the Raiders finally breaking through for two tallies in the bottom of the sixth. Down 1-0, Rouse saw Fischer Kingsbery deliver a two-run triple to right field to bring in both Robert Mount and Lance Little.

Kingsbery, who started the game, then slammed the door shut on Cedar Creek by retiring three of the four batters he faced in the top of the seventh. Kingsbery allowed just four hits and notched five strikeouts in the win while also going 3 for 3 from the plate.

The Raiders will now turn their attention to the Porter Spartans in a second-round matchup.

District 13-6A champ Round Rock belted Bridgeland 13-2 this past Thursday in a one-game bi-district playoff.

The Dragons (25-10) jumped out to a 10-0 lead and brought the mercy rule into play by plating three more runs in the top of the sixth and then silencing Bridgeland in the bottom half of the frame.

Reagan Doss crushed a three-run home run to left in the first inning to help his team take a 4-0 lead, and he finished with four total RBIs. Colton Regan added a solo shot to increase Round Rock’s advantage to 7-0 in the third.

Jared McKenzie and Cameron Dayton also had big outings at the plate for the Dragons. McKenzie, the team’s leadoff hitter, went 2 for 3 with a triple, a double, three RBIs and two runs scored, while Dayton was 2 for 4 with a double and one run driven in.

Dayton also collected the victory from the hill after throwing five innings and giving up two runs on four hits while striking out three. Sean Swain tossed a scoreless sixth and struck out two of the three batters he faced.

Up next for Round Rock is a matchup with Conroe Oak Ridge in the upcoming area round.