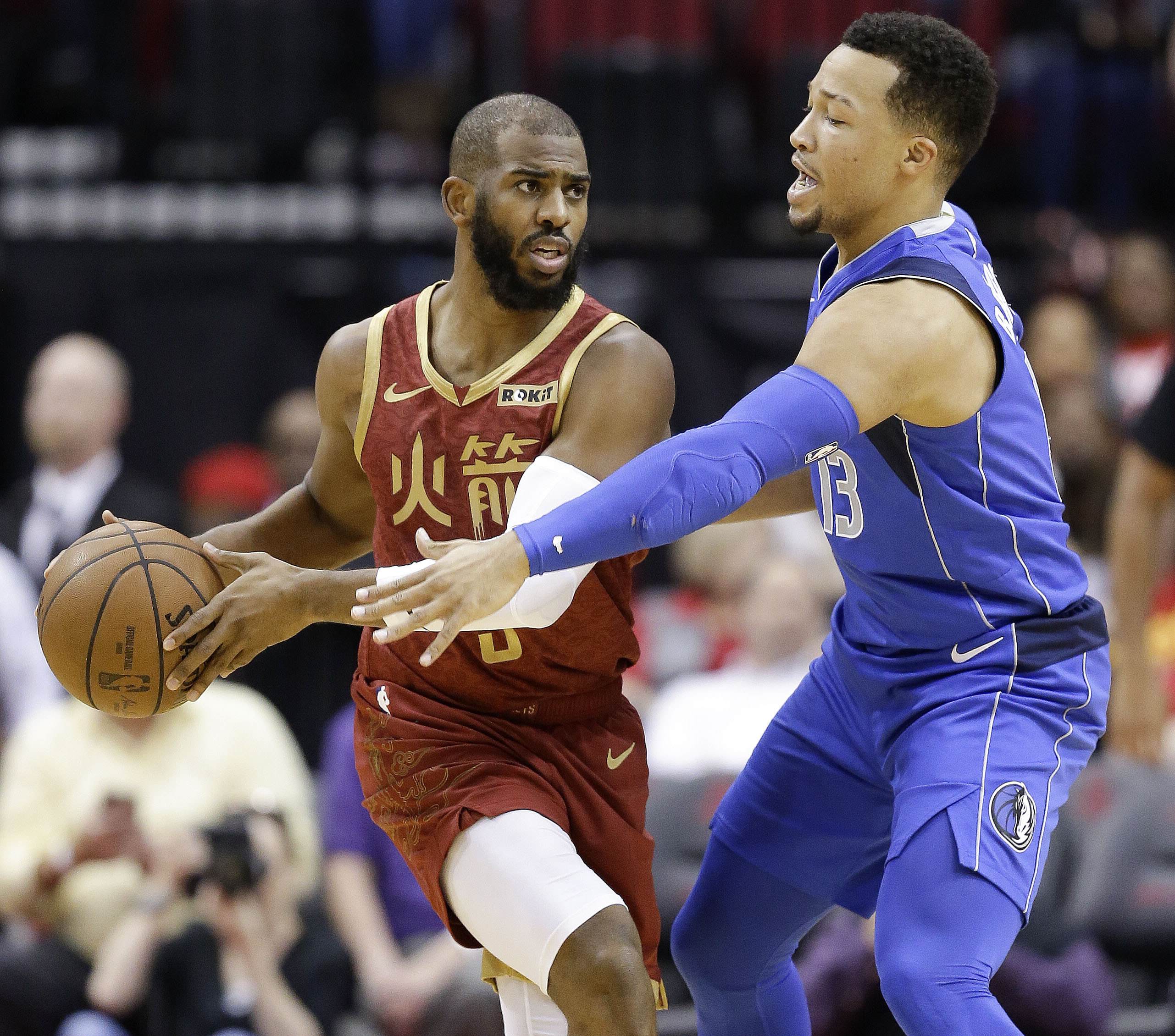 By KRISTIE RIEKEN, AP Sports Writer
HOUSTON (AP) — There was only a little over a minute left in Houston’s game and it looked as if James Harden’s streak of 30-point games would be ending.

Harden brought the ball down the court and was enveloped by two defenders near the 3-point line, so he passed to Chris Paul, who drew the defense away. After a couple of dribbles Paul turned and got it back to Harden, who stepped back and sunk a 3-pointer over Dorian Finney-Smith to keep the streak alive.

Harden scored 31 points for his 30th straight 30-point game despite dealing with a shoulder injury, leading the Rockets to a 120-104 victory over the Dallas Mavericks on Monday night.

Paul was asked if he was determined to help Harden extend the streak.
“For sure. He had what 28, so yeah, why not? We was up,” Paul said.
Harden, who had eight rebounds and seven assists, seemed to be a bit slowed early by the strained left shoulder that he injured on Saturday against Oklahoma City, making just one of his first seven shots. But he warmed up after that and finished 9 of 23, capped by his sixth 3-pointer with 52.9 seconds remaining. Fans chanted “MVP! MVP!” after he sunk the shot.

Harden denied that he was concerned about getting 30 points, but he did say it was a “credit to” Paul that he got the ball back to him.
“I was worried about winning,” Harden said. “They were making their shots. They were coming back, cut the lead to I think 10 or nine points … so I just wanted to get the proper shots … I was just trying to make the right play.”

Harden, who usually shies away from discussing any ailments, acknowledged that his shoulder was bothering him on Monday night and said he’d been receiving treatment around the clock since Saturday night.
“I couldn’t get the lift that I usually have from my shot,” he said. “But that’s no excuse. I’m just happy we won the game.”

Coach Mike D’Antoni could see that Harden’s shoulder was slowing him, and when he had just 20 points with less than three minutes left he thought Monday would be the end of the streak.

“I didn’t think there was … (a) way,” D’Antoni said. “But he was amazing.”
Houston had a 14-point lead entering the fourth quarter and was up 106-90 when Harden entered the game for the first time in the period with about 6 1/2 minutes left. The Mavericks went on a 7-0 run after that, with a 3-pointer from Jalen Brunson, to get within 106-97 with about 3 1/2 minutes remaining.

Harden heated up after that, making two 3-pointers in a 9-3 run to extend the lead to 115-100 with about 2 minutes left and put the game out of reach.
“We had a couple of good runs in the fourth and then they would come down and make a play,” Dallas coach Rick Carlisle said.
Luka Doncic had 21 points, 10 rebounds and eight assists for the Mavericks, who lost for the first time this season to Houston after winning the first two meetings.

Paul added 17 points with 11 assists, and Gerald Green scored 19 points with five 3-pointers to help Houston to its fourth win in five games.
The Rockets were up by 14 at halftime and Harden scored seven points in the first few minutes of the third quarter to help push the lead to 76-58. Harden later dished to Green for a 3-pointer to make it 85-66.
TIP-INS
Mavericks: Dwight Powell scored 12 points. … Brunson had 13 points and five rebounds. … Dallas made 13 of 36 3-pointers.
Rockets: Kenneth Faried had 17 points and eight rebounds. Eric Gordon scored 18 points. … Iman Shumpert had six points in his second game in Houston since a trade last week. … Houston made 23 3-pointers.
PAUL’S ASSISTS
On a night Paul moved into eighth place on the career assists list with 8,972, he reminisced about his goal of passing John Stockton for first place in steals and assists when he entered the league in 2005. No one is even close to the 15,806 assists and 3,265 steals Stockton had in his 19-year career with the Utah Jazz.
“I don’t like saying never but ain’t nobody catching him. I don’t know who the statisticians were who used to do the stats in Utah, but ain’t nobody catching that,” Paul said only half-jokingly. “That’s out.”
UP NEXT
Mavericks: Host Miami on Wednesday night.
Rockets: Visit Minnesota on Wednesday night.

On Basketball: Will Harden’s run end when he gets help?
Team LeBron rallies to beat Team Giannis, 178-164