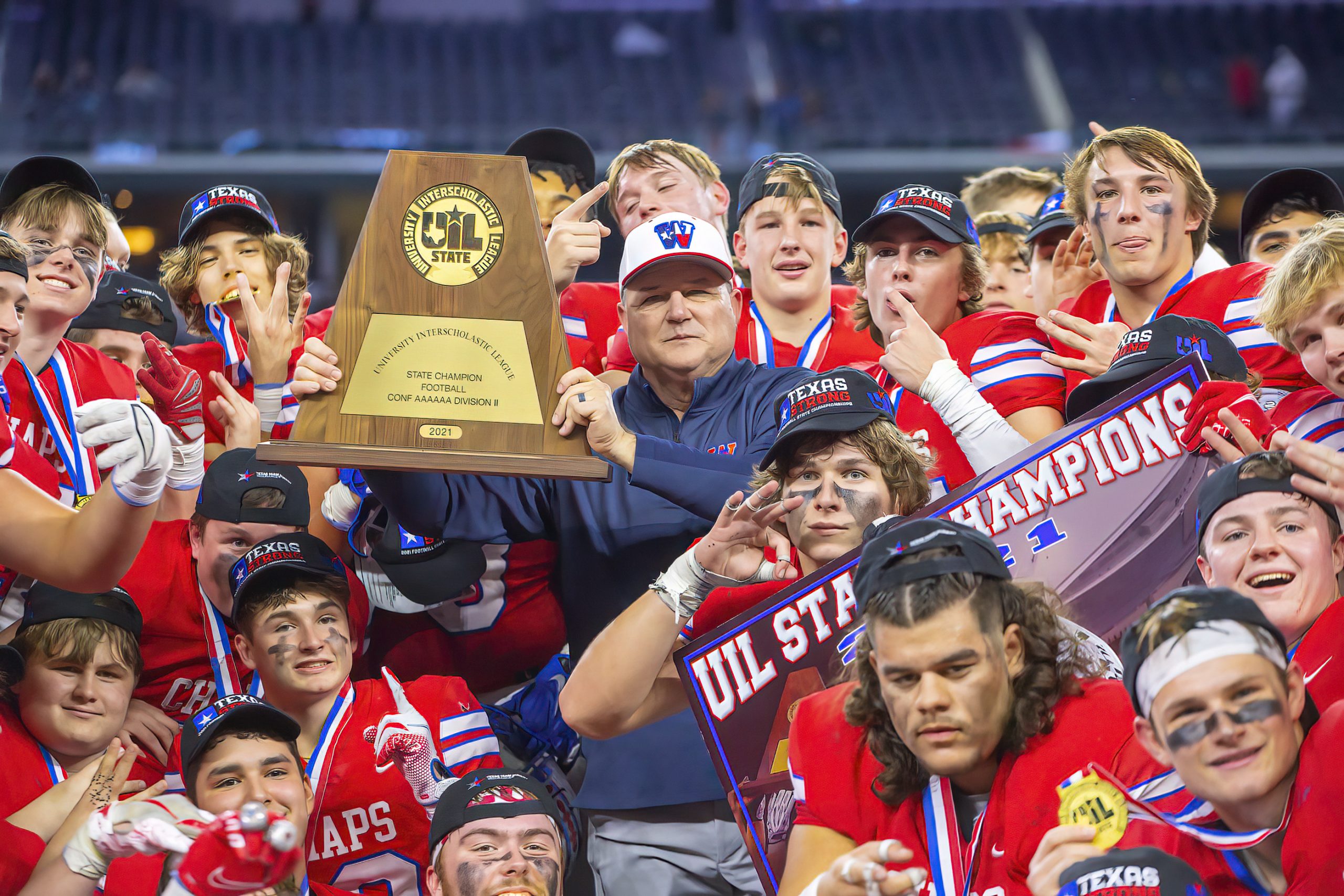 ARLINGTON — The Westlake Chaparrals have finished yet another season of Texas high school football unbeaten, unchallenged and unequaled.

Westlake (16-0) capped a rare three-peat after defeating Denton Guyer 40-21 Saturday night at AT&T Stadium in Arlington during the Class 6A Division II state championship game. The win gives legendary head coach Todd Dodge his second career three-peat, as he won in 2004, 2005 and 2006 with Southlake Carroll before claiming titles in 2019, 2020 and 2021 with the Chaps.

It was also the final game for Dodge, who steps away with Westlake riding an incredible 40-game winning streak.

“They’re going down in very rarified air,” Dodge said of his 2021 team. “To win back-to-back-to-back state championships, there’s only about five or six in the history of the state of Texas that have done it, and now we’re going to be a part of that.”

Guyer (14-2) made things interesting with a quick flurry in the first half that led to a surprising 14-13 halftime lead. However, Westlake turned on the afterburners in the last 24 minutes to accelerate past Guyer for good.

The Chaps outscored the Wildcats 27-7 after intermission to hoist yet another championship trophy.

“That was gritty,” Doddge said of his team’s effort in the second half. “I knew these kids had it in them. I knew they were not going to leave this three-year window and be remembered as a team that folded after one bit of adversity. They believed and they fought their tails off against a great Guyer team.”

Wildcats quarterback Jackson Arnold twice answered Westlake scores in the first half, as he ran in a 15-yard touchdown before finding Jace Wilson on a 9-yard score that put Guyer up by a single point at intermission.

The Chaps regrouped out of the locker room and saw Cade Klubnik hit Bryce Chambers for a 15-yard TD pass to give Westlake a 20-14 lead. Guyer rebounded and vaulted ahead once again following a 6-yard scoring run by Arnold, but the Wildcats were held in check for the remainder of the contest.

After Charlie Barnett set a new state championship game record with a 53-yard field goal to give the Chaparrals a 23-21 edge, the senior signal caller ended the third period with a 69-yard TD strike to Jaden Greathouse.

Klubnik then opened the fourth with a back-breaking score in which he found Greathouse for a 71-yard TD. Mark Sayegh tacked on a late field goal as Westlake cruised to a 19-point win in front of more than 32,000 fans in Arlington.

Klubnik finished the game 14 of 21 passing for 280 yards and four TDs, while Greathouse hauled in seven passes for 236 yards and three scores while setting a new state championship record for receiving yards in a contest and earning Offensive Player of the Game honors.

As for Dodge, he said after the game it’s time for him to finally enjoy some family time after helping Westlake build one of the most dominant dynasties in Texas history.

“I’ve got three beautiful grandchildren in the DFW area and I want to be a pawpaw and be around those guys,” Dodge said. “Elizabeth and I, at least here for a little while, are going to act like we’re retired.”