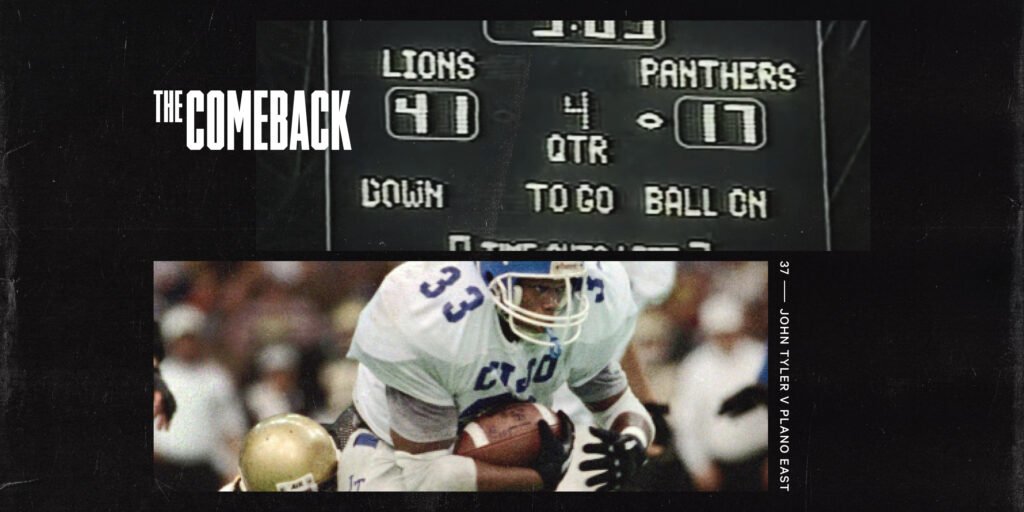 The game is winding down, and many of the 40,000-plus fans at Irving’s Texas Stadium have left.

With the Plano East Panthers trailing them 41-17 in the Region II semifinal in class 5A Division II, the Lions of Tyler John Tyler High School (John Tyler) are thinking beyond the next round of playoffs. Instead they’re dreaming of a state championship “Basically, the game was over. It was in our control,” John Tyler quarterback Morris Anderson told D Magazine in a November 2014 article. “And all we had to do was finish it out.”

His teammate, kicker Nico Hernandez remembers their coaches coming down from the press box. The Lions even put in their second-team defense. Both teams had come into the game with 12-0 records.

Plano East was a blue-collar group with a few all-stars peppered in, John Tyler basically a track team in football uniforms. Opponents feared their defenses. That season, John Tyler had been giving up, on average, about 14 points a game; Plano East less than nine. The Associated Press ranked Plano East No. 2 in the state poll; John Tyler at No 3.

It had been a relatively close game up until this point.

The Lions came into the fourth quarter with just a seven-point lead (24-17), soon after scoring a field goal to put the score at 27-17. Toward the end of the quarter with the Panthers on first and goal, the aggressive John Tyler defense stripped the ball away from Plano East quarterback Jeff Whitley. The Lions recovered the resulting fumble, and returned the ball 90 yards for a touchdown.

The Lions were by now ahead 34-17. Four minutes and 24 seconds remained in the game. “Then the next series,” Whitley said in the same article, “I dropped back to pass, they hit me, I fumble, and they [ran] it back for another touchdown. I mean, I was just devastated.”

The Lions lead 41-17, only three minutes and three seconds left to play. “Why the hell am I going back in this game?” Whitley said, admitting he expected the backup quarterback to come in at this time. “We thought it was over.”

But the Panthers are relentless, scoring on a two-play 70-yard drive, but miss the two-point conversion. The score is now 41-23, the Lions still holding on to the lead. Only two minutes and 36 seconds on the clock.

Then a little bit of Texas football magic.

Terence Green, Plano East’s wide receiver, is filling in for the usual kicker who had been booted from the team the week before. Green, in the final minutes of the game, executes three consecutive onside kicks.

Again that’s … Three. Consecutive. Onside. Kicks. (Green also caught a touchdown pass that brought the score to 41-23, and set up another touchdown with a 44-yard catch). And each time, Plano East – magically, unbelievably – not only recovers the ball but also drives it down the field for touchdowns.

Green later told D Magazine it was his first time doing onside kicks. “I did it with my toe. I toe-punched the ball. You don’t ever see someone toe-punching an onside kick, it’s always soccer style,” he said.

“But I was just thinking, ‘Hey, get this thing end over end, then change the speed up on them. See what we can do.’ I was wanting to get that end over end, almost like a ground ball in baseball. A bad hop can pop up and hit you in the mouth.” The first Plano East touchdown takes six plays, then a two-point conversion. They still trail 41-31 with a minute and 29 seconds left.

The second requires another six plays but ends with a failed two-point conversion, bringing the score to 41-37. There are just 56 seconds to play. An extra point follows Plano East’s final touchdown, a pass from Whitley coming in just three plays. Only 24 seconds remain in the fourth quarter as the Panthers take the lead, 44-41.

“I just remember thinking that I have never seen – from the field looking up into the stands – people going that crazy,” Whitley said. “It was a surreal moment. … I guess after the second onside kick, and then we score, then you start saying, ‘Lord, if we get this, then we’ll probably win this game.’ ”

But in the final seconds of the game, there is quite the twist.

On his final kickoff, Green sends the ball high into the air. It falls into the hands of John Tyler kick returner Roderick Dunn, who had already mishandled two of Plano East’s onside kicks.

Lions coach Allen Wilson, also in the D magazine article, said he thought the ball was going over Dunn’s head. “Rod could’ve just looked at it and let it go out the back of the end zone. But instead he goes back and fields it on the three-yard line. The rest is history.”

Dunn then runs the ball up the field 97 yards for a touchdown with 11 seconds left on the clock, the only touchdown of his entire high school career. Truly amazingly, John Tyler has taken back the lead at 48-44.

In the final seconds of the game, Plano East’s brief possession ends in merely two plays with an interception, and the Lions win the game.

And then the state title. The Lions then won the Class 5A Division II championship, beating Lake Highlands, Arlington and, finally, Austin Westlake in the title game.  The game was such a powerful story that it won ESPN’s 1995 ESPY Award as Showstopper of the Year.

Coach Wilson, in the same article, said the game wouldn’t have the same resonance it does today if the winner hadn’t went on to win the state title. “It lives in the lives of the kids who were there, the fans who were there. They relive it, probably not every day but periodically,” Archie McAfee, then the Plano East principal, told D Magazine.

“When they watch another team get down, they think, ‘Aha. Maybe this will be another Plano East-John Tyler comeback.’ It gives people hope that things like this can happen.”