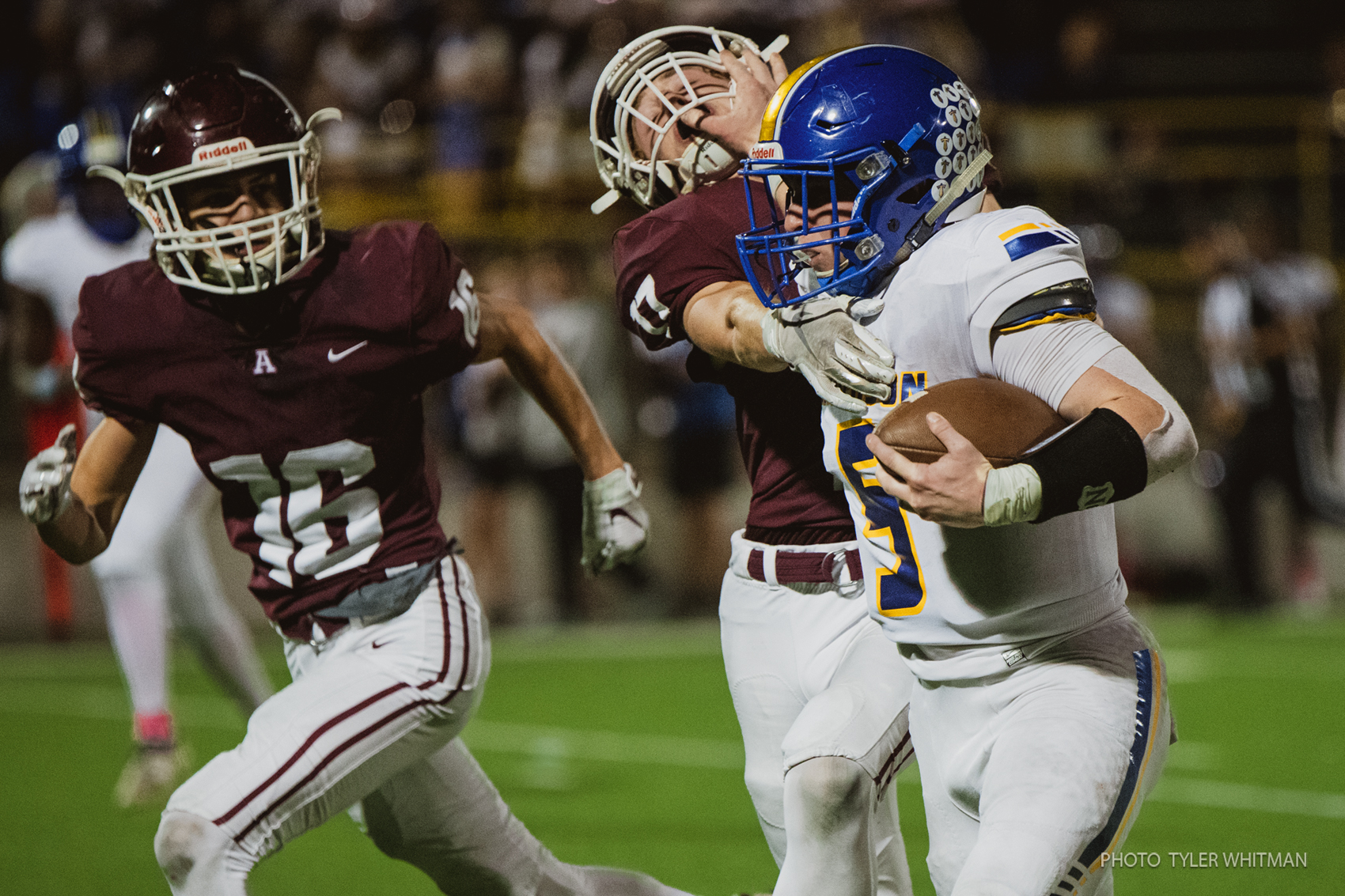 As the sun set and the lights came up on House Park the Anderson Trojans took on the Austin High Maroons in a high octane shootout. Anderson looked to further themselves in the playoff race while the Maroons looked to defend their home field. Anderson came away with a win 70-49 over the Austin Maroons in a game where both teams combined for over 1000 yards.
Anderson, who received at start of the game, employed a similar tactic to Hays high school, as they loaded the offensive line and ran the ball on 1st and 2nd down. After that proved unsuccessful, Anderson took to the air by throwing a 38-yard pass from senior quarterback Carsten Gross to senior receiver Jason Seager. After running the ball five consecutive times junior running back Joseph Baran was finally able to cross the goal line.

Attempting to get right back in the game, Austin High went for it on 4th & 7 from their own 26-yard line. Ultimately not getting the 1st down set Anderson up in fantastic field position. Anderson capitalized on the short field as Gross connected with wide receiver Grose Kiel on a contested end zone catch that put Anderson up by two scores.

Matters only got worse for Austin High on special teams. Anderson, looking to keep the momentum flowing called for an onside kick. Muffed by Austin, Anderson recovered setting them up with excellent field position once again. Anderson took full advantage of it, as 6’4” quarterback Carsten Gross powered his way into the endzone for a 1-yard touchdown putting Anderson up by 21.

Forcing Austin to punt, Anderson could seal the game away with a score right here. Austin’s Defense was going to put a stop to that as they forced and recovered a fumble. Iowa commit quarterback Charles Wright needed to make a play if he wanted his team to stay in the game. He did just that finding Matt Ruiz on a 17-yard score, just like that Austin was back in the game.

Both teams continued to score matching blow after blow. The Trojans scored as senior receiver Grose Kiel climbed the ladder on a 19-yard jump-ball touchdown. Carsten Gross scored on a 3 yard QB keeper. Sophomore Colin Page hit the sideline and crossed the goal line for a 15-yard rushing touchdown.

Austin was also productive as they moved the ball downfield at a fast pace. Talking about fast-paced, Matt Ruiz scored again off a WR screen in which he ran up the sideline for a 48-yard touchdown. Austin scored on another big play as Charles Wright found Nick Anderson over the middle for a 59-yard touchdown. On the final play of the second half, Charles Wright found Grayson Davis on a wide-open swing pass for a two yard score.
Heading into halftime Anderson was in the lead, though Austin was fast approaching. Both teams needed to improve their defense as neither offense could be stopped. For Austin, it was about winning jump balls and stopping quarterback Carsten Gross who trampled the Austin defense play after play. For Anderson, it was about limiting big plays. The majority of Austin’s Scores came on either a big play or were set up by one. If Anderson could limit this, their defense would be more effective.

“We have to do a better job stopping the run”, said Anderson head coach Daniel Hunter. “People may look at how many passing yards we gave up and think we need to improve on our coverage but real football people understand that if we stop the run than we don’t allow as many 1st downs and a byproduct of that is less opportunities to throw the ball downfield. We have given up 300 yards passing and Won the game, but we have never given up 300 rushing and Won a game. Rushing the football and stopping the run, is still the most important part of football.”

Despite any adjustments, the coaches made at halftime both offenses could and would not be stopped in the second half. Carsten Gross threw for two Touchdowns and ran four in, totaling 185 passing yards and 114 rushing yards. On the receiving end, Grose Kiel caught both touchdowns and totaled 98 receiving yards in the game. Colin Page lead the team in rushing as he went for 159 yards and two scores on the ground.

Coming into the game Trogan’s Carsten Gross and running back Joseph Baran were tied with 59 carries on the season. It was not uncommon to see Gross on both designed and improvised runs, which proved to be an effective strategy when Austin shut down Anderson’s passing attack.
Both run games were firing on all cylinders as Anderson totaled over 400 rushing yards and had a total of eight rushing touchdowns. Austin’s Grayson Davis also put in work as he ran for over 160 yards and made a difference in the receiving game with two touchdowns.

“I thought Charles Wright was a game-changer on Friday night”, said Austin Head Coach Michael Rosenthal. “(Wright) He had 6 TD’s and threw for over 350 yards. He took care of the football. Matt Ruiz also had a great game as well. He had 9 catches for 138 yards and 3 TD’s It was by far his most productive game of the year.
I am looking for our physicality to improve. I think we have had moments on both sides of the ball this year where we have blocked well and tackled well. We are looking for more consistency and to put a complete game together. We need all 3 phases to have their best games against Bowie and Akins.

I think this year’s team has had to deal with more adversity throughout the year. We have gotten very close at times to getting over the hump, but we just need to find a way to make one more play and we haven’t done that yet. I am looking forward to the final two games to see our best effort each and every play.”

From here Austin has a matchup with Bowie and Akins to finish out the season. Anderson finds themselves in a different situation as they are fighting Bowie, Hays and Del Valle for the remaining two playoff spots. Anderson will look to beat Lehman in what could be considered a favorable matchup.

“We felt good running the ball with our backs and the quarterback run game”, said Anderson Head Coach Hunter, when asked what was the most effective part of the game he could attribute this win to. “We threw in some reverse passes when we felt like they had became frustrated and started blitzing. All in all our offense had a great night, and our defense got the stops we needed to put some distance between the scores. Austin High has a great offense and we knew they would score some points on us we just came in with the mindset to jump on them early and create distance on the scoreboard”