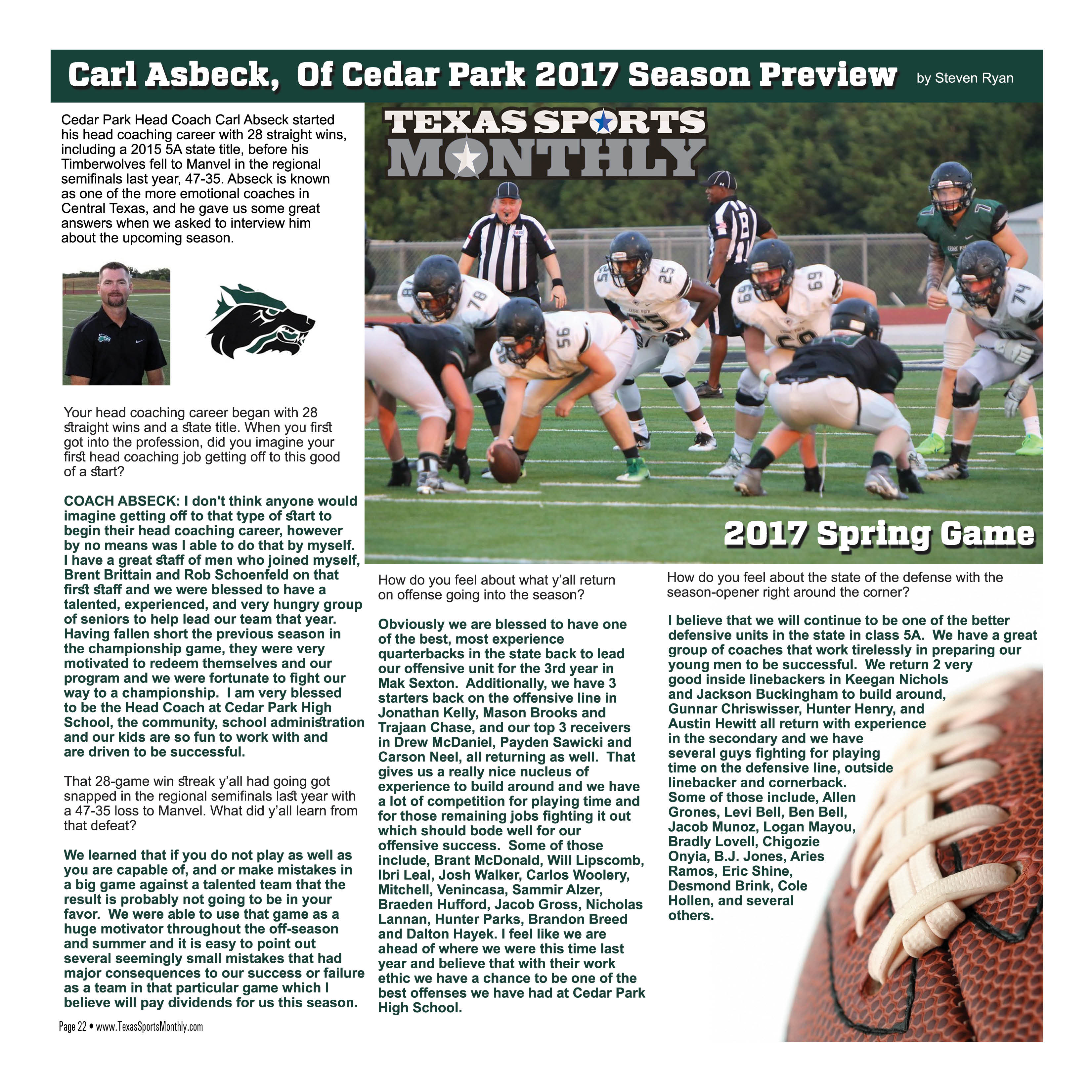 THE PRIDE of Cedar Park

THE PRIDE of Cedar Park

TSM: Your head coaching career began with 28 straight wins and a state title. When you first got into the profession, did you imagine your first head coaching job getting off to this good of a start?
Coach Abseck: I don’t think anyone would imagine getting off to that type of start to begin their head coaching career, however by no means was I able to do that by myself.  I have a great staff of men who joined myself, Brent Brittain and Rob Schoenfeld on that first staff and we were blessed to have a talented, experienced, and very hungry group of seniors to help lead our team that year.  Having fallen short the previous season in the championship game, they were very motivated to redeem themselves and our program and we were fortunate to fight our way to a championship.  I am very blessed to be the Head Coach at Cedar Park High School, the community, school administration and our kids are so fun to work with and are driven to be successful. 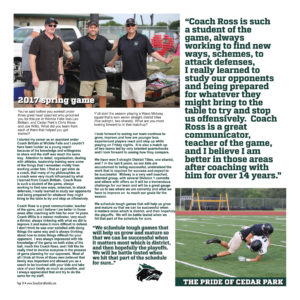 That 28-game win streak y’all had going got snapped in the regional semifinals last year with a 47-35 loss to Manvel. What did y’all learn from that defeat?
We learned that if you do not play as well as you are capable of, and or make mistakes in a big game against a talented team that the result is probably not going to be in your favor.  We were able to use that game as a huge motivator throughout the off-season and summer and it is easy to point out several seemingly small mistakes that had major consequences to our success or failure as a team in that particular game which I believe will pay dividends for us this season.
How do you feel about what y’all return on offense going into the season?
Obviously we are blessed to have one of the best, most experience quarterbacks in the state back to lead our offensive unit for the 3rd year in Mak Sexton.  Additionally, we have 3 starters back on the offensive line in Jonathan Kelly, Mason Brooks and Trajaan Chase, and our top 3 receivers in Drew McDaniel, Payden Sawicki and Carson Neel, all returning as well.  That gives us a really nice nucleus of experience to build around and we have a lot of competition for playing time and for those remaining jobs fighting it out which should bode well for our offensive success.  Some of those include, Brant McDonald, Will Lipscomb, Ibri Leal, Josh Walker, Carlos Woolery, Mitchell, Venincasa, Sammir Alzer, Braeden Hufford, Jacob Gross, Nicholas Lannan, Hunter Parks, Brandon Breed and Dalton Hayek. I feel like we are ahead of where we were this time last year and believe that with their work ethic we have a chance to be one of the best offenses we have had at Cedar Park High School.
How do you feel about the state of the defense with the season-opener right around the corner?
I believe that we will continue to be one of the better defensive units in the state in class 5A.  We have a great group of coaches that work tirelessly in preparing our young men to be successful.  We return 2 very good inside linebackers in Keegan Nichols and Jackson Buckingham to build around, Gunnar Chriswisser, Hunter Henry, and Austin Hewitt all return with experience in the secondary and we have several guys fighting for playing time on the defensive line, outside linebacker and cornerback.  Some of those include, Allen Grones, Levi Bell, Ben Bell, Jacob Munoz, Logan Mayou, Bradly Lovell, Chigozie Onyia, B.J. Jones, Aries Ramos, Eric Shine, Desmond Brink, Cole Hollen, and several others.
You’ve said before you worked under three great head coached who groomed you for this job in Wichita Falls icon Leo Brittain, and Cedar Park’s Chris Woss and Joe Willis. What did you learn from each of them that helped you get started?
I started my career as an assistant under Coach Brittain at Wichita Falls and I couldn’t have been luckier as a young coach because of his knowledge and willingness to share and the staff was much the same way.  Attention to detail, organization, dealing with athletes, leadership training were some of the things that I remember vividly from working under him. I find as I get older as a coach, that many of my philosophies as a coach were very much influenced by what I learned from Coach Brittain.  Coach Ross is such a student of the game, always working to find new ways, schemes, to attack defenses, I really learned to study our opponents and being prepared for whatever they might bring to the table to try and stop us offensively.  Coach Ross is a great communicator, teacher of the game, and I believe I am better in those areas after coaching with him for over 14 years.  Coach Willis is a master motivator, very much a thinker, always tinkering with what we did to improve it and make it more difficult to defend.  I don’t think he was ever satisfied with doing things the same way and is always thinking about how to make things difficult for your opponent.  I was always impressed with his knowledge of the game on both sides of the ball, much like Coach Ross, and I felt like he really tried to involve everyone in the process of game planning for our opponent.  Most of all I think all three of those men believed that family was important and allowed you as a coach to be involved with your kids and take care of your family as much as possible, and I always appreciated that and try to do the same for my staff.
Y’all start the season playing a Waco Midway squad that’s won seven straight district titles (five outright, two shared). What are you most looking forward to in that matchup?
I look forward to seeing our team continue to grow, improve and how are younger less experienced players react and step up while playing on Friday nights.  It is also a match up of two teams led by very talented quarterbacks and I look forward to seeing how they compare.  We have won 5 straight District Titles, one shared, and 7 in the last 8 years, so our kids are accustomed to being successful, understand the work that is required for success and expect to be successful.  Midway is a very well coached, talented group, with several Division 1 commits and others with offers so it will be a tremendous challenge for our team and will be a great gauge for us to see where we are currently and what we  have to improve on  to reach our goals for the season.  We schedule tough games that will help us grow and mature so that we can be successful when it matters most which is district, and then hopefully the playoffs.  We will be battle tested when we hit that part of the schedule for sure.

The Pfield opens for High School Football in PISD