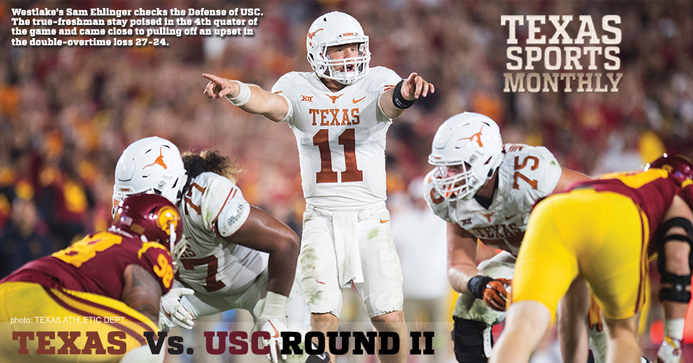 Texas fought valiantly but fell short in a 27-24 (2OT) loss to No. 4 USC at Los Angeles Memorial Coliseum in Los Angeles, CA on Sept. 16. Head coach Tom Herman said he doesn’t believe in moral victories, but there are positives to take from the Longhorns going on the road and almost beating the highly-ranked Trojans.
The defense played lights out. No, they couldn’t seal the deal when USC was down by three with the ball at its own 35 and 39 second left, but this game never would’ve got to that point if it wasn’t for a phenomenal effort by the unit as a whole. USC running backs Roland Jones II and Stephen Carr managed only 75 yards on 27 carries (2.8 avg.) after going for 235 yards on 34 carries (6.9) the week before against a Stanford defense that has long had a reputation as one of the best run-stuffing units in the country.
The Longhorns did a great job at plugging gaps and setting the edge, making it impossible for the Trojans to establish a ground game and leaving their offense completely one-dimensional. Todd Orlando’s crew stepped up with three 4th down stops, including a 4th & inches at the goal line, and even scored a defensive touchdown when junior Dashon Elliot intercepted a tipped pass and took it to the house. Linebackers Malik Jefferson and Anthony Wheeler combined for 23 tackles and 5.5 for a loss.
Sophomore wide receiver Collin Johnson showed up in a big way. The 6-foot-6 California-native repeatedly made big plays and ended up with seven grabs for 191 yards. On Texas’s first offensive snap, Johnson shoved down the cornerback giving him press coverage and hauled in a pass down the right sideline for a 48-yard gain. He also made a spectacular catch late in the first half by going practically through the cornerback to catch a ball thrown behind him.
There was also a diving grab for 24 yards early in the third quarter to help set up Texas’s lone field goal, and 47-yarder on the Longhorn’s final drive of regulation that led to the go-ahead touchdown. Johnson accounted for more than half of UT’s total yardage, and for parts of the game was all Texas had going on offense.
There was one big negative, however, that could have giant ramifications on the rest of the season. That was the injury to junior left tackle Connor Williams, who reportedly tore his meniscus and will be out for a significant amount of time. Williams was a preseason All-American who many scouts had already tabbed as a top-10 NFL draft pick. Without him in the lineup, it’s going to me much harder for Texas to get the pass protection and run blocking it needs to keep up in high-scoring Big 12.